I always feel a little pang of guilt whenever I give a kiddy film a negative review, because obviously they are made for small, easily pleased children and not hardened, 30-year-old cynics who spend their evenings sitting in front of a computer thinking of witty put-downs while wearing Batman pyjamas and eating pies. Thankfully, with Arthur Christmas, I don't have to feel bad, because – brace yourselves – it's an absolute Christmas cracker. Hands off, Robbie Collin – that one's MINE.


This should not come as surprising news, given that it's from Aardman Animation of 'those adverts' and Chicken Run fame, in collaboration with Sony Pictures, who produced Aardman's first – and ace – digital animation Flushed Away in 2006. That means you can expect a sleighful of loveable characters, a number of inventively staged action sequences and a neat line in pan-generational humour that'll keep old farts like me from scoffing. More pies. A cloying subject matter means it has little awards potential, but it has just the same payload of cutting-edge tech and smart comic touches that Pixar deploy in abundance. Also, it's a rare delight to be able to say...

Arthur Christmas tells the TRUE STORY IF CHILDREN ARE READING of how Santa – along with his army of elves and giant red spacecraft – delivers presents to every child around the world with military precision. Back at the North Pole, we learn that it's a family of Clauses behind the drop; Jim Broadbent's portly Santa is the figurehead, Bill Nighy's Grandsanta is retired but still has the taste for action, Hugh Laurie's tech-savvy son heads up operations, while his brother, James McAvoy's Arthur, is the klutz hidden away in the mailroom. A gift is accidentally left behind, antics ensue, everyone learns that the true meaning of Christmas is presents. Right?

Well... yes. But there's more to Arthur Christmas than that. It has heart. Really and truly. Arthur is the movie's hero, a naïve yet well-meaning gommo, but it isn't just him providing the Christmas spirit. There's a lovely message about family and unity that all comes together at the movie's climax, a surprisingly moving scene between three generations of Santas that you realise the whole movie has been leading to – if this strand of the story is the tree, the rest is all fancy tinsel and animated 3D baubles. It's cheesier than a cheesy cheese thing, but has more goodwill than any Generic Vince Vaughn Christmas Comedy. 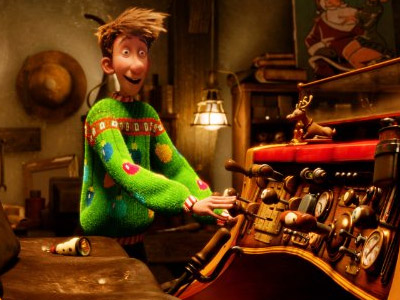 You'd never get Vince Vaughn in that jumper, either.


Those tinselly bits? Brilliant, by the way. Action scenes, like a breakneck sleighride through the snowy Toronto streets ("We always used to cut through Canada, nobody lives there"), are expertly and breathlessly directed by Sarah Smith. And yeah, even though the Christmas elves are basically just the same animation model copied and pasted a billion times over (see also: the slugs in Flushed Away, the minions in Despicable Me), a voice cast of repute give them individuality, particularly Ashley Jensen as a wee Scottish wrapping elf with a mohawk. Their scenes, particularly the opening gift salvo, are exhaustively clever – I loved the scene in which a present had to have its batteries removed, much in the same way a bomb would be defused, before the recipient woke up.

If you hate Christmas, it won't exactly melt your frozen, icy heart, but if you have any warm blood pumping through your veins, Arthur Christmas will snuggle you up into a big, hearty festive cuddle and refuse to put you down until you've hugged it back. It's up there with Elf and Bad Santa as modern Christmas movies that'll stand the test of time.

More:  Arthur Christmas  Aardman  James McAvoy  Bill Nighy  Jim Broadbent  Hugh Laurie
Follow us on Twitter @The_Shiznit for more fun features, film reviews and occasional commentary on what the best type of crisps are.
We are using Patreon to cover our hosting fees. So please consider chucking a few digital pennies our way by clicking on this link. Thanks!