As Above, So Below

On a rainy August night, I was subjected to an odd and unusual experiment. In the name of science, I was strapped to a heart monitor and readings were taken of my body's response to As Above, So Below to determine how many calories I would burn watching a horror film. Unaware that I'm a complete badass and scared of nothing, the foolish scientists were in for a shock – it was clear to me that I would completely skew their results with my super-human powers (I recently ran 2k on a treadmill without stopping). However when the film finished, the results disturbed us both...

Upon arrival at the screening, the boffins from Brunel University took down my vital statistics and strapped a heart monitor to my ribs. This would feed back my heart rate during the movie, after which I would be able to see how many calories I had burned. I'm pretty sure, at this point, I heard them murmuring the words 'midichlorians' and 'off the chart' but we pressed on, nonetheless.

10 minutes before the screening was due to start, a trolley came out and a waiter started to load up the table in front of me with food: mini pizzas, toasted pittas, hummous and potato wedges.

As I gingerly made my way to the table, I was informed that the food was for another group and that I should go and sit in the screening room and fill in the mental health questionnaire.

Settling into my seat, I prepared myself to be scared shitless. The trailer had piqued my interest – a bunch of good-looking explorers go beneath the Paris streets, where there are a lot of bones and then some horrible stuff happens. As part of a faux-documentary (the purpose of which is never revealed), we are introduced to Scarlett (Perdita Weeks), an unfathomably young archaeologist being interviewed about something. I wasn't really paying attention because I was still thinking about the mini pizzas.

Scarlett had previous footage of herself trying to take a picture of something forbidden in Iran, whereupon her camera helmet picked up something a bit creepy. Heart rate spiking, I found myself intrigued, despite her plummy and annoying British accent. 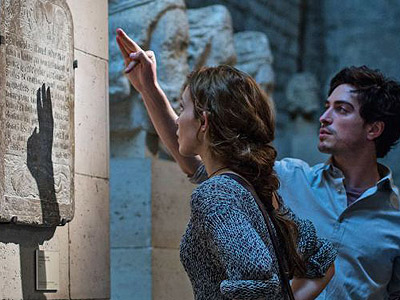 Every good heroine has a quest, and Scarlett's is to locate The Philospher's Stone, maybe because she's a huge Harry Potter fan, I don't know. She's a fairly interesting girl, is Scarlett – she speaks six languages and has travelled extensively retrieving valuable artefacts, a bit like Lara Croft but with longer trousers. She's the kind of girl you meet at a party and hate immediately because, at 26, she's done more with her life than you'll ever do in a thousand lifetimes.

Scarlett travels to Paris with her cameraman Benji (Edwin Hodge) to meet with her crush George (Mad Men's Ben Feldman). He's fixing a large bell, which suddenly starts ringing very loudly, and causes my heartbeat to shoot up. I'm a badass, but I hate loud noises.

After a bit of exposition that sounds likes it's been lifted straight from the pages of The Da Vinci Code (and is just as awful), Scarlett outlines her plan to raid the Parisian catacombs for The Philosopher's Stone to a reluctant George. Benji just watches.

A quick search of the hip underground Parisian club scene leads us to the French hipsters who will help Scarlett explore the uncharted maze of bones beneath the Paris streets. There is Papillion (Francois Civil), your typical louche Frenchie, and his two spelunking mates Zed and Souxie. They rope up and then the fun really starts, and by fun, I mean there's some jumpy stuff that comes out of nowhere when nothing's happening.

I am still thinking about the mini pizzas.

And so the descent into the catacombs begins, and the clichés are flying thick and fast. It's evident that things aren't quite as they should be, but then how should things be in the city of the dead? There's a creepy choir practising down there, and a piano like Mr Mad Men fella had as a kid but the middle C didn't work – OH MY GOD, this one doesn't either. That's... not that spooky actually. I'm also pretty sure that's from The Goonies. A mysterious ringing phone starts to build a sense of eeriness and then nothing happens. There's a lot of climbing, skin being gouged, stuff hovering on the edge of the frame, but that's about it.

I'm starting to feel a bit sleepy and wonder if I've left my umbrella outside the screening room. What if it's still raining? I wonder if I'll have time to get something to eat afterwards. I really fancy a pizza. 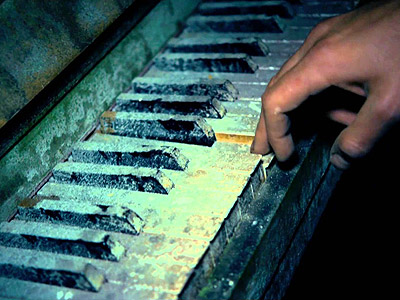 The gang are trapped and they've got a creepy guy called The Mole with them, who has been underground for six months and just stares off into the distance before laughing hysterically that "the only way out is down" (he's not a Yazz fan). It seems the signposts to Hell are simply pretty wall murals reminding you that it's probably not a good idea to go this way, particularly when so far you've heard a baby crying, spooky whispering and you are also about 300 feet below sea level and running out of battery power.

My heart rate increases as Scarlett's nonsensical train of thought incenses me, as she tries to solve a puzzle to get out of the room: "You see that carved into the stone, that's a beetle... errr... beetle, scarab... Egyptians! Egypt... it's got falafels, the Sphinx... Pyramids! Pyramids are three-dimensional triangles... I've got it! It's an archaic lever and pulley system!"

This girl speaks six languages but would be out on the first task on The Crystal Maze.

Nearly everyone's been offed by some unseen force by now, and I'm a bad person for being glad they're dead, because then at least something has happened. There is a lot of running around, people facing their fears, some blood, and some Indiana Jones-type set-ups. The only way the university boffins know I'm alive is the odd flicker of interest when the camera whips around, only to reveal nothing only to reveal ARRGGHHH! SOMETHING A BIT SCARY, oh no, that's over now. 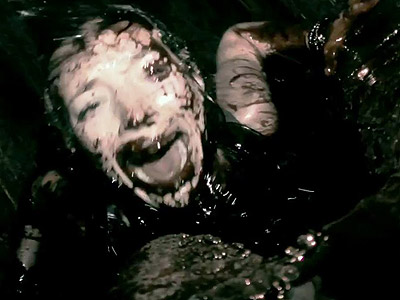 
What should be an incredibly creepy and intriguing film unfortunately falls flat: while there are some good visuals of the catacombs and some genuinely upsetting feelings of claustrophobia, all the creepy stuff is kept to the edge of the frame, feeling as though it's just beyond reach. Anything that is meant to be scary is heavily signposted by the camera whipping around and it doesn't take long to work out that there'll be something a bit unsettling when it whips back for a split second.

The Dowdle brothers on directing and producing duties do an admirable job of creating a sense of unease but their reliance on reusing the sets to give the impression the explorers are traversing an inverted world gives the impression of a slightly more adult version of Scooby Doo. It just isn't scary or clever enough and doesn't really gain momentum until a last minute dash towards a toe-curlingly obvious resolution.

The thrills mainly come from what might happen, as opposed to what does; those with an overactive imagination will probably be terrified for the majority of the running time, trying to fill in the blanks. What we do learn, however, is that Hell is a manifestation of fears within your own psyche, in which case my journey through the catacombs would be watching an endless loop of Peter Andre's 60 Minute Makeover.

Film over and heart monitor off, I was given the results of the experiment. Totting up the figures, it was calculated I had burnt about 94 calories, which is equivalent to a small smoothie. Or a mini pizza.

More:  As Above So Below  Drew Dowdle  John Erick Dowdle  Perdita Weeks  Ben Feldman  Edwin Hodge
Follow us on Twitter @The_Shiznit for more fun features, film reviews and occasional commentary on what the best type of crisps are.
We are using Patreon to cover our hosting fees. So please consider chucking a few digital pennies our way by clicking on this link. Thanks!