Let’s consider what could be the making of a cult film, shall we? High concept? Check. Low-budget? Almost always. A hyper-stylised language? Most definitely. Written and directed by one half of a cult comedy duo? Erm...sure. Aliens? Hell yes. And yet, while all signs point to ‘culty’ for this film, it actually has all the mainstream appeal of a brilliant comedy and a terrifying supernatural horror. And being both at once is just sheer bloody genius.

Genres meld together as B-movie sci-fi mixes with gritty adulthoodlum drama and, of course, absurd LOLs but, surprisingly to those expecting an all-out humour-fest, the frights-to-laughs ratio remains strictly at 50:50, with the film refusing to fall completely into either the comedy or horror film category.

The plot is wonderfully simplistic: a gang of hooded teens with a penchant for petty crime, led by the tough and dirty Moses (Boyega), stumble upon a crashed meteorite and kill the alien that emerges. Soon enough the sky is filled with more meteorites containing vicious invaders and they seem intent on revenge. What follows is an energetic flurry of comedy and scares that never really lets up throughout the entire film’s duration.

Instantly noticeable is the outrageously contagious street slang used by the central gang (other film sites will no doubt resort to imitating this in their reviews but I’m going to refrain for fear that I’ll come across as a middle-aged Media Studies teacher trying to relate to his class). At first, the council estate teen-speak seems like it might be a tiresome obstacle in the film (and still might be for US viewers), but the buzz words and phrases are actually as easily understandable as they are instantly quotable and, as you come out of the cinema, you’ll be calling everyone ‘blud’ and telling them to ‘allow it’ (at risk of sounding like a douchebag). Think of the alt-speak in A Clockwork Orange, and you’ll be closer to the mark. 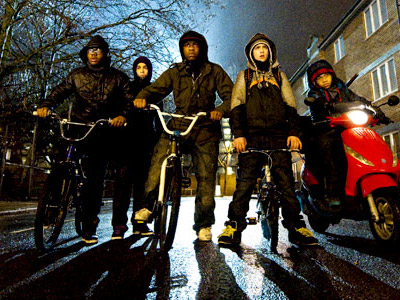 For some reason, the leader isn’t the kid with the moped.


One of the best features of the film is the alien design itself. The shadow-black figure looks more like a complete absence of anything at all – like a living, snarling vacuum whose existence is only given away by the neon glo-light fangs that always seem within snapping distance of their next victim. As far as ETs go, these are easily the most original-looking in years.

However, if there is any criticism to be levelled at the film, it’s in relating to the central characters – how are we supposed to root for a gang that start the film terrorising an innocent woman and whose members are too numerous to really get to know each one? While this is admittedly something that many will have a problem with, you can’t fault a film that actively addresses this issue head on.

It is made clear that these kids have a broken upbringing, and the film thankfully doesn’t dwell on the implications of whether or not their misdemeanours warrant being ripped apart by alien gnashers. Do you want the kids to get away with knife crime? Of course not. But in any battle between humans and aliens, no one is in any doubt about who to cheer on. 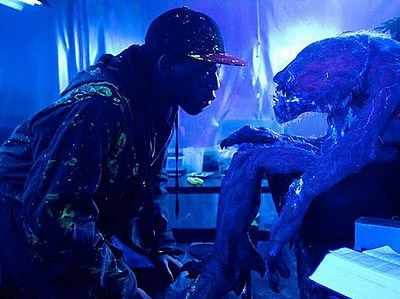 It’s always awkward when the lights come back on at the end of a rave.


In any case, the gang’s moral ambiguity is forgiven in light of the bravado they show in defending their turf and protecting those on it, including independent young nurse Sam (Whittaker), who is the gang’s mugging victim at the start of the film, a group of local girl friends and a permanently high drug dealer Ron, played by Nick Frost who, contrary to the big-name-heavy marketing, isn’t actually in the film all that much.

A lot of the best lines, however, go to University toff Brewis (played with mummy’s boy cowardice throughout by Luke Treadaway), who offers middle-class opinions on their situation from the stoned comfort of Nick Frost’s sofa that contrasts brilliantly with the gritty frontline experiences of the young hoodlums.

Overall, the film is as fun, silly and scary as those chucklesome monster movies from the 80s like Tremors, Critters and Gremlins (all films that Joe Cornish name-checked when introducing the film at the screening). Does that make it ‘cult’? What does that even mean anyway? That not enough people go to see it at the cinema? If that’s the case, Attack the Block doesn't deserve to be remembered as a cult film – just as a bloody brilliant one.

More:  Attack The Block  Joe Cornish  Alien Invasion
Follow us on Twitter @The_Shiznit for more fun features, film reviews and occasional commentary on what the best type of crisps are.
We are using Patreon to cover our hosting fees. So please consider chucking a few digital pennies our way by clicking on this link. Thanks!