THANOS FOR THE MEMORIES 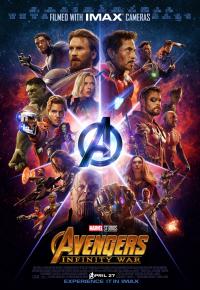 In every way that matters – and it matters in every way – Avengers: Infinity War is basically the biggest movie ever. Ten years in the making, producing some of the highest grossing films on record and some of the most recognisable characters and franchises in the world, it’s astonishing that this climactic crossover event combining all of them in one big-screen adventure is even possible. What’s more astonishing is that it somehow meets every single impossible expectation you have for it.


To be fair, it’s only because you’re stupid. You think that Marvel has already shown you all it has to offer, that there’s only so much more superheroing you can take, that you’re sick to death of big CGI smash monsters and that this film in particular will surely suffer from being just the first half of a cynical two-parter. You’re wrong. Stupid and wrong. And not only does Kevin Feige know all of your stupid thoughts, but the Russo brothers know exactly how to play on them for their own amusement. Because as much as this is the culmination of 10 years’ worth of building towards an epic showdown, it is also the culmination of everything that Marvel has learned along the way.

Most of the usual criticisms that are aimed at MCU entries don’t apply here. No one feels particularly wasted or short-changed, no powerful moment is undermined for the sake of a quippy one-liner, and there’s no final act aerial assault posing as shorthand for spectacle. Also, more than ever before, after a decade of investing in these characters, there are real stakes, and the film knows it, daring you to expect a major character death at every confrontation. If Marvel knew their shit before, this is that shit refined to perfection.

Most importantly, Thanos is given real thought and motivation beyond the "Destroy the world! Raargh!" ambitions that have come before now. Trusting in the digital wizards at Marvel Studios, the Russos don’t shy away from spending time with their big bad, giving him moments of eloquence and pathos, all given extra weight behind the pixels by Josh Brolin’s dramatically hefty performance. Taking a cue from the source material, Thanos acts as the protagonist here, strolling between worlds and scenes with a sinister calm that belies the awesome devastation he leaves behind. With an almost reluctance, he seems resigned to his own unwavering will in collecting all of the Infinity Stones so that he can acquire the power to wipe out half of the universe and, in his eyes, restore its balance. 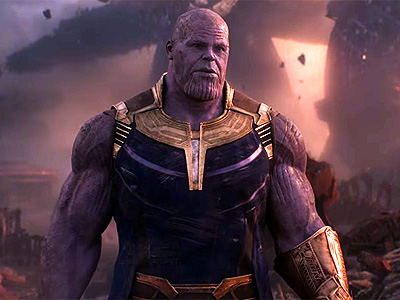 All of which is quite ambitious for a scraggy-faced space bellend.


This very idea of balance is a theme that runs throughout, both on the surface and as a model for the movie. After some initial disjointed introductions, the crossover starts working as a cohesive whole, never feeling out of step with the varied styles that have come before it. As fun comedy sits comfortably alongside epic stakes, daft interactions next to money-shot blockbusting, everyone is given equal value. And, while the most obvious criticism for the movie is that there’s no time for any of these heroes to have any particular arcs or journeys beyond the physical - this is, after all, a story told at breakneck pace - it can be forgiven here, because that time has already been put in with previous instalments.

"
"
As fun comedy sits comfortably alongside epic stakes, daft interactions next to money-shot blockbusting, everyone is given equal value
What that means is that the film gets to focus not just on its own ultimate team-up (most of the fun here is in these franchise stars meeting each other for the first time), but in the connections they have each made along the way. Vision and Scarlet Witch, Star Lord and Gamora, Gamora and Nebula, Thor and Loki, Banner And Black Widow, even Tony Stark and Pepper... these relationships are given due prominence as the film frequently returns to the idea of sacrifice, of dying to protect loved ones, even in spite of Captain America’s early assertion that "trading lives" is not an option. 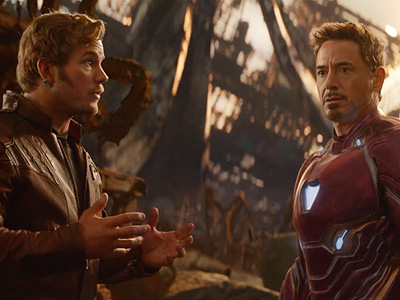 "Okay, um, Thor, you go with Rocket. Vision and Hulk, you're a team. Um... Spider-Man and Doc Strange? That could be funny. Don't usually see the two of you together."


It works because we can see that these characters are invested in each other as much as we are invested in them, and not only does this give the movie’s more powerful moments real impact, but it creates a neat through-line to the first Avengers movie in which Cap accuses Stark of not being "the guy to make the sacrifice play", only for Stark to ultimately prove him wrong. This is how heroism is defined in the MCU, so it makes sense that, when faced against their most powerful villain yet, the idea of this sacrifice play would be so prevalent.

Overall, it’s a masterful accomplishment and it’s difficult to think of anywhere that the film puts a foot wrong, barring perhaps Peter Dinklage’s slightly odd performance in what is the film’s only unfortunately static subplot. At the same time though, the movie surprises, shocks and delights. It offers comedy, welcomes tragedy, and delivers more payoffs than the accounting books of a Trump lawyer. In a film that should, by nature, be overcrowded to the point of self-destruction, it somehow achieves what has been Thanos’ goal all along: perfect balance.

More:  Marvel  Avengers  Iron Man  Captain America  Thor  The Incredible Hulk  Ant-Man  Doctor Strange  Spider-Man  Black Panther  Guardians Of The Galaxy
Follow us on Twitter @The_Shiznit for more fun features, film reviews and occasional commentary on what the best type of crisps are.
We are using Patreon to cover our hosting fees. So please consider chucking a few digital pennies our way by clicking on this link. Thanks!