I don’t envy Edgar Wright. I mean, I do, obviously. He’s stupidly talented, hangs out with cool Hollywood people and totally rocks the kind of facial hair you’d normally only see on a second-year arts grad student. But he is also under an awful lot of pressure to meet impossibly high expectations considering his relatively short film résumé. Think about it: two cult comedy classics, followed by the visually-impressive-but-niche Scott Pilgrim, and then a quick return to close off the Cornetto Trilogy. That’s it. Now everyone is ready to hail this new Edgar Wright movie as the champion of the summer, but what even IS an ‘Edgar Wright movie’?


It should be enough that the first 15 minutes of this movie live up to all possible hopes anyone might have. Launching straight into a heist getaway, we’re treated to a slick and stylish car chase sequence with neat flourishes and a groove-busting track, and then this is followed immediately by an extended walking tracking sequence composed of mind-boggling choreography and calculated synchronisation.

It doesn’t sound like much, but the way it plays out seems wholly fresh and original. It genuinely feels like a brand new cinema experience – it’s cool and funny and a pure joy to watch, and it will leave you paradoxically wondering “how did they film this” and “why has no one ever done this before” both at the same time. I’d wager that this is the exact feeling that most want from an Edgar Wright movie, and he just rolls it out in the same amount of time that it takes Michael Bay to present an establishing shot of a nondescript military base. 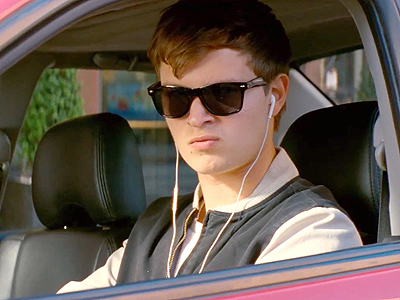 Seconds later, the car transformed into a robot, instantly killing Baby inside.


The truth is, though, that the film then never really lives up to these opening sequences. That’s ok, because it also never disappoints; it just zips along at a fast pace, cruising on cool characters and a nifty knack for nailing every beat in every scene. Its high concept sees savant driver Baby – who constantly listens to music to drown out tinnitus from a childhood car crash – questioning his own moral code when forced to act as wheel-man for Kevin Spacey’s criminally masterminded robberies, while at the same time falling for local singing waitress Debora.

As you might expect from Wright, the real fun here is found in the polished execution, which is as note-perfect as Baby’s own many killer tracks. What might come as a surprise, however, is that the film is ultimately quite gag-light. There are frequent flashes of humour, of course, but there’s also tons of tension and long stretches of whip-smart dialogue without a punchline in earshot. In fact, with its instant cult appeal, memorable characterisation, stylised monologuing and momentously badass soundtrack , there’s a clear Tarantino influence all over this film. Even Baby and Deborah, for all their misfit fantasist romance, have a hint of Clarence and Alabama about them. 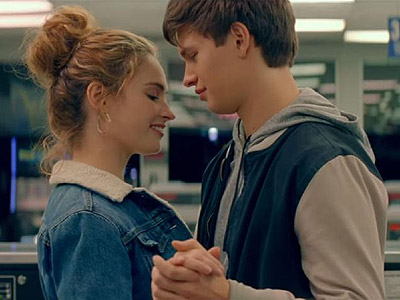 Just without the cocaine and prostitution and Gary Oldman.


Jamie Foxx gives a great psycho thief in Bats, as hilariously over-the-top as he is scarily unpredictable and Jon Hamm is a captivating smoothie as Buddy, one half of a hyper-sexed Bonnie-and-Clyde-alike relationship with Eiza González’s Darling. Ansel Elgort is rightfully the star of the show here though, taciturn at all times except when getting lost in his music, coming alive to dance and mime along like no one is watching. The effect of either behaviour is the same: whether the silently scarred young man with pockets full of sunglasses and ipods, or the infectiously goofy and animated show off, this kid is cool and there’s no way you’ll leave the film without wanting to BE him.

If there’s any criticism to be found anywhere among all of the made-to-order awesomeness, it’s that the film leans a little too heavily into its own soundtrack. All carefully picked before filming, allowing for sequences to be synced up in perfect time, Wright doesn’t allow any scene to pass without showing us Baby carefully selecting the right tune for the occasion. Famed for his previously great song-to-scene selections, in this instance, it feels like Wright just hasn’t been able to edit down his own mixed tape and is forcing as many of his favourite songs in as he possibly can. It’s not overkill, but it is a tad unnecessary.

So are we any closer to defining an ‘Edgar Wright movie’? Hardly. If anything this muddies the very idea further, choosing to move away from his previous light-hearted fare in favour of updating the 70s car thriller with added stunts and tricks. It’s another homage to a whole genre, and the slick style from Scott Pilgrim is clear and present here (the only bangers in this whole film are the ones being plugged into Baby’s ears), but this feels like something of a new direction; a more mature effort than we’re used to from the filmmaker. There’s not even a fence-jump gag.

More:  Baby Driver  Edgar Wright  Ansel Elgort  Lily James  Jon Hamm  Jamie Foxx  Kevin Spacey
Follow us on Twitter @The_Shiznit for more fun features, film reviews and occasional commentary on what the best type of crisps are.
We are using Patreon to cover our hosting fees. So please consider chucking a few digital pennies our way by clicking on this link. Thanks!