In a matter of months, I will be a dad. And, just like Seth Rogen and Rose Byrne's characters here - two new first-time parents putting up with a college fraternity that have moved in next door - I worry about what will become of my social life. Will I have to miss out on all the fun things I want to do in order to take care of my child? Will I just never leave the house again? Will I lose my cool, youthful edge? Luckily, Bad Neighbours has shown me a fool-proof plan: just be a really fucking terrible parent.


Because, as the fairly predictable plot unravels and S-Roges and R-Biddy get more embroiled in their revenge tactics to sabotage their new neighbours' partying ways, their baby just disappears from the agenda. What started off as the primary reason for their noise complaints, doesn't even get mentioned later on - in the film world of Bad Neighbours, their child just ceases to exist halfway through. And that's fine - the troubled parents are right to worry: they ARE more fun without a baby.

Being a Seth Rogen comedy, you'll already know what to expect here. There's daftness abound, with tons of stoner references, knob gags and even a couple of CGI-assisted slapstick moments (which would be much funnier if the trailer hadn't pre-empted them). You get the impression that most of the best moments aren't actually in the script, which was probably just the bare bones of a story anyway, written to provide a framework for improvisation and nothing more. And the bigger laughs are as much down to the way the cast deliver their lines as the lines themselves. 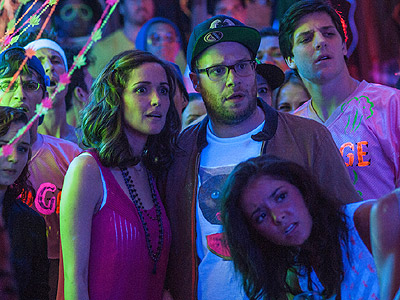 
All that matters though is the fact that there are laughs in the first place. After all, what more do you want from a film that pits two full-grown adults against a group of hunky college kids in a childish battle of one-upmanship? Between Rogen and Byrne’s attempts at appearing ‘down with the kids’, their awkward confrontations with Efron’s alpha party-organiser, and the obscenely debauched parties that occur, there’s never any shortage of chuckles, guffaws and laughing LOLs out loud. I think, at one point, I even chortled. And I don’t chortle lightly.

Also, because penis plastercasts and Christopher Mintz-Plasse on their own do not a good film make, the potential for genuine friendship between the warring neighbours lends welcome 'heart' to an otherwise immature gag-fest. Not to mention that Efron's own character growth, in which he must come to terms with one day outgrowing his all-important college reputation, is a nice mirror to the new parents' own fears about growing up too soon. 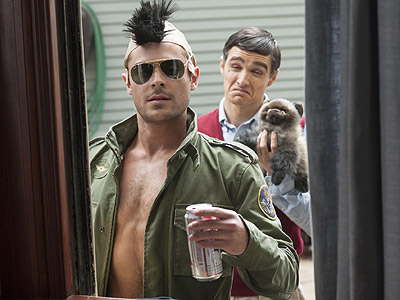 As told via the medium of bad Robert De Niro impressions.


All of which is just enough distraction to make you forget that Seth Rogen and Rose Byrne frequently leave their house to indulge in drink and drugs at their neighbours’ awesome parties and... er... presumably just leave their baby at home on its own? Ah, who cares. You can guarantee that they had a better night for it anyway, and it makes for a much funnier film than watching the pair try to sleep between feeds.

Luckily for me, as I took down notes on how to enjoy life as a neglectful, pot-smoking dad and start to wonder why it’s ever a good idea to have children in the first place, Bad Neighbours eventually provided an answer for that too. See below. If I haven’t dressed my kid up as Walter White within the first six months of its life, I just know I’m doing parenting wrong. 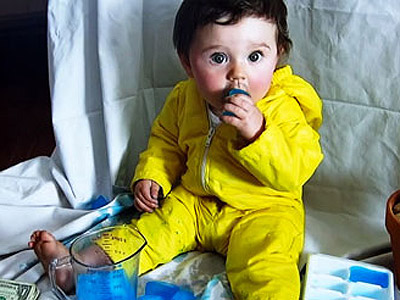 "I AM THE ONE WHO KNOCKS."
More:  Bad Neighbours  Seth Rogen  Rose Byrne  Zac Efron  Nicholas Stoller
Follow us on Twitter @The_Shiznit for more fun features, film reviews and occasional commentary on what the best type of crisps are.
We are using Patreon to cover our hosting fees. So please consider chucking a few digital pennies our way by clicking on this link. Thanks!