When a film is deliberately trying to outrage, does that make it more acceptable? Is bad taste really just a matter of taste? Is it problematic that the IMDB Parents Guide for Bad Santa 2 lists warnings for violence, alcohol/drugs/smoking, frightening/intense scenes and sex & nudity (“There are close-ups of genitalia featured, but they are contextually justified”), but says nothing about the overtones of misogyny, racism and whatever you call being rude about little people? Surely it’s this kind of selective oversight that makes this a world in which Trump can become president. (*evacuates the area from the topical bombshell he just dropped*)


It seems to me that almost all of the eagerly-awaited, belated comedy sequels released recently (I'm looking at you, Zoolander 2, Anchorman 2 and ugh, Dumb And Dumber To) have largely failed to live up to expectations because they have all tried to recapture the 'magic' of their predecessors despite many other similarly-humoured movies – often starring the same cast – already trying to do just that. Arguably, the originals were all partly popular because there had never been anything like them before, so how could a sequel ever be as good?

Bad Santa 2 manages to avoid this trap thanks to no other movie in the past 13 years trying to deliver the same kind of misanthropic, anti-crimbo comedy as the first film. One thing has changed in this time though: I am now 13 years older. So, by sheer virtue of being a 34 year old man with a mortgage and a child and a tendency to blame everything on teenagers, the hilariously offensive tone from before now just seems… offensive. 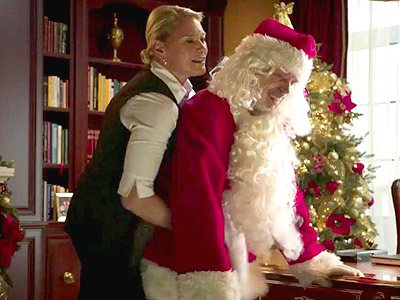 
The film is at least admirable in its efforts to match the formula and character of the first film. Billy Bob Thornton’s Willie is still a foul-mouthed drunk who pisses himself and hates everyone else. When former mini-partner-in-crime Marcus (Tony Cox) is released from prison, he convinces Willie to team up again to rob a Christmas charity, this time with the help of Willie’s equally vile mother, played by Kathy Bates.

Also in the mix are jokes at the expense of Thurman, the little boy from the first film now a mentally-challenged young adult, an over-sexed, plus-sized female security guard and Christina Hendricks, the charity boss with promiscuous urges. The one redeeming feature in the whole film is that Willie has no redeeming features whatsoever, and this idea is reinforced at every turn.

Maybe it’s my being older, or the frame of mind I was in when watching, or the fact that I am so tired of the rhetoric of intolerance that has pervaded this year, but I found it hard to find a bigoted lead character funny this time around. I know the argument for the defense: the character is supposed to say terrible things. It’s deliberate. That’s the joke. Also, it’s a comedy, so lighten the fuck up. 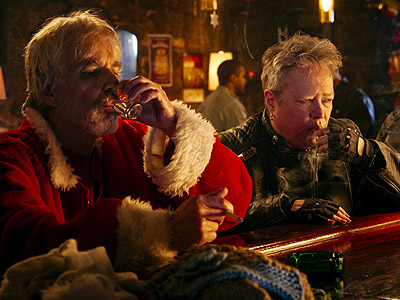 Hahaha! Alcoholism! What don't you get?


But is racism played for laughs not still the same as racism? When Willie tells his black dwarf sidekick "y’know, they used to sterilise guys like you to keep the world from becoming some negro Land Of Oz", it’s supposed to get shock laughs. But if a film is rinsing a character’s horrible nature for comedy value, isn’t that kind of also reinforcing it? Willie is, after all, the hero of the film and one who never learns any error of his ways.

I ask all of these things as a question, because there were times in this film when I did laugh. When Billy Bob Thornton’s delivery of "retard" was so caustic that it did illicit a guilty chuckle. Is that wrong? I don’t even know any more. If there was ever a clue about my inability to identify where the line of bad taste lies it’s in my Googling “what’s the correct term for a dwarf?” shortly before writing this review.

So there we are. I found the film occasionally funny and sometimes enjoyable, but mostly I found it questionable. Is that enough to forgive the film for revelling in its own obnoxiousness? Perhaps the answer lies in the fact that, while the film will probably prove divisive among the majority of cinemagoers, it will be universally loved by terrible people. And that should say just as much about a film as it does about a president-elect.

More:  Bad Santa 2  Bad Santa  Mark Waters  Billy Bob Thornton  Christina Hendricks  Kathy Bates  Tony Cox
Follow us on Twitter @The_Shiznit for more fun features, film reviews and occasional commentary on what the best type of crisps are.
We are using Patreon to cover our hosting fees. So please consider chucking a few digital pennies our way by clicking on this link. Thanks!