If you're going to call your movie Bad Teacher and openly invite comparisons to Bad Santa, you'd better make sure your Teacher actually is Bad, and not just... y'know, a bit shit.


Stopping short of child molestation, I want a Bad Teacher who pushes the boundaries of what's decent in a civilised society, not just a stuck-up bitch who'd give an Ofsted inspector a headache. Most importantly, I'd expect this Bad Teacher to be funny. Is that too much to ask? Apparently so, even though I was surrounded by several audience members who honked like spastic geese throughout.

I expected the substitution of swearing and crudity for actual jokes, but what I didn't expect was for Bad Teacher to actually be less offensive than its own red-band trailer. Evidently, whoever cut it decided to use as many F-bombs as possible - none of which appear in the movie. Normally I'd do a mocking little 'cry me a river' face at someone who complains when bits from a trailer aren't in a film, but in this case, it feels particularly shifty – they lured me in with profanity then totally pussied out. Sorry, wussied out.

Tonally, Bad Teacher is a total mess. Writing a protagonist with almost no redeemable qualities isn't easy, and Cameron Diaz's irresponsible teacher Elizabeth Halsey has no character arc whatsoever. Throughout the whole movie, she's portrayed as lazy, under-qualified and selfish, yet there's absolutely nothing about her that's likeable to get you on her side. You got behind Billy Bob in Bad Santa because he'd hit rock bottom; Elizabeth Halsey is just a boring, stuck-up cunt. 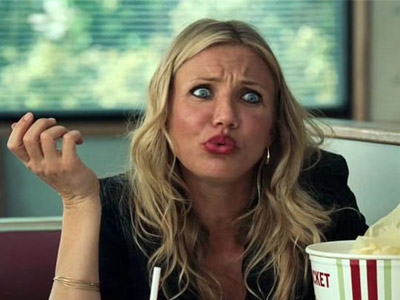 
It's a shame, because Diaz isn't bad per se, her character is just horribly written. A love interest? Really? Didn't we already establish that she's a horrible, man-eating gold-digger? How much of my heart should I invest in this relationship? I'M GOING ALL IN.

It's all rather unfortunate, because she's surrounded by far funnier characters. Lucy Punch is brilliant as the goody-goody teacher across the hall, Miss Squirrel. Punch has got this bizarre, mad-happy face that looks like it could suddenly turn vampire at any minute, which is great because she wears this horrendous pained smile throughout, like she's just waiting to explode with rage. (IMDB says her new movie is called Strippers Vs Werewolves, which sounds interesting). 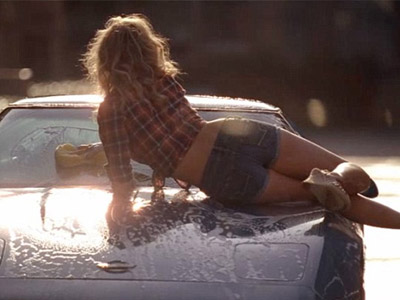 A promotional still, selected at random.


Even Timberlake, who has developed a nasty habit of accidentally being ace in films, gets more laughs, even though he has a scene where he comes in his pants (LOL you can see the stain and everything LOL). He has a great scene where he discusses both his love and hate of slavery and sharks, which you'll probably have to see for yourself to understand. Naturally though, every part except for Diaz's is underwritten and short-changed come the movie's end.

Crass, charmless and not especially funny, Bad Teacher is like a school kid trying to be cool – it's a comedy that knows that it wants to shock and be outrageous, but thinks that farts, boners and hot girls occasionally saying 'fuck' is as edgy as it gets.

More:  Bad Teacher  Cameron Diaz  Justin Timberlake  Jason Segel  Lucy Punch
Follow us on Twitter @The_Shiznit for more fun features, film reviews and occasional commentary on what the best type of crisps are.
We are using Patreon to cover our hosting fees. So please consider chucking a few digital pennies our way by clicking on this link. Thanks!