"The kind of typically Jewish story that I wouldn't bother reading," said one critic when leaving the screening. I happen to disagree. Yes, Barney's Version is pretty heavy on the Jew thing - there are plenty of mazel tovs, kippahs and Jewfros - and yes, it is based on a book probably few of us knew existed. But don't let one critic's comment put you off, listen to mine instead. This is a clever, sharply-written, well-acted comedy drama with Paul Giamatti at his absolute career best. Pfft, what do critics know anyway?

Barney Panofsky (Paul Giamatti) is a chain-smoking, scotch-drinking, ill-tempered Canadian TV producer who is reminiscing on the successes and (many) failures of his rather colourful life. He lives a carefree, Bohemian lifestyle in Rome in his thirties, has two disastrous marriages, and has finally met his true love...at his second wedding. Meanwhile, he's suffering the inconveniences of being a murder suspect. Forrest Gump this ain't. 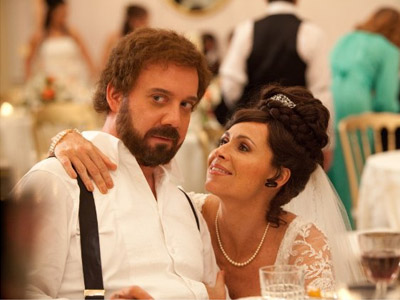 The severed hand on Giamatti's shoulder was really starting to freak him out.


Barney's Version is the type of light-hearted comedic drama typically released without much fanfare in January but becomes a dark horse come awards season - hence why I held off on writing this review until the Oscars nominations had been announced. Turns out I needn't have bothered - that solitary, yet well-deserved Golden Globe for Giamatti will have to suffice. Still, it's better than nothing, huh Paul? It's more than Joaquin got.

While we're on Oscar exclusions, Dustin Hoffman is on hand as Barney's embarrassingly crass father, Izzy. With a hint of Bernie Focker about him, he gives a memorable, wise-cracking performance as Barney's ever-dependable companion. In fact, Giamatti's supporting cast is so good that it's saying something that he still manages to come up trumps.

Minnie Driver and Rosamund Pike are superb as Barney's second and third wives respectively (It's been nine years, but I think we can finally forgive Pike for Die Another Day). A moustachioed Mark Addy crops up in a pointless role as the cop trying to nail Barney for murder, but I'll go ahead and assume he got the part with his Clubcard points. 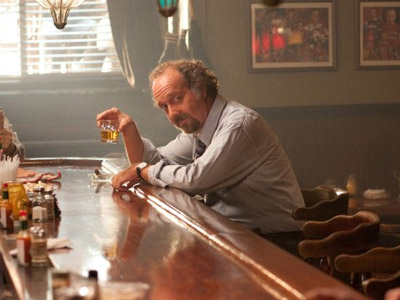 "Here's to this movie's wig department."


Despite some questionable plot strands (Addy's character's murder revelations make for pretty lousy bookends), this is still a terrific piece of filmmaking that handles a dramatic change in tone with ease, jumping from comedy to teary tragedy effortlessly. To reiterate my fellow critic's words from earlier, you may not bother with the book but it won't hurt to see the film - if only to see what Oscar has missed out on.

More:  Barneys Version  Paul Giamatti  Dustin Hoffman
Follow us on Twitter @The_Shiznit for more fun features, film reviews and occasional commentary on what the best type of crisps are.
We are using Patreon to cover our hosting fees. So please consider chucking a few digital pennies our way by clicking on this link. Thanks!