A quintessentially American summer camp gets invaded by three rowdy Brits. Cue embarrassment, sexual antics, several 'oh my gaaawd's and a boat-load of those life-defining moments. The title says it all really.

Following on from the unprecedented successes of recent British teen shows, including the likes of The Inbetweeners and Skins, Beaver Falls has landed on E4 to take a punt at winning over the British masses.

Scottish charmer Flynn, goofy virgin Barry and recently dumped A-Rab are sick of the drib and drab nature of England and decide to try their luck on the other side of the pond as Camp Advisors in the sunny plains of California. Upon arrival at the aptly named Beaver Falls, the lads are quickly shoved to the bottom of the pile and forced to take charge of Cabin 17 - namely a bunch of overweight and unpopular teenage boys. Desperate to have the summer to end all summers and escape the woes of their lives back home, the boys are ready to let loose and have fun.

Unfortunately Flynn, Barry and A-Rab's plans for excitement are quickly quashed by overbearing head camp honcho, Bobby, whose flair for being insanely and classically American is outstanding. Not only this, but the kids in Cabin 17 are relentlessly bullied and made fun of - meaning the Brits are constantly having to fire-fight in order to help them and also gain respect from anyone within camp. 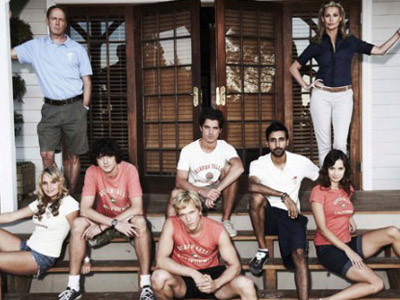 It's become apparent so far that each episode typically sticks to a recurring storyline, incorporating the following trends throughout:

That being said, a characteristic stoic British attitude, wit and sarky sense of humour is omnipresent and makes for a good distraction from the predictability of each episode. Psycho exes, sordid affairs, love triangles and campers being buried shoulder-deep in sand are just a few of the random tidbits that help to freshen up each instalment.

The show doesn't simply rely on its humour either; there are serious undertones to the boys' reasons for taking a break from the homeland. We're quick to discover that Flynn is actually running away from a life-threatening disease and A-Rab wasn't just dumped - his heart was utterly trampled on. But, I hasten to add, there's little major focus on these points and I do wonder, especially with Flynn's illness, whether it was worth including them as part of the plot at all. 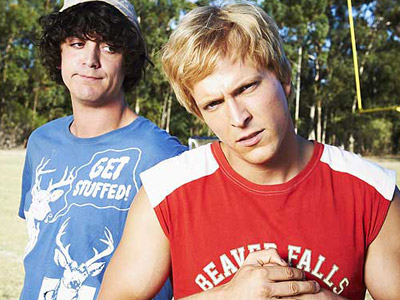 The other quibble I have is whether the show is really an accurate portrayal of the US and their 'summer camps', or whether it's just conveying our usual perceptions as outsiders? In the same vein, the show also taps into the stereotypical views that we believe Americans to have of the British/Scottish. Similarly, it's impossible to tell how accurate these are.

Initially I didn't think the show had much promise, but I've stuck with it and it has gradually improved. Granted, Beaver Falls doesn't boast a whole lot of originality and it lacks the same spark that made shows like The Inbetweeners truly great, but the jokes are plentiful and the humour light-hearted; there are much worse things I could be watching on a Wednesday night. However, I do wonder what the longevity is for a show like this and whether or not we'll be seeing a second season. After all, summer only lasts for six weeks a year...

Catch the season finale next Wednesday on E4 at 9pm. I can guarantee that it'll be reasonably watchable.

More:  Beaver Falls  E4
Follow us on Twitter @The_Shiznit for more fun features, film reviews and occasional commentary on what the best type of crisps are.
We are using Patreon to cover our hosting fees. So please consider chucking a few digital pennies our way by clicking on this link. Thanks!