As I settle to write this, news of Javier Bardem's Oscar nomination has just broken. So the anticipated paragraph about what a complete tool the Academy is will not feature in this review after all. Congratulations to Javier and his massive face, he might just have made Colin Firth a little bit nervous.


Bardem plays Uxbal, a single father living in Barcelona. He scrapes a living together from playing his part in a chain of underworld criminality. We're not talking Del Boy tomfoolery here, but a modern day slave trade; a hidden workforce fuelling the fire of Barcelona's tourism industry and ensuring global capitalism's churning shit machine keeps on producing stuff for chumps like us to buy.

Uxbal is by no means at the bottom of this monstrous chain, but he is still blighted by poverty. He is essentially a good man who does what he does out of desperation, not greed. He barely has time to consider his own guilt, but in his subtle way, Bardem lets us know it is there. Uxbal's children are the centre of his world and his devotion to them is the driving force behind his every move. He is also in touch with death constantly - he has the ability to communicate with the dead. Though he makes a little money from his "gift", it is his way of helping grieving families. 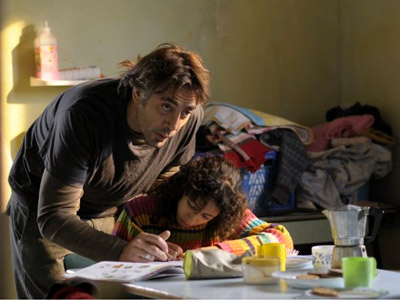 'That is a totally brilliant kettle,' thought Javier


In the midst of the chaos of his life, Uxbal discovers he is dying. He may have dodged the taxman, but there's no getting away from life's other certainty. He knows death, he looks it squarely in the eye every day. His fear arises not from the prospect of dying, but from what he is leaving behind. In the time he has left, he desperately tries to provide for his children and attempts to make amends with the children's unstable, bipolar mother (a shattering performance from Maricel Ńlvarez), hoping she can overcome her demons to take care of them.

He savours precious moments with his family, appreciating glimmers of beauty amid the grime and anxiety. Uxbal seeks redemption, he tries to do the right thing, but in one particularly gut-wrenching scene he is shown that the way he lives his life can have a catastrophic impact on others.

Biutiful is a back to basics movie for director Alejandro GonzŠlez IŮŠrritu. It doesn't have a star-heavy ensemble cast with a complex multi-stranded narrative, like Babel and 21 Grams. IŮŠrritu's debut, the superb Amores Perros, lacked Hollywood faces but also had several interwoven plot strands, so IŮŠrritu has really gone as far as he can with this device. 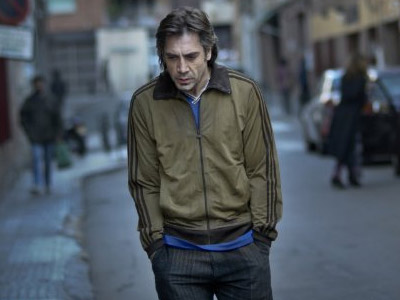 Javier Bardem walks home after a screening of Hereafter


Biutiful simply follows one man's story, albeit a complicated, tortured man, though IŮŠrritu's pet theme of globalisation and the winners and losers it creates is alive and well in this movie. Biutiful has most in common with Amores Perros (not least because it is in Spanish), because of the way it captures the seething mess of a city, showing you the bits Rough Guides never could.

Bardem's performance elevates this film from being two and a half hours of unremitting gloom to something quite otherworldly. The disintegration of Uxbal's body is made painfully vivid by Bardem, but so too is the serenity of a man who believes in redemption. The film itself is occasionally in danger of becoming an Idiot's Guide to Spiritualism, but he makes it palatable.

Biutiful is not one of the best films of the last twelve months, but Bardem's performance is one of the finest you will ever see.

More:  Biutiful  Javier Bardem  Alejandro Gonzlez Irritu
Follow us on Twitter @The_Shiznit for more fun features, film reviews and occasional commentary on what the best type of crisps are.
We are using Patreon to cover our hosting fees. So please consider chucking a few digital pennies our way by clicking on this link. Thanks!