There are a couple of premises on which Black Mass relies in lieu of a unique selling point. One is the idea, mainly established by marketing over the years, that a radical physical transformation for a role equals a daring and probably great performance. The other is that the audience's familiarity with the structure of the real-life gangster movie is enough to justify doing it all over again. Both are fallacies, and neither is enough to make it sparkle.


It has always seemed to me, being a man and an idiot, although less of an idiot than the guy I lived with at university who covered his walls in Scarface posters, that a gangster drama that's a big enough deal to get a cinematic release is one of your most reliable bankers. There are middling ones, sure, but they're rarely a waste of your time. 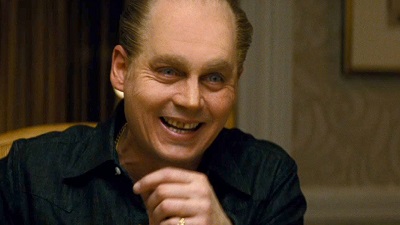 
Black Mass continues this streak. It's one of those that never bores you, that you broadly enjoy, but then you spend 20 minutes unpicking afterwards with a friend and you realise just how much was wrong with it. This is mainly because it is uninterested in trying anything different, to the extent that it directly lifts a couple of things from other classics of the genre. And this grates especially because it's one of the rare true-life stories of American organised crime that has some unusual details that could elevate it.

It has the shot from directly above of the Sedan driving off perpendicular to the frame, the recently-deadened body next to it, followed by the helicopter shot of The City. It has the man shooting the man lying prone on the floor, scowling as he squeezes the trigger, seen from the victim's perspective. It has – egregiously – its own version of the "what do you mean, I'm funny?" scene from Goodfellas. It has the main guy being lovely to his mum and old ladies, like – well, all of them really.

The unusual details are there, but not explored overly. James 'Whitey' Bulger, who was Boston's main face-shooter and money-in-brown-paper-bag-collector in the sixties and seventies, became an FBI informant in 1975. As Johnny Depp plays him, caked in make-up, hair thinned, weird contact lenses, this is a decision about which he was conflicted but went through with in order to bring down a rival gang. This conflict should inform the whole thing, rather than just melt into the background in favour of lots of scenes showcasing how enigmatic Depp is. His brother (Benedict Cumberbatch, having a good old stab at the accent but sounding like he's doing Good Will Hunting in the Harrow school play) was a Massachusetts State Senator. This should be a fascinating source of turmoil for him, but it's left entirely unexplored. 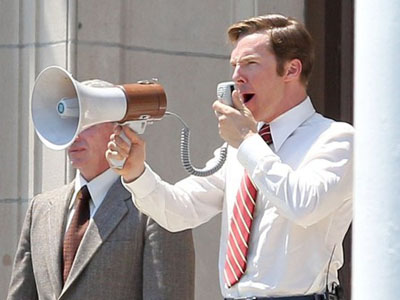 "May I have yah attention please? Is they-ah a dialect coach in the house?"


Its real problem is that it doesn't know who or what its anchor is. It invites us to consider a few, like Jesse Plemons's gang member Kevin Weeks, the first person we see, in an FBI interview room years after the action. When we segue into the main story with his testimony the narration, we think, Right: this is the framing device, and this is our guy who's going to lead us through the whole thing. But director Scott Cooper gives up on this quickly, throwing in a few more part-time narrators every now and then, never sticking with one.

Or it could be John Connolly (Joel Edgerton), the G-man from the neighbourhood who grew up with the Bulgers. He brokers the deal with Whitey but gets too close, and ends up in too deep, Donnie Brasco-style. Maybe he's our guy: he seems decent but flawed, but no, we don't spend enough time with him to give us much to cling on to. It certainly isn't Whitey. He's the party piece, but not our eyes and ears.

No, in the end, we just sort of meander through the story, with little of the traditional rise-and-fall arc, and end up where we end up: with the obligatory superimposed information as to what prison sentences everyone received before the credits. As I said, none of this ever dips below the line into 'bad'; everyone turns in a solid performance. Depp is very good, but all the 'career best' hype you've seen is just poster-quote grabs informed by the lazy supposition that a handsome male star making himself look unrecognisably ugly through make-up is turning in the performance of his life. It's a fun-enough two hours, but not much beyond a straight-up story that never swings for the Fenway Park fences.