Black Mirror: Be Right Back

You read a million articles a week about the creeping ubiquity of technology. Most of them adopt a negative tone from the get-go: statistics showing the high numbers of online interactions we make are offered as evidence that they're replacing our real-life ones, without the idea that they might in fact be supplementing or even enriching them ever raised. This simple scaremongering fear of the unknown is absent in Black Mirror. It's written by people who embrace technology, and use this knowledge to imagine its dark potential. And it is at times quite brilliant.


The change in Charlie Brooker's writing, both in his Guardian columns and on TV, is noticeable since he became a father. This first episode of Black Mirror's second season is distinct from previous scripts such as Dead Set, imagining personal loss rather than large-scale devastation.

Still there are trademark ideas here. The overarching theme of Black Mirror is the personal hells we could be heading towards as we gradually automate more and more parts of our lives. So in 2011's The Entire History of You, recently bought for movie-mongering by Robert Downey Jr, our memories are Sky Plussed for us to replay on demand. Here in Be Right Back, a beta piece of software can aggregate a person's online footprint - Tweets, status updates, voice recordings, videos - and use them to approximate a facsimile of that person after their death, mimicking how they might respond to a given question from those who survive them. 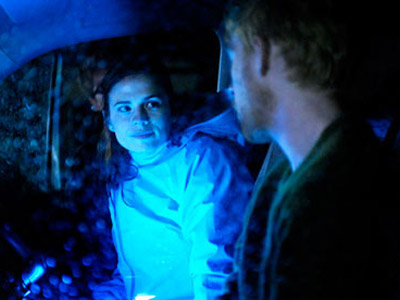 In the future, EVERYONE WILL BE BLUE. (*begins second draft*)

This begins as comfort for Martha (Hayley Atwell) after her boyfriend Ash (Domhnall Gleeson) is killed: he was a heavy social media user so there's a lot of available data. As IM chat with the ghost in the machine progresses to phone conversation and then to the software's logical, dumbly horrible extent, her reliance on it becomes creepingly clear. It's gone beyond succour, and it's preventing her from accepting Ash's death and moving on.

Atwell's knife-edge performance holds it together, never teetering into hysterics, and Gleeson's dumb compliance as the digitally assembled version of Ash is almost painful to watch. But it's the writing and the concept you admire the most: there's a wonderful idea in the script that illustrates how we only put online the most flattering pictures of ourselves, for example. These little moments of clarity are what make Black Mirror's little dystopian worlds so rich and unsettling.

Brooker's written the whole season himself this time. The popular wisdom seems to be that fatherhood has softened him, but if this is anything to go by, I think it's more just broadened his worldview.

More:  Black Mirror  Charlie Brooker  Domhnall Gleeson  Hayley Atwell  Channel 4
Follow us on Twitter @The_Shiznit for more fun features, film reviews and occasional commentary on what the best type of crisps are.
We are using Patreon to cover our hosting fees. So please consider chucking a few digital pennies our way by clicking on this link. Thanks!