This is a genuine question: do you find the Red Bull cinema adverts funny? When they come on before a film, do you raise a wry smile, chuckle and say, "Good one, Red Bull!"? If you're the type of person who laughs out loud in an otherwise silent cinema at those types of adverts, you will like Blended. However, I suspect you are an awful human being.


I like to think I'm a nice person, but I find I have to sit in incredulous silence whenever someone guffaws at the painfully unfunny, Purple Ronnie-style animation of the Red Bull ads, and a similar thing happened to me when anyone laughed out loud during Blended. I wondered if there was something I just wasn't getting: was the humour in Ivan Menchell and Clare Sera's script so profound and subtle it just went right over my head? Was Julio Macat's lush cinematography too majestic for me to comprehend? I saw other people enjoying Adam Sandler romance of Drew Barrymore on the African plains: I heard them laugh. (I also heard them repeat lines directly from the screen and highlight plot points out loud, but that's by the by. In short, other people are terrible). But on a personal level? It just didn't hit home. Am I dead inside, I pondered? Or are there just are two types of people in this world: energy-drink-guzzling Adam Sandler fans, and cold, hollow, devoid-of-all-feeling-apart-from-anger people like me? So many questions.

It's hard to watch any Sandler film after The Wedding Singer (also directed by Frank Coraci) without thinking it's an overlong trailer for one of those fake films-within-a-film parodied in Funny People. The words "Adam Sandler is going to Africa!" should instill a sharp sense of icy fear in anyone who had the misfortune to even catch just a glimpse of Jack & Jill. The fact remains though that his films still turn a profit and find an audience, and for one reason or another I find myself watching them and another little piece of my soul breaks off and withers away because I don't think I'll ever truly understand why other people like them.

To summarise in as few words possible: it is a film, it has people in it, the lighting is adequate and there's a monkey band playing Careless Whisper. Can I go home now and stare into the dark abyss that is my life please? 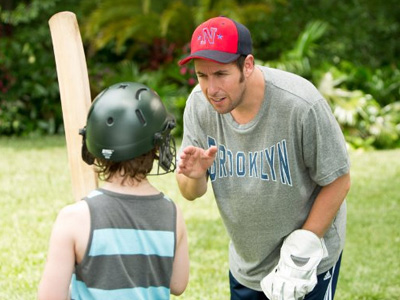 Blended doesn't really believe in straying too far from conventional norms and is all the more annoying for it. Even Joel McHale, who I actually love, pops up to do his stock douchebag routine as the ex-husband of Lauren who is (surprise!) too busy to spend time with his kids, presumably because Rob Schneider was too busy. When the action relocates to Africa (and by "Africa" I mean "Movie Africa" which is apparently one big homogenous country) the rest of the film diligently ticks items off the 'African Cliches' checklist: Humping rhinos? Check? Abundant racial stereotypes? Check. The only thing it's lacking is a monkey butler and – no, wait, it has that too. I stand corrected, Blended has it all. I don't know what my problem is.

Blended's main problem is the same of any film based on such a flimsy concept (Lauren and Jim hate each other but like each other's kids; the five star resort doesn't bother with identity checks), being that you know exactly how it will all play out. You can see the jokes coming at you a mile off, like a raging elephant trampling across the Serengeti. Apart from the pretty likeable kids who obviously had a blast filming abroad, every one else pretty much phones it in. Sandler may as well not be there – he doesn't do his weird shouty thing, but then he's not quite convincing as a romantic lead either. Barrymore just shouts her lines at whoever seems to be standing in the way.

Terry Crews could have been a fairly fun scene-stealer as an over the top compère who always pops up at the worst time possible, but all his showboating is slightly offset by an embarrassed-looking African choir who always accompany him. He also manages to steal the best pun I could think of by rhyming "Blended" with "Splendid", which I was going to try and shoehorn into this review. 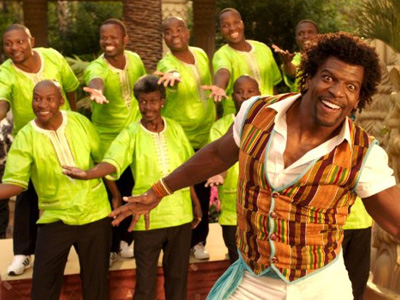 
And yet…I didn't out and out hate it. At its best Blended is tolerable: there's no underlying sweetness to find at its heart because it's so obviously clear what it's trying to be, tossing out one cornball moment after another but leaving them to shrivel up to die in the African sun. Director Frank Coraci manages to coax out a few laughs – the aforementioned monkey butler band and Sandler's daughters' unfortunate haircuts – but unless you're a true fan, there's not a lot to bother with. There are a couple of nice throwbacks to the previous Sandler and Barrymore films, but I probably missed the majority of these gags because I was too distracted by the fact that pre-makeover Bella Thorne looks like a young Owen Wilson and also I was obviously caught in the grip of an existential crisis.

More:  Blended  Frank Coraci  Adam Sandler  Drew Barrymore  Terry Crews  Adam Sandlers Friends
Follow us on Twitter @The_Shiznit for more fun features, film reviews and occasional commentary on what the best type of crisps are.
We are using Patreon to cover our hosting fees. So please consider chucking a few digital pennies our way by clicking on this link. Thanks!