Approaching the end of Richard Linklater's 166-minute Boyhood, I realised that some of the early scenes were now something of a faded memory to me, and that I couldn't fully remember what the younger Mason had looked like. This reminded me of some experience or other, which I later realised was that of watching my own family age. And that's because Boyhood is as close as cinema gets to real life.


I once had the same idea as Richard Linklater. Yes, it occurred to me ages ago that it would be brilliant to make a film in which you used the same actors in scenes shot years apart. I never got around to actually writing, casting or shooting it, or even really finishing the thought, or wiping up the jam that dripped onto my shirt while I was thinking it, but I'm basically as good as he is.

Still, as a friend of mine often replies when someone looks at the achievements of others and says they could easily do the same themselves: "Yeah, but you didn't." Linklater did. He spent 12 years making a film, shooting a few short scenes a year with the same actors, and the result is genuinely unique.

The trailer gives the impression of a film filled with life lessons and turning points for Mason (Ellar Coltrane) but, while it has a few, as you'd expect between the ages of six and 18, this isn't the point. Don't go looking for narrative, or arcs, or conflict and resolution, or characters learning great truths. Just go looking for life itself, and you'll find it. It's right there in front of you, for almost three hours, and it's remarkable. 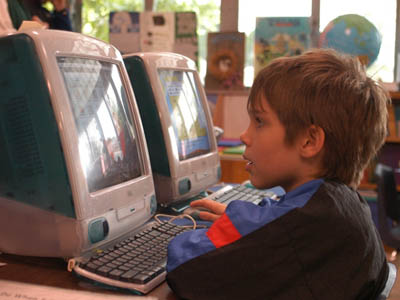 This kid has just discovered a newly-launched website called The Shiznit. Stick with it, son: it starts to pick up around 2009.


There is no real cultural equivalent to this, the 'Up' documentary series aside. In many ways reality TV, whose purest form should involve observance of real life, would've prepared us better for the concept if it hadn't years ago abandoned any idea of social experiment in favour of pre-prepared scripts, exploitation and tabloid headline grabs. But as it is, you watch the first hour or so of Boyhood and find yourself unable to compute it.

As we meet Mason at six, a normal kid with a sister (director's daughter Lorelei Linklater) and a single mother (Patricia Arquette), we're pre-programmed as movie-goers to expect a conflict soon to shake things up and kickstart his journey. When errant father Ethan Hawke arrives, it looks like we've found it. All the signs are there: he upends things, disrupting the family equilibrium by taking the kids bowling and seeming a bit irresponsible and too keen on being popular with them. He's going to leave again and Mason's daddy issues will be his driving force, right?

Nope. Dad isn't without his flaws, and he does flit in and out for a few years, but he becomes a steady influence overall and a decent enough father. To the extent that you notice this happening at all, given that by its nature nothing happens overnight here, you realise that this isn't a Hollywood narrative, or even a story in the traditional sense. Hawke's character is changing, but no hay is made of it; there's no huge moment of realisation that makes him see the error of his ways. He just slowly grows up, as anyone would over 12 years. 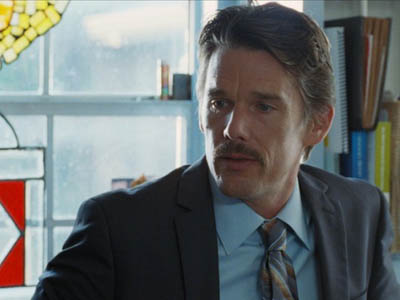 Trouble with being documented once annually for 12 years: every ill-advised facial hair decision you make is immortalised.


What makes this fascinating is that the form constantly wrong-foots you, chipping gradually away at your preconceptions of film narrative convention. There's a scene, when Mason is around ten, in which Hawke says to his daughter: "I know more about you through your Facebook page than I do through talking to you!" Instinctively I thought to myself: that doesn't quite ring true. Parents weren't on Facebook back then; it had barely got going. The sort of thing I might note down as a bit of a misstep in the storytelling. Then I realised that the scene would've been shot in around 2008, and whatever the characters' experiences of Facebook were then were entirely consistent with the time. My criticism couldn't possibly hold true: the characters and actors had no idea what Facebook would become, because it hadn't happened yet.

There's a key question, which I'm not sure I can adequately answer: why is this enjoyable to watch? There's not much of a story going on, after all. I'll have a stab, though, by asking you to consider a comparison with Christopher Nolan's Memento. Now, Memento is great, but if you rearranged its events into chronological order, you'd probably find the story you were left with pretty unremarkable; pedestrian even. It succeeds because its structure is innovative and engaging.

In the same way, Boyhood's form is more important than its content. It requires you to suppress the movie-watching part of your brain, accept that what you're watching is supposed to be experienced on different terms, and go with it. It takes a while but, once you're in, you realise it's unique. What you're watching is as close to real life as narrative cinema gets.

More:  Boyhood  Richard Linklater  Ellar Coltrane  Patricia Arquette  Ethan Hawke  Elijah Smith  Lorelei Linklater  Marco Perella
Follow us on Twitter @The_Shiznit for more fun features, film reviews and occasional commentary on what the best type of crisps are.
We are using Patreon to cover our hosting fees. So please consider chucking a few digital pennies our way by clicking on this link. Thanks!