With only eight episodes to go, I have no idea whatsoever how Breaking Bad's going to finish this year, and even less how I'm going to fill the empty shell of a life it'll leave behind for me. Maybe I'll try and recreate key scenes in the shed.

My brain having the capacity only to recall pieces of useless pop-cultural ephemera, I was reminded of these interviews while watching the first eight episodes of Breaking Bad's fifth season. For while they contain few Disclosure-aping scenes in which Jesse gently grazes his scrotum against Walt's beard, the role reversal between the two since the story began is quite apparent. 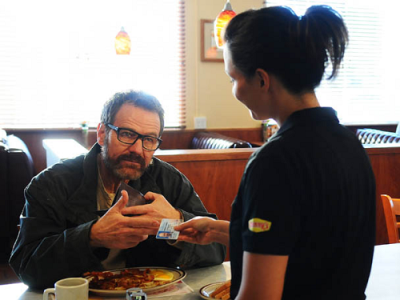 Was anyone else really bugged by the fact that he left without eating his breakfast?


Remember? Remember how Walt was the timid one with the moral code, crime his necessary evil to provide for his family? How Jesse was the street-savvy one, the risk-taker? Out of the window, all of it. Now while Jesse is plagued by guilt over the things they've done, his partner is a ruthless egomaniac, and on the verge of making the final choice that makes his transformation complete: his drug empire over his family.

The switch isn't just a moral one either: backed into corners, it's Jesse who's coming up with the ingenious backs-against-the-wall ideas now, his mind no longer clouded by meth. And what surprises you most is how much pleasure you take in this: Jesse always had potential to be more than a drug-addled waster, and it's ironic that it took his high-school chemistry teacher to drag it out of him, only not at school. And doubly ironic that it's in striving not to do what the teacher wants him to that might finally save him. Maybe the two ironies cancel each other out, I don't know. Breaking Bad left my deductions and any semblance of easy narrative ideas for dust at least two seasons ago. 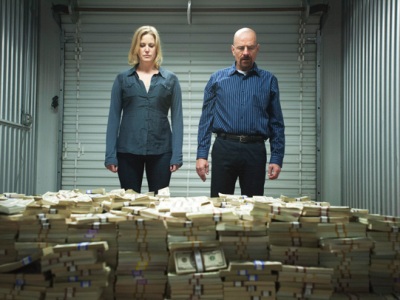 "Finally, what I've been working for all year: enough money to recreate the Brewster's Millions DVD cover."


You're reminded in these episodes that it's only been a year since Walt's cancer diagnosis, which makes all the more stark the changes he's undergone. There's a key point often discussed about how much shows like Breaking Bad or Dexter encourage you to root for antiheroes, and push against the traditional idea of sympathy for the lead character. Whether Walt has gone from good guy to bad is moot: the distinction isn't obvious. I stopped to think at one point whether I was still rooting for him, and realised I didn't have a clue. Moreover, I wasn't sure if I ever had.

Because, as The Sopranos did before, what Breaking Bad does is not so much challenge our moral reactions or even muddy them; more just make them utterly irrelevant. Nothing is clear; nothing is straightforward, other than the surety that, whether deserved or not, everyone's actions have consequences. Me, I spent the nineties watching cheapjack Michael Douglas films, and now this is my life.

More:  Breaking Bad  Bryan Cranston  Aaron Paul  AMC  Netflix
Follow us on Twitter @The_Shiznit for more fun features, film reviews and occasional commentary on what the best type of crisps are.
We are using Patreon to cover our hosting fees. So please consider chucking a few digital pennies our way by clicking on this link. Thanks!