"Men are like buses," says the Bridget Jones's Baby advert on the side of the ones currently making their way through school run-gridlock, possibly because we're awful and stained with last night's food and can't be relied on to turn up. Bridget's choices were often bad over the first two films, but the scripts usually ignored the fact that her men were worse. Three films in, the franchise seems to have caught up and started rewarding her.


I am very much on the side of Bridget Jones's Baby. It seemed to me before seeing it that it had the potential to be calamitous, post-feminism's fourth wave, if it showed her still gaffe-prone and defined by the absence of a relationship. Female characters like noughties Bridget won't wash anymore, especially ones so iconic: a recent rewatch of the first and second films left me feeling that her depiction was the sort that would be challenged were they released today.

Enter Emma Thompson, whose fingerprints are all over the script. It's not a total overhaul of the character, losing its comic opportunities, but affords Bridget more respect. She is good at her job now: a capable TV news producer, and interested in dating without desperately looking to fill a void. Where she makes mistakes they're understandable ones which are funny because of their consequences, not because they're the product of her chaotic nature.

This is partly facilitated by the absence of Hugh Grant, who didn't fancy reprising his character. Without Daniel Cleaver as the source of I-know-I-shouldn't-but temptation we get Patrick Dempsey's Jack, who is sexy and nice as opposed to sexy and an absolute bell-end, a refreshing script choice where it would've been easy just to do a find-and-replace on Cleaver's name and get Clive Owen on the phone. 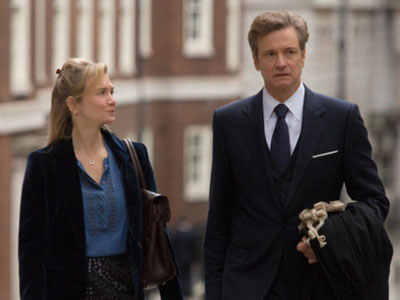 "I love you."
"Unfortunately I cannot reciprocate as I am stoical and emotionless."


Bridget's choices have always been between men who didn't appreciate her, and I still find Mark Darcy's "Oh, Bridget!" look of amused affection when she's making a public arse of herself tough to stomach. Theirs was always an unequal relationship, based around his tolerating her and never reassuring her she didn't have to change to suit him. Now the balance is tipped: he's divorcing his wife and drawn back to Bridget, just as she has another good choice in Jack and a baby on the way, of whom either man could be the father.

It rivals the first film for jokes (and beats the shit out of the second): Thompson's obstetrician gets a lot of the best lines, including a brilliant one she's recycled and thrown into the script to great effect after Robbie Williams said it to her on the Graham Norton Show. There's another I loved because it addresses the idiocy of one of my personal bugbear tropes: throwing an expensive mobile phone out of the window because it's ringing at an inconvenient time. Bits fall flat, like the newsroom being taken over by one-note hipsters eager to drive social media traffic, leading to an unconvincing grandstand speech by Bridget about news values. But they're always rescued straight away by something funny or touching, like the scenes between her and her dad (Jim Broadbent), which have always been shot through with the sense that he's the only one who absolutely gets her.

Zellweger inhabits the role totally as she always did (the fact she worked incognito as a publishing intern to research the first film and maintained the accent on set at all times would've been celebrated as intense Method commitment were she a man), especially impressive when returning to it after so long. Moreover, everyone pulls their damn weight. You realise as we head into the final delivery-room straight with a splendidly awkward sight gag around a revolving door that no one's been short-changed, when the potential for a mailed-in retread was so high: here's a laugh, plus the sense that the character's truly grown along with her audience.