Bullet To The Head

The best thing about Bullet To The Head is that it is only 91 minutes long. I've watched so many three-hour, awards-worthy epics this month, I was expecting the final fight between Sylvester Stallone and villain Jason Momoa to be the catalyst that actually gets the story started. Brevity is hardly a big selling point, but know this: Bullet To The Head is short, sharp and to the point, if the point is Sly Stallone punching, kicking and stabbing people quite violently.


Stallone plays New Orleans hitman Jimmy Bobo, which is obviously hilarious. Fellow gangsters talk in hushed tones about the fearsome "Bobo", like they're attending Coulrophobics Anonymous. Jimmy, as we'll call him to spare further mirth, is your average big city assassin ("I take out the trash" he narrates, helpfully) who is just minding his own business killing people for money when his partner is savagely killed by a 7-foot mob goon by the equally fearsome name of 'Keegan' (Jason Momoa). Vowing revenge, Jimmy teams up with a scrappy Washington cop (Sang Kung) to track down those responsible via a hilarious culture clash buddy cop routine a la Rush Hour. Ambition, you might have guessed, is not one of this movie's strong suits.

Plot schmot. All you care about are the violent bits, you big bear, you. Luckily, they're as grisly as you might hope, given that Bullet To The Head was adapted from a French graphic novel; this means geysers of blood, thumping fist fights and faces getting trodden on. Veteran director Walter Hill (The Warriors, 48 Hrs) has a good handle on the bust-ups, refusing to edit them to within an inch of their lives like these goddamn new kids on the block. There's the occasional odd decision, like huge bastard Momoa getting floored by one of those little yellow mop bucket things you get in restaurant toilets, but otherwise they're hugely satisfying. Compared to Taken 2's toothless fight scenes, the brutal, half-naked scrap in the bathhouse – complete with Stallone in his pants – is positively masterly. 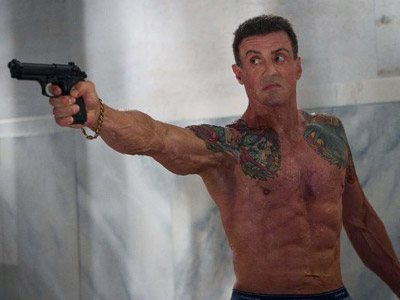 
A generic plot isn't necessarily a problem if your script has character and your cast has charisma, but that's not really the case with Bullet To The Head. Sure, Stallone is still a great screen presence, reading his lines in that iconic slur that sounds like he's trying to finish before his Ambien kicks in, but the supporting cast are average rent-a-perps. Jason Momoa rocks a good Blue Steel but isn't much of a villain, and Christian Slater can't stop being Christian Slater long enough to be a proper slimeball. Sung Kang isn't really much of a foil either, and the hilarious banter promised in the trailers ("You're old!" "You're Asian!") doesn't really materialise. I'm giving the ball-busting a C-minus. Must try harder.

Though the scripted horseplay doesn't provide much in the way of LOLs, there's plenty of unintentional comedy to keep you interested. One scene requires Stallone to enter a party undercover, which he does via a 6" masquerade mask, expertly shielding his gigantic frame from discovery. The dialogue is pretty woeful ("You had me at 'Fuck you'!") but Stallone delivers it with an air of indifference that, luckily, happens to work for his character too. There are a number of sloppy mistakes that keep jarring you out of the movie, like was his partner called 'Lewis' or 'Louis'? Hard S or not? You've spent the whole movie trying to avenge the guy, the least you could do is learn his name.

While I'm nitpicking, I'm calling for the death of the gangster movie trope whereby a lowly crook instantly assumes the rank of the guy above him on the criminal ladder by shooting him dead. Surely there's more to it than that? The mafia would be pandemonium if it was that easy. Whenever it happens, like it does in Bullet To The Head, all I think is, okay fine, he's dead and everything, but now you have to do his job, and there's probably loads of admin and paperwork involved in that. So, you know, behave, hit your targets and maybe you won't get overlooked for that big promotion. 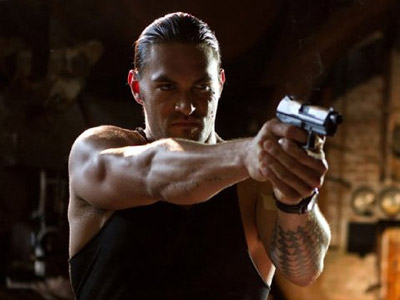 Employee of the month.


Compared to the self-important Oscar epics that descended on cinemas in January, Bullet To The Head is breath of fresh air that smells only a little bit cheesy. It's not going to win any awards and it barely passes the time between Expendables movies, but it's tight, focused, simple, no-nonsense fun. I can't tell you how much Les Misérables would have been improved if Hugh Jackman and Russell Crowe had settled their differences by cussing out during an axe fight. I can tell you, actually. Loads.

More:  Bullet To The Head  Walter Hill  Sylvester Stallone  Jason Momoa
Follow us on Twitter @The_Shiznit for more fun features, film reviews and occasional commentary on what the best type of crisps are.
We are using Patreon to cover our hosting fees. So please consider chucking a few digital pennies our way by clicking on this link. Thanks!