Worst superhero movie ever. Don't bother staying for the mid-credits sting to see if Wolverine shows up; there's NOTHING.


There was this guy I went to school with. Unbelievably clever. Knew everything, got As in every subject, aced his GCSEs and his A-levels. Went off to Oxford to study something like Ancient Greek, seemed like he was going to be some sort of brilliant academic. Then last year a friend of mine saw him at a festival, dressed like he lived in his car, and selling weed.

I always thought he'd snap one day. You know why? Couldn't talk to people. Had no interest in talking to people, in fact; he ignored everything except studying. I thought about him when I saw George Mackay in Captain Fantastic as Bodevan Cash, telling his father Ben that his rigorous home-schooling has left him brilliant but unable to function in the real world. "Unless it comes out of a book, I don't know anything!" 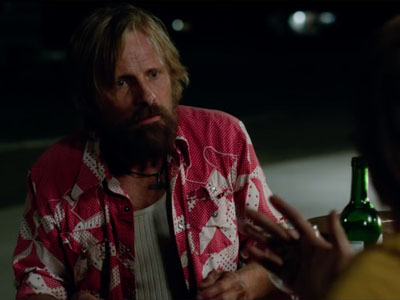 "Come on son, that's not true. I taught you how to make shoes out of mud as well."


Films want you to root for the guy with the alternative lifestyle or the radical take on the world, thumbing his nose at the stuffed shirts. Captain Fantastic isn't so sure. Ben (Viggo Mortensen) has rejected capitalism and lives off the grid in the woods with his family, insisting the children get a first-rate education through their own reading and his tests. They have to interpret, not just parrot it. He answers all their questions as if they were adults, including a brutally frank response to "Dad, what is rape?" and lets them drink wine.

Bad, self-indulgent parenting, right? Exposing your children unilaterally to your extreme ideology, and being wilfully blind to the sort of people it'll turn them into. Like making your kids watch rugby. Sure, but writer-director Matt Ross wants to show us something: these children are happy, woke af, and prodigiously clever. Ben himself seems more immature and impulsive than they do. Their mother Leslie is in the hospital, and when they get news that she's died, it's a road trip out into the real world to get to her funeral, even though her rich father has made it clear Ben isn't welcome.

Your sympathy comes and goes, just like it's meant to. The kids' gadget-obsessed two cousins, whom they meet when the family visits Ben's sister, are supposed to be the manifestation of the consumerist America they've rejected, and part of you wants to side with them because they're unpretentious and their dad, Dave, insists the Cash kids should be in a proper school, but you punch the air when Ben demonstrates how their home-schooling has left them far more knowledgeable than Dave's brats. Then later Leslie's uptight father, Jack (Frank Langella), wants to take the kids off Ben so they can live a traditional life, and enough's happened that this time you think, Maybe he's right. Pick a side and you end up on the other one 20 minutes later. 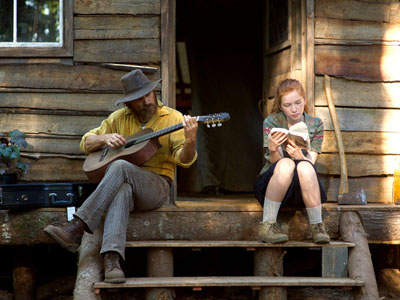 "Now THIS song is about how bad capitalism is."
"Uh-huh."


The path is Ben's to work out whether his absolutism is doing his kids any good, and Mortensen moves him along expertly from total conviction to doubt, so much so that his actions in the third act are performed like a man still attempting to go through the motions of rebellion but less sure that he doesn't look naive and ridiculous in the eyes of the people he didn't even care about before. Bodevan, whom Mackay plays with wonderful wide-eyed sincerity, is our own indicator of whether Ben's anarchist dream can really work: all this knowledge and he's used it to get into an Ivy League school, anathema to his father but the only traditional indicator of academic success that we and the rest of the Western world can cling on to.

It's about compromise, in the end, and the idea that rejecting entirely the ideas of others will never leave you fully rounded. You might achieve distinction in one area, and think you've got it all figured out, but life isn't about a narrow focus on one thing. If you make no effort to develop beyond it, engage with the rest of the world and socialise yourself, you'll end up selling weed at a festival.