If you type 'Carnage' into IMDB, you'll find it is the alternative title to The Nail Gun Massacre, A Bay Of Blood and even Prime Cut, an early Gene Hackman film about a cattle rancher who "grinds his enemies into sausage". It's the kind of title you'd expect to see propped up on the bargain shelf at Asda with a cover showing Stone Cold Steve Austin walking away from an exploding jeep. And yet here I am reviewing Roman Polanski's new low-key character-based comedy. It's almost a shame.

Based on a play - Le Dieu du carnage by Yasmina Reza - Carnage is not only an obvious adaptation throughout, what with its one camera, one-location set-up, it is probably the most play-iest film I have ever seen. You get the impression that if Winslet & co spared more time from their busy schedules, they could have rehearsed for weeks and filmed this all in one take.

While this won't seem very enticing to cinemagoers who prefer seeing more pixels for their pound, Carnage is actually very accessible, really enjoyable and, thanks mostly to a brilliant cast with an undeniable talent for comedy, really rather funny. 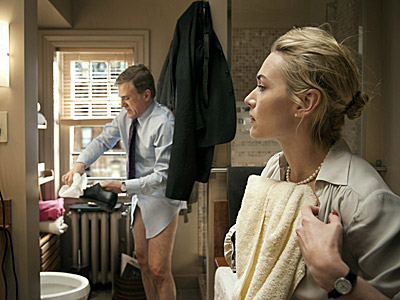 A man wearing no trousers is ALWAYS funny

The premise is embarrassingly simple: two sets of parents meet up to discuss a fight that broke out between their two children at school. As their conversation develops, forced pleasantries give way to stubborn passive aggressiveness and, come the film's end, descend into full-on, out of control, reckless behaviour.

Kate Winslet and Christoph Waltz play the busy work-hards who are guests at try-hards Jodie Foster and John C Reilly's house. Where Winslet is the initial peacemaker of the group, Foster is the antagonised shrew determined to see full justice done on behalf of her son. Meanwhile, Waltz and Reilly get to bond over a shared exasperation at their wives' irrationality before finding tension between themselves, exacerbated by the fact that Waltz keeps taking important phone calls. 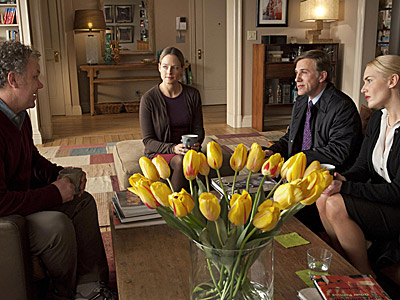 Ok, I'll say it - those tulips are ridiculous

Set entirely in a Brooklyn apartment (though obviously not filmed there *wags finger at Polanski*), you'd think that the film would be a visual dullard, but Polanski switches angles and makes optimum use of the space he has to keep the film from feeling too claustrophobic.

In fact, despite the obvious restrictions of the film, this could be Polanski's most accessible work for years: a lighthearted character farce filled with entertaining performances and probably some biting social commentary that went over my head.

Now excuse me while I search Amazon for Stone Cold Steve Austin films.

More:  Carnage  Roman Polanski  Kate Winslet  Christoph Waltz  Jodie Foster  John C Reilly
Follow us on Twitter @The_Shiznit for more fun features, film reviews and occasional commentary on what the best type of crisps are.
We are using Patreon to cover our hosting fees. So please consider chucking a few digital pennies our way by clicking on this link. Thanks!