As someone who has barely seen the first Cars, and who actively and selfishly steers his son away from knowing that a sequel even exists simply because I’ve heard it’s not very good, I am clearly not the best person on the Shiznit staff to review this film. No, that honour goes to Ali, who, for the past two years, has an unfinished article sitting in the site admin area entitled "What I've learned from Cars 2 after watching it 200 times". Yet, here I am, ready to impart my own unique viewpoint on the latest instalment of Pixar’s most-derided franchise. You ready? Here goes: It’s… alright?


Even with my limited familiarity with the first two films, somehow I still feel perfectly qualified to judge them. And it seems to me that they fail – and by 'fail' I obviously mean 'doesn’t quite meet Pixar’s otherwise ridiculously high standards' – on two fronts. First, the very premise is fundamentally flawed, and second, that prevents the films from fully exploring the concept in the same way that, say, no plaything gets unturned in the Toy Stories, or no part of the ocean goes unmined in Finding Nemo/Dory.

And so, when watching Cars 3, it’s impossible not to get distracted by the same questions of logic that have always dogged these movies. For example, when Lightning McQueen experiences a devastating mid-race crash early on, ambulances arrive containing other smaller paramedic cars – how does this weird role hierarchy ever make sense in a world of anthropomorphic automobiles? Even more maddening is when an off-screen activity occurs that would definitely require more dexterity than is afforded by four rubber wheels. At one point, McQueen presents a broken trophy to somebody, which he has supposedly just ‘fixed’ with some gaffer tape. I honestly spent the next 10 minutes thinking about how he possibly found the end of that roll. 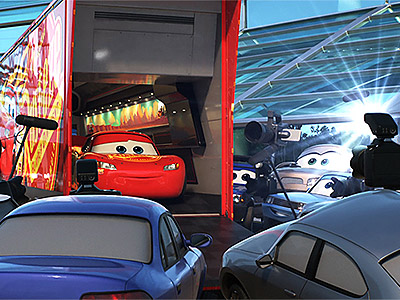 How are these cameras being operated? How were they even set up?


Most of all though, these films just don’t pop with the same kind of fun that exists in Pixar’s other output. Where you would usually expect to find scenes packed full of background detail and visual gags, Cars is very much just middle-of-the-road. And that’s what we have in the first 20 minutes of this threequel. In establishing Lightning’s career as a race champion, we have a chequered flag montage and lots of character introduction, and it’s all perfectly serviceable story setting, but there’s nothing to really enjoy. There are no stand-out jokes or important revelations. It only works to remind everyone where we left off last time before the real plot can start. It’s fine, it’s just not particularly creative or inspiring.

Thankfully, the film kicks into – yes - gear once Lightning recovers from his aforementioned crash and vows to train extra hard to defeat his new rival, the technically and statistically perfected Jackson Storm (voiced by Armie Hammer). From this point on, there is a genuinely interesting conflict to explore: the apparently over-the-hill-and-sensitive-about-it McQueen is trying to prove himself in a sport now overrun by new-fangled, streamlined car-fitties. As is often the case with franchises that return after an over-long absence, this film is about rebirth. Can McQueen literally reboot himself to become a success again? 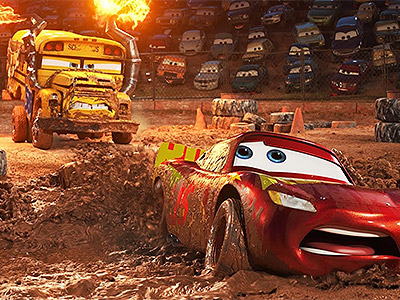 The scene where he has to literally escape Hell may have been a bit on the nose.


While this all finally provides some much-needed interest and investment, it’s the coincidental introduction of new car-acter Cruz (voiced by Cristela Alonzo, whose IMDB page is here to save you the effort of Googling her) that elevates proceedings. Initially a hard-line trainer at McQueen’s new fancy-pants facility, Cruz soon realises that she knows very little about real racing action and starts to learn as much from McQueen as he does from her. But with a naïve ditziness and friendly positivity, she is this property’s Dory. She has all the best lines, the most interesting arc and is at the heart of the film’s two only major emotional beats.

Outside of this, the film follows a typical underdog-story-by-numbers formula. After a brief run of trying the same super-efficient training techniques, McQueen eventually decides to ditch the treadmills in favour of feeling real dirt beneath his tyres during practice runs on the beach. When he and Cruz later seek out his old mentor’s mentor, they are taught all manner of old-school methods of getting game-fit, and the film goes full-blown Rocky IV in its comparison to Jackson Storm’s state-of-the-art strategy. 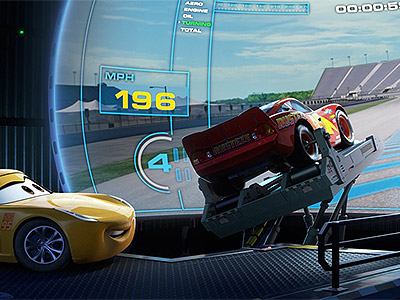 And, of course, Lightning still has to pass the Hazard Perception part of his theory test.


The film’s saving grace is a final act plot point that shows the only real sign that this franchise has matured beyond its original 'heh, talking cars' premise, but it takes a lot of autopiloting to get there. Overall, the film rarely feels fresh and exciting, not helped by the obligation to give original supporting characters token check-ins throughout, but there’s plenty here to hold attention. Not least for the frequently stunning animation, especially highlighted during some pretty incredible photo-realistic race sequences.

And yet, it can all so easily come undone at any moment thanks to the logic headaches that ensue. All it takes is for something as innocuous as one of the cars mentioning its parents, and entire scenes will be lost to the time spent on that thinker.

More:  Cars 3  Cars  Pixar  Owen Wilson
Follow us on Twitter @The_Shiznit for more fun features, film reviews and occasional commentary on what the best type of crisps are.
We are using Patreon to cover our hosting fees. So please consider chucking a few digital pennies our way by clicking on this link. Thanks!