"It's funny because Will Ferrell speaks Spanish!" was probably the gist of the Casa De Mi Padre brainstorming session. Yes, Will Ferrell does speak excellent Spanish, and yes, he is very funny with it. But this low-budget Spanish language Mexican western action comedy caper offers more than just cheap racial stereotypes: it's one of the funniest, cleverest spoofs since Hot Shots. Yeah you heard me right, Scary Movie 4.


With its tongue firmly planted in its tequila-soaked cheek, Casa De Mi Padre, ('House Of My Father') lovingly doffs its sombrero to the classic low-rent Mexican 'telenovelas' of the '70s and '80s. Armando Alvarez, played terrifically straight by Ferrell, has lived and worked on his father's ranch his entire life, but when his wealthy younger brother Raul (Diego Luna) returns home with beautiful fiancée (Genesis Rodriguez) on his arm, he brings with him all his problems. With his shady business dealings gaining unwanted attention from La Onza (Gael García Bernal), Mexico's most feared drug lord, the Alvarez brothers find themselves fighting to protect their family, their name and their home. 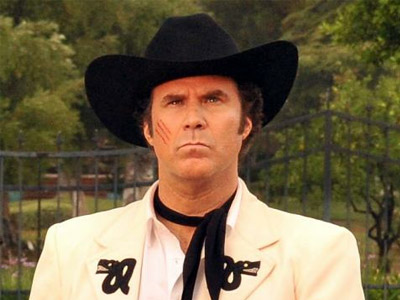 
With Adam McKay and Will Ferrell on producing duties, and director Matt Piedmont and writer Andrew Steele boasting Saturday Night Live and Funny Or Die credits between them, Casa De Mi Padre has some heavyweight comedy credentials behind it. Steele's theatrical, over-dramatic story might be a little thin on the ground, but it's the sharp-tongued script, steady barrage of visual gags and cracking attention to detail that carry it forward. Filmed in a grubby B-movie style, with scratched film and the odd missing scene; it's Grindhouse with giggles.

There are plenty of deliberate laughs to be had, mocking the obvious sub-par, low-budget nature of the film. In one instance we see a close-up of an ominous-looking man in sunglasses, only to see a crew member happily tucking into a sandwich in the reflection. There's even an entire scene that should have involved a fight between a coyote and a large wildcat, but instead we're given a hilarious explanation by one of the cameramen explaining how extremely difficult it is to train a coyote. With cardboard backdrops, fake horses, mannequins and miniature sets all tossed in for effect, Casa De Mi Padre really nails its spoof elements. With this volume of sight gags, a second viewing might be needed.

Like all good parodies, from your Airplanes to your Hot Shots, it's the straight-faced performances from the cast that really rack up the chuckles. Will Ferrell, oozing confidence with his grasp of the Spanish lingo, is the funniest he's been in a long time, effortlessly piling on the laughs and reminding us, just in time for Anchorman 2, that he's still one of the most entertaining actors in the business. 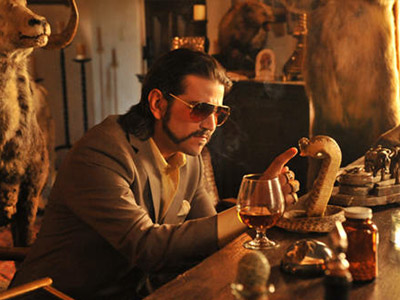 
Meanwhile, the usually serious Gael García Bernal and Diego Luna are revelations, both slipping into comedy with ease and happily letting loose. Bernal smokes two cigarettes at once without anyone batting an eyelid, and even in a bloody shootout, Luna - looking like a Mexican Nick Cotton - still has time to finish his whisky. All involved embrace the funny.

The film's biggest flaw comes with the combination of sight gags and subtitles. Together, they really don't work and you end up missing a lot of the jokes as you're too busy reading, hence why two viewings might not be such a bad idea.

Despite this small blemish, Casa De Mi Padre is still a sharp, confidently made film. Absurdly offbeat and very daft, everyone's game for a laugh and it shows. As far as Spanish-language western parodies starring Will Ferrell go, this is NUMERO UNO (*pause for laughter*).

More:  Will Ferrell  Diego Luna  Gael Garcia Bernal  Casa De Mi Padre  Matt Piedmont  Adam McKay
Follow us on Twitter @The_Shiznit for more fun features, film reviews and occasional commentary on what the best type of crisps are.
We are using Patreon to cover our hosting fees. So please consider chucking a few digital pennies our way by clicking on this link. Thanks!