Crazy Stupid Love is a movie that wants it all. It's a romcom that knows it's a romcom and wants you to know it knows it's a romcom. Characters reference popular movies and the clichés therein; by pointing out the elephants in the room, they're allowing us in on the joke. "Damn, love is crazy and stupid," they nudge and wink to us, but because they acknowledge the craziness and stupidity of movie romance, they assume they'll get away with it. Luckily for us, the characters of Crazy Stupid Love are so darn charming, they do.


The movie opens with a clever visual gag, as it pans across various pairs of canoodling feet under the tables of a fancy restaurant, before landing on a pair of grubby trainers opposite a plain pair of flats. These feet belong to Steve Carell, a devoted husband and father, and Julianne Moore, the wife who's about to ask for a divorce for dessert. This marital shockwave propels Carell into the path of club rat and bed-hopper Ryan Gosling, who 40-Year-Old Virgins his new buddy back into the mating game, but not before casting his (non-lazy) eye on gawky lawyer-to-be Emma Stone, who might just be The One™. 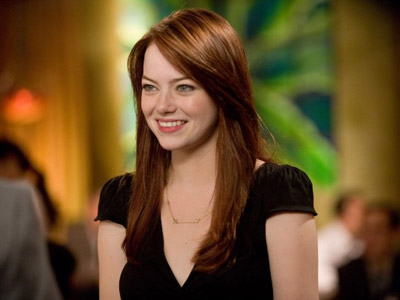 I'd hump through him to get to her.


Also, a bunch of other people are in love and do crazy, stupid things. Kevin Bacon's in it too, continuing his 2011 unbroken streak of playing total dickheads. Sounds like someone has some self-confidence issues.

Confidence is one thing Crazy Stupid Love isn't short on. The set-ups might be over-familiar, but when you have a cast as strong as this, working from a sharp and snappy script, you can forgive the odd narrative shortcut. Just watch Ryan Gosling go: a sleek, well-dressed alpha male with photoshopped abs, he's a walking, talking sex aid, but is always careful not to slip into full-on douchebag mode. He rocks just the right amount of mahogany in his spray-tan for us to know that a life lesson is coming his way, but sells the character well enough that we don't roll our eyes when it does. After turns in this and Drive, I'm officially #gayforgosling. 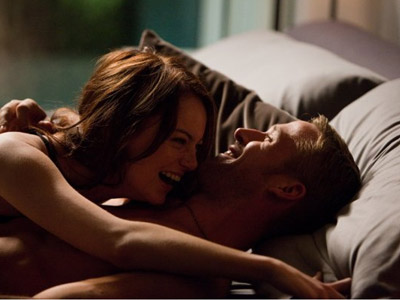 
But then, I guess I'm also #straightforstone and #creamingforcarell, because all of Crazy Stupid Love's major players put on a good show. Carell pulls another lovable loser from the jar marked 'sadsack' but injects the right amount of self-deprecating humour into the role, while Stone – my future bride and mother of my pseudo-children – is lively and bright, riffing off Gosling and creating enough chemistry that, actually, yes, you would quite like them to "bang". It's not weird if you fancy both of them.

If the movie's young couple provide the spark, the pairing of Carell and Julianne Moore are the flickering flame that's about to be extinguished (you just got METAPHORED). They're hardly a drag, but when your movie has an ensemble cast this big – with moderately incidental characters given their own lovestruck sub-plots – the movie's pace does lumber a little when it gets back to the 'serious' section. Divorce drama can tend to sap the fun out of a movie, but the script is knowing enough to add levity whenever the situation threatens to sag. Carell stands dejected as his wife speeds off in a cab, when it starts to rain. "What a cliché," he mumbles, just as we're thinking the same thing. Ha. 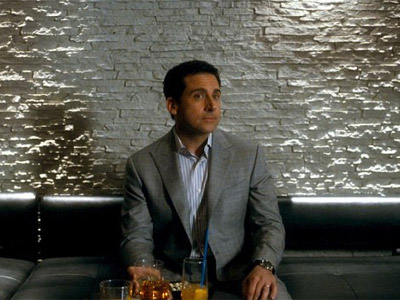 So many clubs, so many empty seats. PLOT HOLE.


Everything is going swimmingly until the 'Stupid' portion of Crazy Stupid Love kicks in; an astoundingly clunky final scene at Carell's son's graduation, in which characters deem it necessary to proclaim their deepest darkest thoughts on love to a gymnasium full of gawping extras. Quite why a movie that has shown itself to be so savvy up until this point feels the need for a grandstand cheeseball finish is unclear, but it's a sappy way for characters to tell and not show their feelings that feels like it's from another film.

(That's not to mention the extraordinary exchange between a 17-year-old girl and a 13-year-old boy that, if the genders were swapped, would make the Daily Mail explode. The best thing I can say about Carell's annoying little kid is that at least his parents mock his haircut so I didn't have to.)

Otherwise, Crazy Stupid Love is a romcom that elevates itself above the rabble by being smart enough to know the genre's rules and limitations inside out. It knows you'll care about well-written, rounded, witty characters, but it also knows you'll forgive its flaws. It'll make you laugh, it'll make you'll frown, it might even make you cry, but mostly it'll just make you want to have sex with Ryan Gosling.

More:  Crazy Stupid Love  Steve Carell  Ryan Gosling  Emma Stone  Julianne Moore  Kevin Bacon
Follow us on Twitter @The_Shiznit for more fun features, film reviews and occasional commentary on what the best type of crisps are.
We are using Patreon to cover our hosting fees. So please consider chucking a few digital pennies our way by clicking on this link. Thanks!