Time to break out the Tim Burton checklist then. Comedy-horror with supernatural elements? Check. Johnny Depp? Obvs. Score by Danny Elfman? Yuh-huh. Helena Bonham Carter? Of course. Pop culture retread? Yes. The time has long passed when one of Hollywood's most original directors has become a parody of himself. And as his once twisted gothic visuals have now given way to colourful cartoonish CGI, you have to ask "Damn - why didn't you make a vampire movie 15 years ago?"


But then this isn't just any old Twilight-inspired cash-in. Based on a supernatural soap opera of the 70s that everyone had long forgotten to care about, Dark Shadows sees Johnny Depp play a new pair of pale cheekbones in the form of Barnabas Collins, an 18th century man cursed by a witch to become a vampire and then buried in the ground for 200 years. When he is accidentally set free, he finds himself in the year 1972 and rejoins his dysfunctional descendants at the family mansion. There ensues Addams Family-inspired antics.

Unfortunately, once this set-up is established, the film carries on far too long as just a series of 'vampire out of time' sketches. Look, here he is seeing a car for the first time. Here’s how he reacts to television. Ha – he thinks Chloë Moretz should be married at 15 because that’s what things were like in his time! Luckily, Johnny Depp – despite becoming far too predictable in this kind of role now – knows exactly how to make the most out of these jokes and still wrings chuckles out of every scene with his usual composed befuddlement. 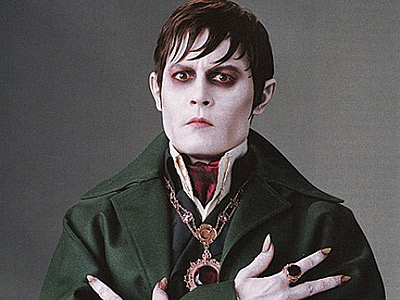 You know what I mean.


But then the aimless plotting still feels like a hangover from the source material. Just like any soap opera, this film suffers from a lack of direction; for much of the running time, it doesn’t seem like the story is getting anywhere, and most of the scenes don’t feel like they are advancing the plot in any way. It's only a horribly rushed ending that will prevent you from thinking that you should return to the cinema at the same time three days a week for forever to watch the continuing adventures of this misfit family.

In other ways, however, the soap opera theme works. Tim Burton subtly plays with daytime TV framing and blocking to imitate the over-the-top style for more melodramatic dialogue scenes. And Eva Green makes for a great long-standing villainess, playing a witch in love with Depp's Barnabas with wide-eyed stalker crazy that would be chilling if it wasn’t so brilliantly exaggerated. 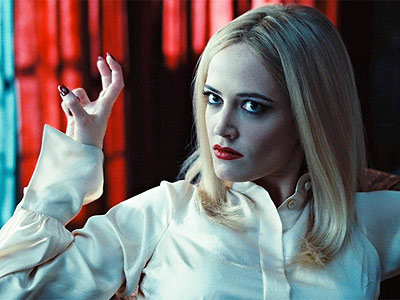 
In many ways, it's a shame that this is a film and not the start of an unconventional new mini-series – all the ingredients are here except a story fit to be told in two hours. As a result, it's an uncomfortable mix of comedy and drama, that pokes fun at a vampire while simultaneously trying to present him as seriously conflicted; we are then asked to root for a comic creation who is supposed to be deeply in love but who kills innocent people and has sex with other characters. The rest of the cast are mostly left on the sidelines, with Moretz in particular playing her least likeable character to date as moody teen Carolyn.

Dark Shadows really is just a mixed bag of chuckles and drama that never really gets the balance quite right. It's too comical to portray Barnabus' anguish, too 'soap'-y to feel like a single contained film and far, far too sexy to be a 12A (a blowjob gag? Really?). There's a lot of charm in the film, which is boosted by a rather excellent timely soundtrack (even if an Alice Cooper cameo stretches the limit of what you'll tolerate in a film), but, as we've already seen from Charlie And The Chocolate Factory and Alice In Wonderland, Tim Burton just can't get by on good looks and Johnny Depp's charisma any more.

More:  Dark Shadows  Tim Burton  Johnny Depp  Eva Green  Bella Heathcote  Michelle Pfeiffer  Chloe Grace Moretz  Helena Bonham Carter
Follow us on Twitter @The_Shiznit for more fun features, film reviews and occasional commentary on what the best type of crisps are.
We are using Patreon to cover our hosting fees. So please consider chucking a few digital pennies our way by clicking on this link. Thanks!