Dawn Of The Planet Of The Apes

CGI guys: I think it's safe to say the monkeys look enough like monkeys now. So could we maybe move the focus onto, y'know, the humans? Dawn Of The Planet Of The Apes is similar to its predecessor, Rise Of The Planet Of The Apes, in that the revolutionary effects work is so impressive, it successfully distracts from the film's complete and total lack of three-dimensional human characters. Though Dawn is a sturdy sequel that really gets into the swing of things about an hour or so in, it slips on that same banana peel – in making monkey more interesting and more fully-rounded than man, you question why they even bother giving the humans any screen time at all. I can confidently say that a third Apes movie featuring no human characters whatsoever would be the perfect evolution for an otherwise thrilling series that has itself evolved way beyond reasonable expectations.


Andy Serkis' king of the swingers Caesar is the movie's real protagonist, powered by a motion-captured performance that imbues the ape with just as much emotion as lead human Jason Clarke can muster with his puny human face. Dawn is Caesar's story: cast as the de facto leader of the apes in a post-apocalyptic world, in which humans have been reduced to pockets of struggling survivors by 'simian flu', he is the moral heart of the movie, forced to decide between compromise and all-out war with the humans. That Serkis – and the bods at WETA, let's not forget those guys – is capable of conveying this hardship with little more than facial expressions and rudimentary sign language is testament to how effective motion-capture is as a filmmaking tool.

Though Gary Oldman seems likely to emerge as the movie's bad guy as a do-or-die survivor with a penchant for shouting, it's actually Toby Kebbell's ape Koba who gives the movie a vital shot of villainy. Animated as near to photo-real as possible, unlike the more cartoon-like Caesar, Koba makes for a genuinely sinister antagonist, complete with foggy eye, jutting fangs and facial scars. He is the Brutus to our Caesar. The fact that even he is gifted with an appropriate back-story (the character is reprised from Rise, even if Kebbell is a new addition) shows just how much director Matt Reeves respects his simian cast. Kebbell is just as crucial to the movie's success as Andy Serkis. 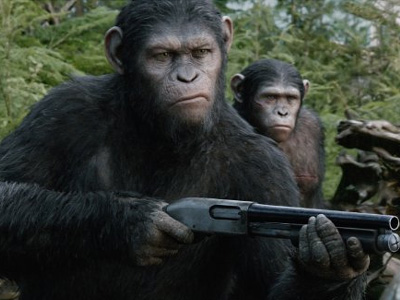 I feel like out of context this picture looks slightly ridiculous.


It's a shame, then, that Clarke and co feel so redundant as a result. Clarke's character Malcolm is the 'nice guy' who doesn't actually have any character - he's a convenient plot chess piece who's moved around depending on where the action is. His son, played by The Road's Kodi Smit-McPhee, is an entirely pointless inclusion. His thing is that he sketches, which teaches the apes about, I don't know, art or something? Big fucking deal Picasso, get the fuck out of the movie. Keri Russell's Ellie is the kind of useless female love interest that's so anonymous you need to look up her character name on IMDB; an Apes drinking game in which you did a shot every time she yells "Malcolm!" would have you paralytic before the end credits. She performs one helpful function in this movie. One.

Gary Oldman is an actor who can elevate poor material by his presence alone, but he's robbed of a decent character arc here when he goes missing for a good 45 minutes in the middle section. He does have one wonderful moment of catharsis involving an unguarded moment with an iPad, but that's your lot from Gary Oldman: Actor.

Otherwise, Dawn is an all-singing, all-dancing, all-screeching monkeyfest and all the better for it. There is a stellar scene in which Koba leads a band of apes into war against the human blockade that features not only heart-breaking shots of scared-looking chimps under fire and cowering behind cars, but also the mind-blowing sight of a monkey on horseback erratically firing a machine gun from each hand, literally going apeshit. Usually giving a character a gun in any given situation is the quickest and least satisfying thing you can do to generate threat, but as soon as the apes are armed, the tension is ratcheted up a notch. One of them even drives a tank. Yup. 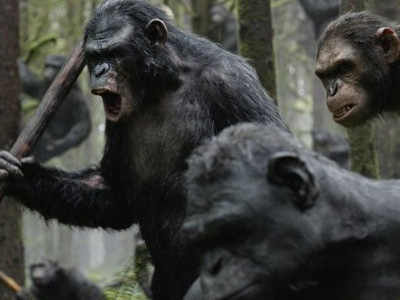 Also one of them plays an Xbox for like 20 minutes. (Not really).


Reeves does well to open up his movie to accommodate his simian stars, and though he stages action well in expansive environments that are beautifully rendered (then tarnished by terrible, gloomy 3D), the real genius of his camerawork is invisible – the panning, lurching and swooping that follows characters that aren't even there. It should not be so easily forgotten than 90% of Dawn Of The Planet Of The Apes' character roster does not actually exist; Reeves works with a fluidity that has you convinced otherwise.

This is undoubtedly a technical masterpiece, among the very best examples of motion-captured movies – but it is flawed in terms of content. The set-up is great, and the first time you hear the apes talk is just as frightening as in Rise, but the movie barrels towards the pre-requisite Final Action Sequence, armed with plenty of firepower but not the knowledge that the entire sequence is unnecessary. There must have been a smarter, more satisfactory way to end this sequel than getting all the principle characters in one location along with a bomb.

The screenplay by Mark Bomback and Rick Jaffa & Amanda Silver shows plenty of intelligence up until the point it's required to play dumb. The final set-piece is the equivalent of the YouTube monkey smelling his finger and falling out of his tree.

More:  Dawn Of The Planet Of The Apes  Matt Reeves  Andy Serkis  Jason Clarke  Keri Russell  Toby Kebbell
Follow us on Twitter @The_Shiznit for more fun features, film reviews and occasional commentary on what the best type of crisps are.
We are using Patreon to cover our hosting fees. So please consider chucking a few digital pennies our way by clicking on this link. Thanks!