Deliver Us From Evil

Have you ever had your enjoyment of a film completely derailed by a small, insignificant part of that movie? A niggle that becomes a bother than becomes all you can think about? I had that with possession thriller Deliver Us From Evil, a competent, forgettable horror flick from the guy who made Sinister. It's a fairly enjoyable movie, if a little flat and unambitious, but in terms of possession movies starring C-list actors with bad scripts, it's par for the course. Except for one thing. A single sound effect. Which ruins the entire movie.


I already wrote a full review of Deliver Us From Evil over on Film4.com so go there if you want some actual critical observations. In a nutshell, Deliver Us From Evil is a movie rife with cliché - it actually features a cat jumping out of a cupboard. In 2014. I have no problem with clichés in horror movies: it's part and parcel of the genre that you have these conventions and tropes that lead you down a dark alley while simultaneously warning you of what's to come. It's scary, but it's also entertainment. It's scarentertainment. (That's awful. Forget I wrote that).

Right, the sound effect. It's deployed fairly early in the movie, right about the time Eric Bana's skeptic cop starts investigating demonic goings-on in The Bronx. He's viewing CCTV footage (apropos of nothing, it's Sean Harris talking to a lion) when he hears the sound of children laughing. It's intended to be creepy, but only in that way that hearing children laughing anywhere other than a playground is creepy. The problem? The childrens' laughter is a shitty stock sound effect I've heard on a dozen films, TV shows and adverts for nappies. It even has a name: it's called 'The Diddy Laugh'. I know this because I hear it every day and it haunts my dreams. And not even in a scary way. Warning: this cannot be unheard.

I guarantee you have heard this sound effect at least 100 times in your life. If you're lucky, perhaps you never realised it. Because once you recognise it, you can't stop hearing it. It's the Wilhelm Scream of children laughing. You'll hear it in everything ranging from serious dramas to adverts for Quorn. In fact, there's a whole blog dedicated to its various uses. I know this because I spent about half an hour combing Google's search results for 'children laughing sound effect' when I should have been writing this review - if that's not proof it pulls you out of the movie, I don't know what is. (This may also be proof the movie isn't worth watching). 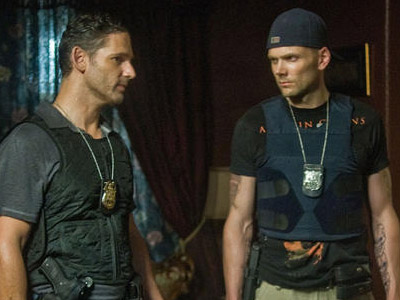 
There are dozens of these overused sound effects that burrow deep into your mindgrapes and refuse to leave. The Wilhelm Scream is the most famous, but there are others: there's a cat growl I hear at least once a week, and a creaky door sound effect I've heard in movies, TV and videogames. Then there was the time I made out one individual laugh from the laugh track on early seasons of Friends and then I couldn't even hear the jokes any more.

Deliver Us From Evil isn't the first serious production to use the Diddy Laugh sound effect, and I doubt it'll be the last. Just last year, I heard it in an episode of Breaking Bad and it took everything I had to keep watching (so brave, so strong). But these shows don't have the laugh as a focal plot point - usually it's just background noise. Deliver Us From Evil asks you to forget everything and listen to the Diddy Laugh. You're supposed to think, "God, children laughing, that's so creepy!" but all I could think was HOW DIFFICULT IS IT TO GET SOME NEW KIDS AND MAKE THEM LAUGH?

It's not just used once. It's rolled out several times. Imagine my directionless, invisible agitation. When Bana's cop hears the Diddy Laugh, he starts to think he's going crazy; I was doing a pretty good approximation of that myself. The rest of the movie could have been a masterpiece for all I knew; from the moment Deliver Us From Evil used the Diddy Laugh, it was sullied from there on in. They might as well have used a fart sound effect.

More:  Deliver Us From Evil  Scott Derrickson  Eric Bana  Edgar Ramirez  Olivia Munn  Sean Harris  Horror
Follow us on Twitter @The_Shiznit for more fun features, film reviews and occasional commentary on what the best type of crisps are.
We are using Patreon to cover our hosting fees. So please consider chucking a few digital pennies our way by clicking on this link. Thanks!