That Ryan Gosling: so hot right now. It's easy to forget he started his career as a Disney Mouseketeer in the same stable as Britney, Christina and Justin, but today Baby Goose finds himself with two critically-acclaimed movies out on the same day and a Clooney Oscar-grabber still to come. Ladies, if you thought he was hot stuff in Crazy Stupid Love as a spray-tanned, six-packed womaniser, then prepare for your ovaries to implode when you see him play a strong-and-silent getaway driver with a penchant for deep, meaningful gazing sessions. "Hey girl," he seems to say. "I'm capable of astonishing violence, but I'll make a good makeshift father for your son, too." Make no mistake: he's husband material.


Gosling's transformation from slightly weird character actor to full-on pant-dampening leading man is completed in Drive: he's a force to be reckoned with here, an instant icon of cool. I can only illustrate this in the best way I know how – via the medium of characters from internet rage comics. 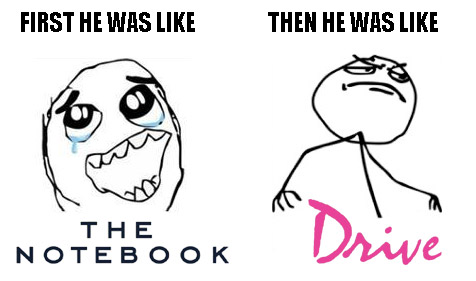 There's nothing to the character on paper – he doesn't even have a name. Gosling reportedly went through the screenplay, removing lines he didn't like ("Hey guys, I hope you don't mind, you can take lines out of the romcom I'm writing, haha!"), leaving a script where silences say more than exposition ever could. When paired with next-door neighbour Carey Mulligan, scenes between the couple are sparse but buzz with electricity, even if they could double as a staring contest if taken out of context. We'll take these pauses as evidence that less is more, not that the writing was just really shit.

The set-up is also minimal but equally effective: Gosling's getaway driver for hire takes on a job to free Mulligan's criminal husband from debt, but things predictably go awry. Before long, producer/gangster Albert Brooks has stuck his oar in, while his right-hand man Ron Perlman can't resist shoving his massive face where it's not wanted. 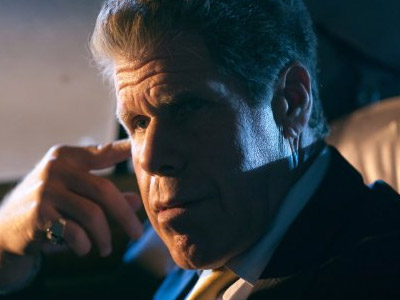 RON JUST WANT TO BE FRIEND


Director Nicolas Winding Refn wisely sticks to an uncomplicated, streamlined narrative, giving his handful of fascinating characters ample room to show what they're made of. The Driver is a picture of simmering intensity, capable of quick thinking and explosive acts of bodily harm, yet Gosling internalises much of what makes the character great, illustrated in a rousing opening scene in which he calmly evades police while doing 120mph and throwing his car round corners like someone who plays too much Grand Theft Auto.

Don't get your hopes up for too much auto-vehicular carnage – the focus here is character not car, and there's surprisingly few action sequences. Not that you'll care: the machine is just an extension of the man, and Gosling provides such an indelible image dressed in his scorpion bomber jacket, toothpick and leather gloves, he leaves behind an iconic character that's easily the sartorial equal of Steve McQueen's Bullitt. That's this year's Halloween costume sorted, anyway. TX Maxx will have that bomber jacket in stock, right? 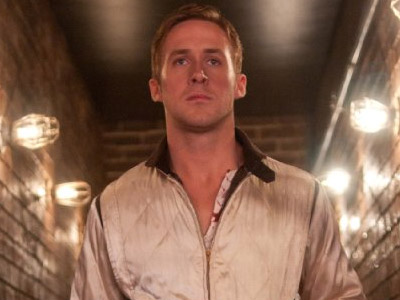 Hey girl, you are WEARING that outfit, haha!


A Refn novice, I can't compare it to his other work, but when stacked next to the rest of the year's rabble, Drive is easily one of the best looking movies of 2011 – certainly the coolest. Los Angeles by night is something to behold indeed, and it pulses with a neon energy that the director is quick to tap into. Even in daylight, Refn's LA oozes a seedy, old-school vibe, compounded by a wonderful 80s soundtrack and some great character work from actors previously thought of as fluffy and friendly ("My hands are a little dirty," says Gosling as he refuses to shake hands with Brooks' bigshot; "So are mine," comes the loaded reply). In the wrong hands, this could have easily lapsed into parody.

Really, Drive's only flaw is Carey Mulligan's girl next door, who slowly leaks momentum from the movie like a flat tyre. It's hardy the fault of Mulligan, who also opted to remove lines in favour of gazing lovingly at her co-star, but the character is really only there to be rescued. If Drive is an urban fairytale, as people smarter than me have been saying, then she's the princess at the top of the castle waiting for her prince to come. No offence love, but the prince is a lot more interesting than you. I do recognise that she's a crucial element in giving The Gos the motivation to switch up a gear, but she spends the movie at the mercy of men and shows little fight of her own.

Neither overblown action movie or intimate character study, Drive is somewhere in between – my approximation of "an arthouse Fast & Furious" wasn't too wide of the mark after all. Debate its pros and cons all you like, but there are two simple facts that are undeniable: Drive is cool as fuck, and Ryan Gosling is going places at about 150mph.

More:  Drive  Ryan Gosling  Nicolas Winding Refn  Carey Mulligan  Albert Brooks  Ron Perlman
Follow us on Twitter @The_Shiznit for more fun features, film reviews and occasional commentary on what the best type of crisps are.
We are using Patreon to cover our hosting fees. So please consider chucking a few digital pennies our way by clicking on this link. Thanks!