I don't want to write off an entire category of cinema, but... war films. They can be a bit heavy-going, can't they? Yes, there are some amazing standouts in this crowded genre, but it can be really hard to muster up the enthusiasm to watch a movie depicting the experience of war, which is basically: it's truly horrifying when not intensely boring. Luckily, things are different this time round, because a) Christoper Nolan films have never not been great, b) it's mercifully short at under two hours, and c) maybe there'll be a twist and the soldiers of Dunkirk will get rescued by Batman?


It turns out that, sadly, only the first point above really applies here. The thrifty 106min running time still feels like a long affair thanks to a slow, deliberate pace employed throughout, and sadly there's no sign of the hero that Dunkirk needs right then. But it IS exactly the kind of masterful movie that we have come to expect from Nolan. What is actually a very simple and straightforward story gives rise to heart-stopping tension, helpless tragedy and rousing triumph. It's a magnificent movie of staid heroism, utterly opulent in its bleakness.

This being Christopher Nolan, of course, the simple story unravels in an unconventional timeline, with three narratives playing out simultaneously, but at different rates. The first, in which a young soldier tries to escape the beach increasingly put under pressure by encroaching Nazis, plays out over a week. At the same time, Mark Rylance sets off in his boat with his two sons to help the rescue effort over the course of one day, and then we get just an hour of Tom Hardy's life as a Spitfire pilot gunning down German bombers. Cutting between the three, the film eventually starts to converge, overlap and drift apart again. It makes for a neat conceit that culminates in a collective resolution, but also emphasises the isolation of a singular point of view. 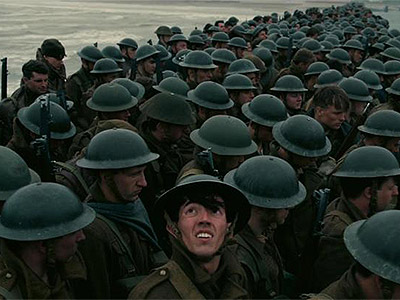 
This is a theme that is prevalent throughout the film: each single player is never aware of the bigger picture. "Where is the RAF?" asks one soldier in desperate frustration, unaware that Tom Hardy is exactly where he needs to be, stuck into a tense dogfight trying to prevent the bombing of a boatful of survivors.

It happens on a smaller scale too. Harry Styles (yes, Harry Styles, and yes, it turns out he is pretty good at this acting lark) complains that an old man "couldn't even look us in the eye", without realising, as the young man next to him found out, that the old man is blind.

This continually reinforced notion of ignorance, of being at the mercy of the restrictions of your own knowledge, sells the war experience in a way that is rarely seen. There's less focus on the heart-wrenching horrors, and an emphasis on strangerhood, of being surrounded by people in close quarters that you never get to truly know. Nor should you, because what's the use of making friends at this time? The very fact that not a single German soldier is seen in the whole film is significant - this is an unknown enemy, stripped of humanity, because, really, when it comes to this situation, where is the humanity in anything?

In this way, the one ongoing criticism of Nolan - that he is a cold, dispassionate filmmaker - works for him here. There's a distinct lack of dialogue and character interaction in favour of depicting quiet, concentrated actions instead, but here it is an artistic choice for the film rather than a by-product of the director's analytical eye. And these small motions, such as soldiers clamouring for a slice of bread, or trying for an age to climb up some rigging, are given an uncompromised amount of screentime, making everything feel like it has the utmost meaning in a world of uncertainty and helplessness. 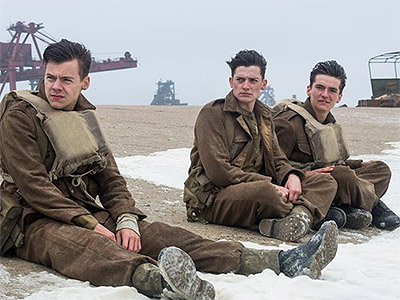 One Direction try to set a new trend for soul-crushing despondency.


Let's take a moment to talk about the film's sound design (*dons proper film critic hat*). This is one of the loudest films you will ever see (*takes hat off*). Gunshots crack with deafening force (one even made the person sat in front of me jump out of her seat), bombs explode with earth-shattering vigour and the strained metal of big-rig ships creak and groan against the vast sea. And all of it is engaged in its own battle with Hans Zimmer's relentless string-shredding, nerve-prickling score. It is so impossible to overstate the composer's palpable contribution here that it practically feels as much his film as Nolan's.

Unfortunately, after a long, drawn-out play of events, with three story arcs finally coming together, any sense of climax is fumbled. A confusing sequence of final attacks results in the film struggling to deliver tension at the right time. And a final resolution gets undermined by one last stab at another, less compelling threat than what went before it.

But then, I'm sure that's meant to be the point. That life in the thick of war doesn't ebb and flow to the tune of narrative structure, that the unerring unpredictability of battle is its own threat. But again, if you want unpredictability, I have a one word suggestion for you, Mr Nolan: 'Batman'.

More:  Dunkirk  Christopher Nolan  Harry Styles  James DArcy  Kenneth Branagh  Cillian Murphy  Mark Rylance  Tom Hardy
Follow us on Twitter @The_Shiznit for more fun features, film reviews and occasional commentary on what the best type of crisps are.
We are using Patreon to cover our hosting fees. So please consider chucking a few digital pennies our way by clicking on this link. Thanks!