It is hard, as a fan of a TV show, to divorce yourself from your feelings for it and watch the end-of-series movie without prejudice. And probably you shouldn't: it's meant for you, as a sort of valedictory reward for your loyalty. But then releasing it in cinemas suggests a pitch to a wider audience, so while it might satisfy the existing viewer, as Entourage sort-of-just-about does, you wonder who else they're expecting to queue up for tickets.

You can see why a film adaptation like The Inbetweeners Movie has a broad appeal. It includes recognisable, sympathetic character archetypes, whom you like and can root for straight away, even without having seen the show. Entourage – a show which I've watched and mainly enjoyed throughout its whole run – is a harder sell to a cinema patron going in blind. Vince, Turtle, Johnny Drama, E and Ari are rich Hollywood playboys, living a hedonistic lifestyle, and on TV it takes a little time to establish why we should care about them. Not much effort is made here to let non-fans in on the action.

Yes, there's Piers Morgan at the start, presenting a snippet about the gang on his prime-time show Exposition Hollywood, but all this serves to do is tell us who they are. It cursorily lists, but doesn't give us the chance to experience, the bits that make us care: their poor upbringings, Vince's devotion to his friends, Turtle's being butt of all the jokes when he was overweight, Drama's lifelong struggle to step out of his brother's shadow. So after ten minutes, if you've never tuned in before, you're faced with the prospect of a bunch of oversexed, moneyed douchebags in a movie about making a movie. Vince wants to direct, Ari, now head of Warner Bros, lets him loose with a big budget, and there are various issues around the film's finances to be overcome, alongside a few relationship problems. 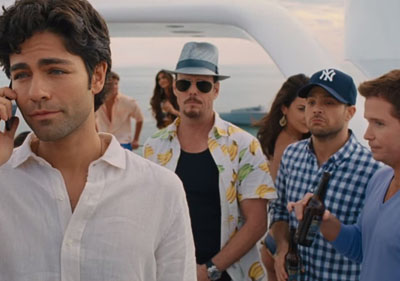 "Hello, operator? Could you send some more impossibly hot girls to my yacht, please? No, they won't need bikini tops. Or names."


From this point on, it's an extra episode, stretched out over 100 minutes. It indulges in the worst easy-way-out narrative tendency of the TV-to-movie transplant, namely to undo all the resolution of the series finale in order to reset the characters to default so it can be done again in the film. So Vince, who was flying off to get married in the last episode, has had it annulled after a week so we can have a movie in which he's shagging around again. E, who finally got back together with Sloan at the end of the series, has now split up with her, in order that his arc in the film can be whether he reunites with her again. (They also got together at the end of the penultimate season and were separated by the start of the final season, in order that that could be about their getting back together too. I remain unconvinced as to the long-term stability of this relationship.)

This is lazy, but moreover it nullifies any previous satisfaction at the characters having achieved their closure, undermining the idea that they had grown or learned from their experiences. Why do we want to watch it again, now we know any resolution being worked towards will prove irrelevant?

It's a hard enough question for a fan to answer, let alone a first-time viewer. I tried to watch through the eyes of someone who'd never seen Entourage before, and though I was undoubtedly incapable, all I saw was a sea of tits, parties, and rich guys with a total disregard for the value of money behaving like dickheads. The show's real strength, the accurate depiction of male friendship and the affection behind its unrelenting piss-taking, is there but only in a faint glimmer when you don't know the boys of old. 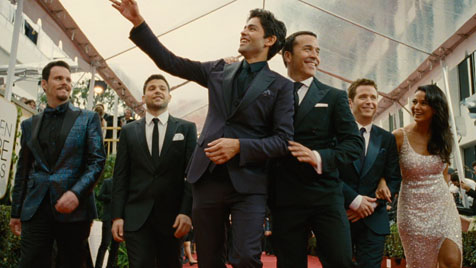 "Hi, we're here for all the free money and sex?"


E, whose role has always been the level-headed one, too sensitive to be interested in casual sex, has always been forgiven when he occasionally slags about, because you know he's not really the type and he feels bad about it. Shorn of this vital context in the film, he treats three women like shit, then gets mildly rebuked for it but is let off the hook and gets everything he wanted. I'd be interested to know how any non-fans perceive his character, particularly when he's supposed to have the anchoring role; the one you identify with.

But then that's the point: I can't imagine any non-fans going to see Entourage. It has no marquee stars; not even the cameos flagged up in the trailer are big enough to draw a crowd. And it has a story that ostracises anyone who either hasn't seen the TV show or reacts negatively to rich pricks throwing money around. (So, by and large, the population of planet Earth.)

In an age of risk-averse studio greenlights favouring sequels, remakes and established properties, you've got to admire Warners for the chutzpah of releasing a mid-budget film with no obvious audience. Fans more able than I to brush off the undermining of what's gone before will probably enjoy a bonus episode with three times the usual running length. Everyone else will wonder why they didn't just show it on HBO.