Fantastic Beasts And Where To Find Them

At a time when every superhero, toy, 80s cartoon character, board game and emoji are fighting for enough space at the box office to create their own movie 'universe', J.K. Rowling's work is already done. Her wizarding world of Harry Potter is well established and still ripe for further exploration, which is pretty much the perfect environment in which to churn out money-making tie-in movies of lesser returns. And yet, instead, a far greater challenge has been undertaken: birthing an entirely new franchise of films set within the same universe. Somehow, audiences are going to have to get invested in a new story that - we can assume - will never be as important as the one we have already seen. So those beasts had better be pretty bloody fantastic.


With Harry Potter's 'chosen one' narrative gone from the equation, Fantastic Beasts initially feels like lightweight padding; the kind of water-treading that you might expect from a film essentially based on a flimsy pretend-textbook produced for charity that might as well be six pages long.

With Eddie Redmayne's Newt and all his earnest affectations arriving in New York packing a carry-case full of magical critters, there's a surface-level plot involving a farcical suitcase-swap with Dan Fogler's would-be baker Kowalski and attempts to recapture the creatures that escape. It's cutesy fun with imaginative animals and mischievous antics, all aimed to keep the little kids entertained, even if, at one point, it looks like a giant sex rhino impregnates a tree by shooting his load of magical horn seed into it. 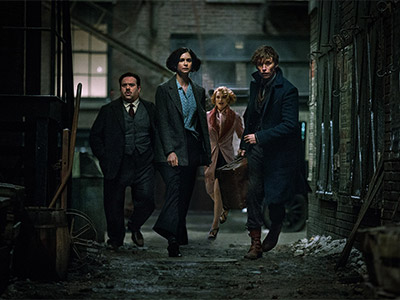 
While this is all going on though, Rowling and director David Yates are planting different kinds of seeds. There's an evil black cloud of CGI causing havoc, but what is it? An explanation will be along soon. There's a bad wizard causing civil unrest among the magic folk, but what is he trying to do? That doesn't matter right now. And what is Newt's story? How is he connected to Hogwarts? Who is the girl in the photograph? Sit back and relax - there are four more films to go...

Admittedly, it's borderline frustrating at times, but Rowling achieves a huge amount of further world-building with just an economic sprinkling of hints. When it comes to creating a new franchise, this is a masterclass in 'show don't tell', and there's not a shoe-horned post-credits teaser in sight.

This isn't even giving Rowling the extra credit she's due for what else she accomplishes here. A few name-drops link this film to the Harry Potter series while still keeping an appropriate distance, meanwhile a couple of word-swaps establish this magical world as firmly US-centric, widening the scope of the previous universe while maintaining a strong connection to it. There's a love story, there's development of ideas first borne in the HP films, a killer twist and, perhaps most importantly, there are clear political allegories too, with Rowling's own messages around social intolerance, child abuse wildlife preservation coming loud and clear through all the magical sparkle dust. 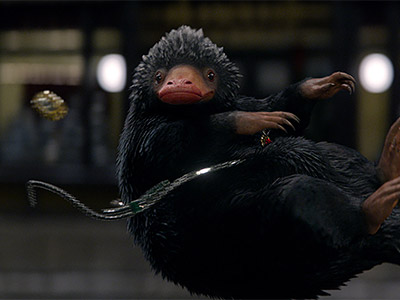 
All of which sounds far too heavy for a film about cute, funny nifflers and murtlaps and bowtruckles and whatever else was in that suitcase. Obviously, this is light entertainment first and foremost, with fun characters and magical mirth abound, not to mention an extraordinary amount of spectacle and wonder in a film that could have easily been written off as 'nothing new'.

But that was always going to be only half the job. The big challenge was in establishing an effective first instalment of a larger saga, one that rekindles interest in the massive behemoth of a film franchise that's still to come. That's the real fantastic beast to be found here.

More:  Fantastic Beasts And Where To Find Them  Fantastic Beasts  Harry Potter  Eddie Redmayne  JKRowling  David Yates
Follow us on Twitter @The_Shiznit for more fun features, film reviews and occasional commentary on what the best type of crisps are.
We are using Patreon to cover our hosting fees. So please consider chucking a few digital pennies our way by clicking on this link. Thanks!