Bruce Robertson is a cunt. A lying, thieving, cheating, racist, misogynist, homophobic shitstick who would sooner drug you and steal your watch than give you the time of day, and if he did give you the time of day it would be after looking at your own watch, which he has just stolen. He pinches kids' balloons, forces underage girls to nosh on his junk and screws his friends' and colleagues' wives. He's also a Detective Sergeant in Edinburgh's Lothian Constabulary, and probably the greatest lead character in cinemas this year.


Filth is brought to you by Irvine Welsh, author of Trainspotting, so I suppose this is the bit where we make all the comparisons. Yep, there's a killer soundtrack which includes some ironic use of classical music, some unsettling fantasy sequences, some kinetic camerawork, a dash of hyperactive editing and, of course, a deeply flawed, quite awful character from whom it's impossible to tear your eyes away. It'd make an excellent companion piece to Danny Boyle's film, but Filth also stands on its own as a movie bold and ballsy enough to jolt you into realising how stuffy most of what you've seen lately really is.

Most of Filth's success is down to an astonishing performance from James McAvoy. Forget the benevolent, peaceful young Charles Xavier and even the amoral Simon of Trance; McAvoy plays Machiavellian (McAvoylian?) bastard Bruce Robertson with a fierce, boggle-eyed lunacy that would send Mr Tumnus galloping back to his cave with shit dribbling down his goaty legs. Required to run the gamut from sympathetic, troubled victim of circumstance to sweaty, coke-fuelled rage monster, McAvoy is a horrifically enjoyable revelation here. 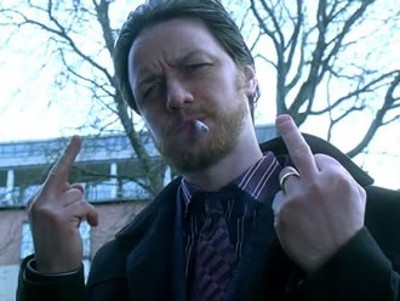 
As Robertson wildly navigates a murder enquiry by spending more time stepping over his colleagues in order to win promotion than actually investigating the crime, he fucks over almost everyone he meets: Eddie Marsan's likable doormat Clifford Blades, ostensibly Robertson's best and only friend; Jamie Bell's cocky but inadequate rookie Ray Lennox; even Kate Dickie's Chrissy, the wife of another colleague with whom Bruce enjoys regular S&M sessions. Only Joanne Froggatt's Mary brings out the nice guy - and there is a nice guy, but he's buried beneath layers of arseholery so deep that we're encouraged to wonder how things ever got so bad.

Which is where Filth loses its edge somewhat; scenes in which a nightmarish psychiatrist (Jim Broadbent) gradually reveals what's at the centre of Robertson's rotting soul feel a little pat, as if they've been added at the last minute in order to clear up any ambiguity. But it's a minor niggle in a film that's otherwise perfectly judged: writer/director Jon S. Baird never lets the insanity get too exhausting, and when sentimentality threatens to creep in you know you're not too far away from someone yelling something like "GET YER FACE OFF MA COCK!" 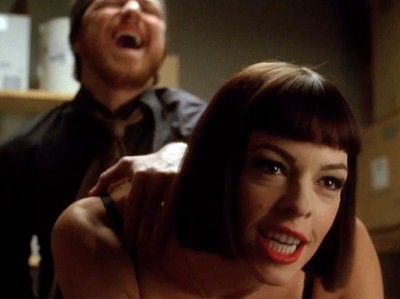 I was as surprised as you to see the Daily Mail's Chris Tookey give it one star.


As the murder investigation, the promotion race and Bruce's severe mental issues culminate in typically berserk fashion, seasoned audiences may be unsurprised by the final act revelations. But that's a small price to pay for a journey so utterly bonkers, degraded and, well, filthy that it includes Frank Sidebottom, Shakin' Stevens and a gallery of photocopied cocks as a matter of course. Wrong on almost every level but so, so right, Filth is simultaneously hilarious, appalling and tragic, and James McAvoy both its greatest asset and its biggest cunt.

More:  Filth  Jon S Baird  James McAvoy  Jamie Bell  Eddie Marsan  Imogen Poots  Joanne Froggatt  Jim Broadbent
Follow us on Twitter @The_Shiznit for more fun features, film reviews and occasional commentary on what the best type of crisps are.
We are using Patreon to cover our hosting fees. So please consider chucking a few digital pennies our way by clicking on this link. Thanks!