War movies. Huh. Good God. What are they good for? By now, it feels like every manoeuvre, every landing and every battle of the Second World War has been fought and won or lost on screen. Subsequently, each new WWII movie has to prove its worth before a single shell has been fired or bomb dropped. David Ayer's Fury doesn't even bother pretending it's based on a true story, jumping straight into action with an ambush, a dead Nazi and a knife through the eye socket - and it gets progressively more grim from then on in.


"You probably heard we ain't in the prisoner-takin' business; we in the killin' Nazi business. And cousin, business is a-boomin'!" That's Brad Pitt's war hero speaking there; granted, it's Lt Aldo Raine, his character from Inglourious Basterds, but he shares an ethos with Fury's tank commander Don 'Wardaddy' Collier. This is Pitt in 'War is Hell' mode: sombre and softly-spoken, but bloodthirsty with it. Fury plays by Wardaddy's lead - at times it feels like it's not so concerned with the machinations of World War II or the dynamics of battle, but more the fatal consequences, bloodied and burned and crushed beneath tank treads. "Wait 'til you see it," warns Shia LaBeouf's Quiet Religious Guy Who Ends Up Going Crazy. "What a man can do to another man." He's not wrong. This is stomach-churning stuff: war movie via Grand Guignol. 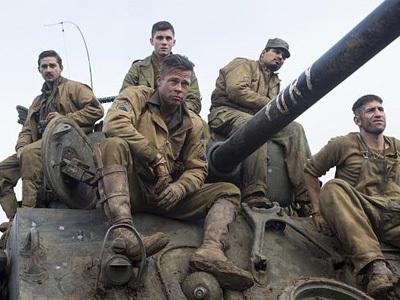 The first rule of Fury club: no straddling the turret and going 'Wahey'


There are moments of brutality contained within that take the breath away; we are a long way from Wilhelm Screams and theatrical tumbling from balconies. Soldiers are torn apart in battle, eviscerated, annihilated. Man vs tank never ends well. It's ugly, repulsive stuff, but is just as it should be. Fury goes to great lengths to show you just how horrendous war can be, then it stamps on your face for good measure. Occasionally this is to the movie's detriment, such as when a desperately needed quiet moment between assaults is shaken by shelling, snuffing out the life sprouting from beneath the cracks. But there can be no claims of exploitation levelled at David Ayer. Fury is a film that is almost barren of humanity.

Ayer marshalls the action impeccably. The good thing about tank warfare is that their slow and cumbersome nature helps build tension. Battle scenes are easy to follow, geographically speaking, and Ayer's camera gives you grade-A seats, whether you're sat inside the tank with the crew or hoisted above the battlefield for a top-down view. One sequence, featuring three Allied tanks versus one German tank, is almost unbearably exciting - the difference between life and death is in the crank of a wheel, the speed of a loader, the accuracy of a gunner. It literally left my hands shaking.

These scenes matter because time spent inside the titular tank bonds you to its crew - the cramped conditions make you feel like the sixth man sharing Fury's oxygen. There's no weak link in the chain: Pitt, weathering rather wonderfully, has the quiet confidence and stoic gravitas of a Tommy Lee Jones in training; Logan Lerman is excellent as the pre-requisite kid in a man's world, slowly morphing from greenhorn wallflower to killing machine; even Shia LaBeouf, with his thousand-yard 'seen some shit' stare, convinces as a Bible-thumper. Jon Bernthal, of Walking Dead fame, has the most unpleasant role as Fury's pig hick, but he does excellent work, summing up his character in just one revealing exchange with Lerman: "The reason we're so hard on ya is because you're a good man... and we ain't." It's enough to make you forgive his Simple Jack hairdo. 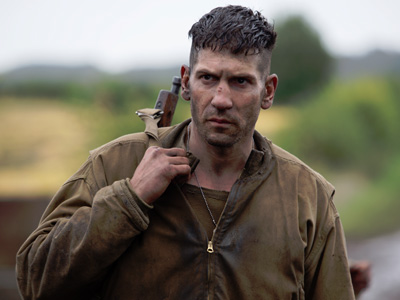 
Dialogue is hard to follow in places, particularly when uttered during gun-fire, moreso when filtered through impenetrable midwest accents; peppered with grunts, slurs and old-timey war lingo, it occasionally feels like white noise. But Fury is not a movie in which anyone has anything particularly profound to say, nor need they. Body language and physicality says much more - the first scene in the tank, the crew pounding on each other with cabin fever, tells you everything you need to know. In quarters this claustrophobic, grunts and nods are all that's required.

Where Fury really needs to speak up is in its final scenes. Wave after wave of Nazi soldiers pile up like corpses in a videogame and the chaos continues for so long you almost forget the need for the last stand at all (I have vague memories of Jason Isaacs pointing to things on a map looking serious). Indeed, though Fury is small and claustrophobic, the movie's final shot should feed into the bigger picture: for what purpose these men put their lives on the line. The statement seems to be 'Look how many Nazis we killed!' That's no bad achievement in itself, but it doesn't feel like a particularly noble reason to make a war movie. That's Rambo thinking.

Fury succeeds in what it sets out to do - convince you that heroism is born out of horror - but it's comprised of assaults so visceral and uncomfortable, all it really convinces you is how lucky you were to be born into a generation where the horrors of war are held at arm's length.

More:  Fury  David Ayer  Brad Pitt  Logan Lerman  Shia LaBeouf  Jon Bernthal  Michael Pena  Jason Isaacs  War
Follow us on Twitter @The_Shiznit for more fun features, film reviews and occasional commentary on what the best type of crisps are.
We are using Patreon to cover our hosting fees. So please consider chucking a few digital pennies our way by clicking on this link. Thanks!