Great news for fans of Nic Cage's inimitable, eccentric acting style: Ghost Rider 2 contains some truly classic batshit Cage moments that seem destined to grace gifs and YouTube clips across the Internet. Bad news for everyone else: otherwise, the film is pretty rubs.


Maybe this will come as no surprise to those who have seen the first balls-achingly bad-but-fun Ghost Rider, but the switch up in getting those crazy Crank directors Neveldine and Taylor to take on the film seemed like a brilliant coup that would result in AWESOMENESS and MADBONKERSFUN. And in many ways that's exactly what we get here, but we also have to put up with a threadbare storyline, characters that make absolutely zero sense and a plot that has more holes than a wire mesh bee helmet.

Picking up some years after the events of the first film, Johnny Blaze is in hiding in Eastern Europe, trying to avoid becoming his bony alter-ego. Yet, within 15 minutes, Idris Elba has asked for his help and made a vague promise about helping Blaze with his curse and, lo and behold, the biking hell-demon is back swinging chains and scaring the fiery bejesus out of common thugs. Tasked with a holy mission to protect a young boy and his mother, Blaze/Ghost Rider fend off the little scamp's criminal dad and a shadowy Ciarán Hinds who has a few demons of his own.

Whereas the first film focused on the origin of Ghost Rider and Johnny Blaze's struggle to deal with his curse, human takes a backseat to devil here – it's all about the flame-headed adventures of our titular Hell's Angel. While this means that we are treated to some gloriously mental supernatural shenanigans including, at one point, Ghost Rider turning an entire building site crane into his hell vehicle, sometimes things can get a little too... 'Wuh?' 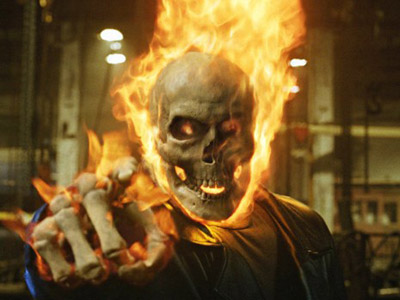 Can YOU tell what's going on?

For example, Ghost Rider's jerky mannerisms and movements are obviously supposed to suggest an unnatural quality, but occasionally it's hard to understand exactly what's going on. In one encounter, Ghost Rider gets attacked and then ends up floating horizontally, quickly spinning round before suddenly stopping and confronting his next victim. Was he supposed to do this? Was he hurt or was it some demonic trick? Comic-book laws or not, something that bizarre requires an explanation.

And this is a recurring theme throughout the film - what the hell is going on? Character morals and motives are muddied beyond recognition. We know that Johnny Blaze is essentially good and the gang leader chasing them is a douche, but what about everyone else? The boy at the heart of the plot obviously has some kind of biblical importance, but how so? He seems to act both godlike and evil whenever the script requires it. When a bald Christopher Lambert shows up as a character that appears menacing and mysterious but otherwise does nothing, you'll have long forgotten to care about what's going on story-wise and learn to just enjoy the mental Cage moments. 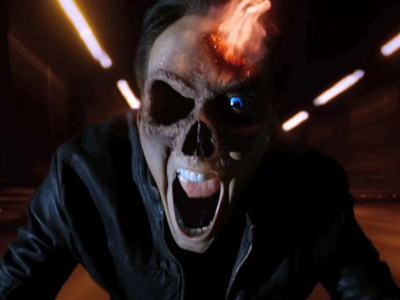 And go mental he does. With an occasional chaotic sequence (quickly edited in such a way that it wouldn't look out of place in the opening credits of an MTV reality series), Cage gets to gurn and glare and freak out in front of the camera in all sorts of weird and wonderful ways. The real treat comes during one particular slow transition into his skeleton-headed alter ego in which Cage resorts to screeching, "It's scraping at the door!", a line-reading that deserves to remembered alongside The Wicker Man's bees, National Treasure 2's whiskey and the Vampire's Kiss alphabet in the echelons of Cage's most hilarious acting moments.

And yet, there's humour in Cage's performance, even in the most mundane of scenes. Completely nondescript and unimportant lines drew titters from the audience of the screening I attended just because they were delivered in his hilarious prolonged drawl. By the time there comes a seemingly innocuous comment about bees, you have to wonder whether Cage is actually attempting to parody his own acting reputation.

Overall, the film is hugely enjoyable and hugely terrible in equal measure. The plot is rife with questionable moments (including a scene in which Ciarán Hinds bestows a dead guy with powers comparable to Ghost Rider: the power of... er... decay. Not death, or fear, or fire – decay), and yet it's a film certainly worth seeing at least once to revel in Cage's balls-to-the-wall acting storm. In terms of stupid, dumb, no-brainer comic-book films, they don't come much stupider, dumber and no-brainier than this.

As if you were expecting anything less.
More:  Ghost Rider Spirit Of Vengeance  Ghost Rider  Nicolas Cage  Idris Elba  Neveldine And Taylor
Follow us on Twitter @The_Shiznit for more fun features, film reviews and occasional commentary on what the best type of crisps are.
We are using Patreon to cover our hosting fees. So please consider chucking a few digital pennies our way by clicking on this link. Thanks!