Things that ruin your childhood: discovering that your parents are the tooth fairy/Father Christmas. Learning that grandparents and pets can die no matter how much you love them. Jimmy Savile. These are actual things that leave a lasting mark. A remake of a film that you probably originally saw on TV three years after its release because you weren’t old enough to see it at the cinema when it actually came out will not “ruin” your childhood memories (I also had an extended metaphor about how I have continually enjoyed cheese toasties despite once eating an amazing one a few years ago but that doesn’t diminish the good one I had, but I think you get my point). The new rebooted Ghostbusters isn’t going to piss on the fact that you can remember things from a movie that’s over 30 years old. But before I have to hand in my "I was a child of the 80s" badge, I’m going to go out on a limb and say Ghostbusters 2016 is actually funnier and scarier than the original.


That’s not to say it’s better, though. Or even perfect. It’s no match in terms of Harold Ramis and Dan Ackroyd’s writing, nor Bill Murray’s comedy chops, but in all honesty, whatever could be? It was a ballsy move by Paul Feig to attempt the reboot in the first place, but he obviously does so from a place of love and fondness for the first ‘Busters. It’s got Slimer! It’s got Ecto-1! It’s got cameos from the original cast! And it also manages to tread its own path and shake off the ghosts from the past to properly reboot the Ghostbusters world (it’s quite clear early on that a simple sequel wouldn’t work if everyone now believes in ghosts). No matter who was cast, or who was behind it, nothing could stand up to the original, so it seems unfair to compare the two versions, particularly when this reboot radiates so much charm and enthusiasm that it doesn’t really matter.

It helps that director Paul Feig doesn’t shy away from the infamous internet trolling after he announced his plans for a mainly female cast; Melissa McCarthy’s lovable scientist Abby tells Kristin Wiig’s Erin Gilbert not to read online comments (“Ain’t no bitches gonna hunt no ghosts”) dismissing it as “It’s just a list of what crazy people write in the middle of the night”. Elsewhere, the gags are generally broad. In particular, Chris Hemsworth’s impossibly stupid receptionist Kevin, who doesn’t have lenses in his glasses and finds it impossible to answer the phone. Hashtag not all men. 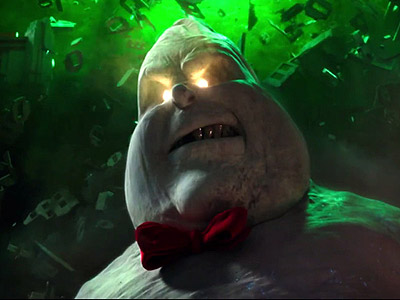 Thank god there's at least one other white male character in the film though, eh?


The film starts on a high note, and this being a Paul Feig film everyone gets to do and say something funny, even the bit part players. Whilst first time around Murray and the guys played it straight, now everyone’s in on the joke. I guess we can blame the success of the Marvel movies for a familiar self-aware rata-tat-tat type of dialogue - even Poe Dameron managed to sneak in some snark into The Force Awakens – but there are actual good jokes too and it’s these that propel us through a sagging middle third when the quartet aren’t given much to do, including a great accusation that Wiig throws at Andy Garcia’s non-believing New York mayor, "You’re just like the mayor in Jaws!"

The film comes back to life though with a thrilling effects-laden finale that includes Kate McKinnon’s Holtzmann to live out every lil’ Ghostbuster’s fantasy and blitz her way through a wall of spectres with new handheld proton packs in a sequence that would sit comfortably in any action movie. Ignore the haters that focus on the fact that our ladies shoot the final big bad in the groin, because there’s no deeper level there: getting hit in the dick is funny, just see "Man Gets Hit In Groin By Football". 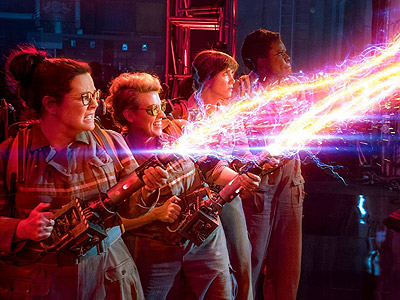 
Ghostbusters 2016 isn’t perfect: the scientific dialogue sounds unwieldy and there is the sense that yes, we’ve seen this all before. Which leads to the giant Stay Puft Marshmallow Man in the room as to whether Ghostbusters needed a reboot in the first place? Maybe not to anyone over the age of 30, but were you really bothered by films from three decades before when you were a kid? And no one can honestly claim to be surprised that studios are out to make a quick buck in the easiest way possible, particularly when Angry Twitter Users are just as happy to fork out for endless comic-book movies.

The truth is, however, from start to end this film is just pure joy, a lot of which is borne from the fact that the original is so much fun that there’s no point trying to lay those ghosts to rest. The fact that it’s four dames wielding the proton packs shouldn’t even come into it, because it’s 2016 for fuck’s sake.

More:  Ghostbusters  Melissa McCarthy  Paul Feig  Kristen Wiig  Kate McKinnon  Leslie Jones  Chris Hemsworth
Follow us on Twitter @The_Shiznit for more fun features, film reviews and occasional commentary on what the best type of crisps are.
We are using Patreon to cover our hosting fees. So please consider chucking a few digital pennies our way by clicking on this link. Thanks!