After riding the Sue Sylvester Express for the second time, season two of Glee has drawn to a close. But how about that season finale?

It's a well-known fact that sequels often struggle to live up to their predecessors. The first season of Ryan Murphy's smash-hit show, Glee, was, to put it simply, sensational. Offering up some choice tunes, fun, laughter, tears and just generally one massive guilty pleasure, it seemed impossible that it could be surpassed. True to tradition, the first half of season two just didn't quite hit the same mark.

That being said, I still thoroughly enjoyed season two as a whole. It was a bit of a slow starter but with the introduction of a sexy new love interest for Kurt, a host of celeb cameos and songs to blow your socks off (my personal fave being Rachel and Blaine's cover of Don't You Want Me Baby) it almost pulled a Terminator 2 on me.


And let's not forget Sue Sylvester. I'm a big Jane Lynch fan anyway, but with lines like these ...

"
"
Every time I try to destroy that club, it comes back stronger than some sexually ambiguous horror movie villain.
"
"
I'm gonna sue the pants off you, Will. I'm gonna take your house, your car, your extensive collection of vests. I mean, seriously, you wear more vests than the cast of Blossom. I'll see you in court.
"
"
Yes, these seats are currently being occupied by my ghost friends. My ghost friends. Hideous, lonely faculty members who met with an early death from good old-fashioned schoolyard bullying. And you know why? They tried to cross me. So why don't you just keep on walking?
... Glee has become not only a universally feel-good show, but also a laugh-out-loud comedy.

I hate to sound sycophantic, especially as I'm normally terribly judgemental (!), but the main thing I love about Glee is the way it encompasses all genres, which I think is why it appeals to such a large amount of the UK populous. The solid and all-round infectious spirit from season one provided some hearty ingredients to tick everyone's boxes for season two of the show and, although it lacked the same punchiness that sky-rocketed the first season to fame, its mass appeal was enough to keep it going strong.

Plus, with the exclusion of Rachel's 'My Hairband', those original songs weren't too shabby either! Cheesy and from the heart ' everything that the Glee viewership could ask for. 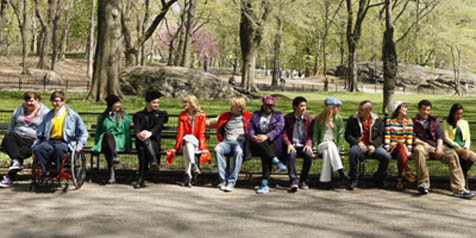 Amazing. They banned smoking in Central Park but you're still allowed in dressed like this.

Following on from the disappointment of losing Regionals in season one, I knew for sure that the McKinley High New Directions must be set for a win in season two. You can imagine my disappointment when the club failed to swipe the Nationals trophy and suffered the frustration for a second time.

I'm sure Murphy is trying to keep the show as realistic as possible, but let's face it ' most of us watch TV to escape reality! I'm sure everyone was with me in hoping that those Vocal Adrenalin chumps came in 49th place so that New Directions could blow a big fat raspberry in their faces.

But alas, it wasn't to be. What was a strong season ended woefully again. Sob. Here's to hoping they finally see victory in season three.

More:  Glee  Fox  E4  Jane Lynch  Ryan Murphy
Follow us on Twitter @The_Shiznit for more fun features, film reviews and occasional commentary on what the best type of crisps are.
We are using Patreon to cover our hosting fees. So please consider chucking a few digital pennies our way by clicking on this link. Thanks!