Godzilla is the kind of excellent monster movie you can only make when you've already seen someone else make it exactly wrong as your reference. Though director Gareth Edwards first movie, the fittingly titled Monsters, was a stunning debut, Roland Emmerich's ill-advised 1998 Godzilla remake acts as Edwards' training wheels – a clear guide on what not to do. Where Emmerich favoured levity, Edwards favours atmosphere; where Emmerich keeps it local, Edwards goes global; Emmerich's disowned creature became officially known as 'Zilla'; Edwards' king of monsters is quickly labelled "a God". And rightly so, because this Godzilla stands tall in the modern pantheon of monster movies: a no-nonsense beast from beyond that makes his 90s counterpart look like a bogey with legs.


There is an inherent problem in making a 'serious' movie about Godzilla – one with shades of 9/11, the 2004 tsunami, echoes of Fukushima and notes of climate change discord – in that no matter how grave a face you instruct your actors to put on, your movie is still going to end with giant monsters having an angry cuddle. Attune yourself to this Hollywood logic, however, and there's very little that should stop you from enjoying Gareth Edwards' Godzilla – it's an intelligently structured, delicately composed, artfully designed movie that still stomps the competition in the destruction derby that is this summer's blockbuster line-up. Godzilla is an atomic blast.

After a valiant attempt at tying in Godzilla's origins with the 1954 nuclear tests in the Pacific (intones Ken Watanabe, solemnly: "They were trying to kill it") and a pre-credits meltdown in the Far East, we pick up with Joe Brody (Bryan Cranston), a scientist attempting to uncover the truth behind a tragedy that's befallen his family. Arrested for trespassing in a quarantine zone, soldier son Ford (Aaron Taylor-Johnson) is sent to pick up his pa when the mother of all metaphors breaks cover to "take us back to the Stone Age". 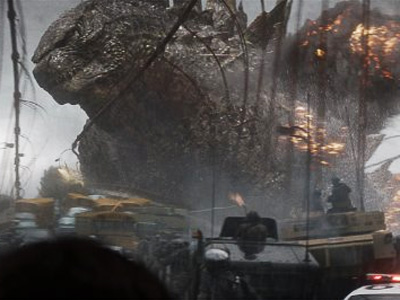 And not in a cutesy, Flintstones-esque way, either.


Once Godzilla rears his ugly head – actually a damn sight more attractive than Roland Emmerich's reptilian effort – the movie shifts up a gear, and the characters, well-drawn up to this point, are required to go where the action is. Consequently, Godzilla feels like a movie of two halves: once the kaiju-on-kaiju action commences, the family dynamics and drama of the first half seem fairly inconsequential. Edwards does at least attempt to construct characters you care about, but they're a curious bunch that clam up when it comes to the crunch. Taylor-Johnson, for his part, could well be a mute for the final 30 minutes for all it matters; Elizabeth Olsen, his nurse wife, takes shelter for the final showdown but isn't required to save a single soul.

My advice would be to conveniently bench any concerns you have about character arcs or sparkling dialogue or overt exposition and allow yourself to soak in the movie's atmospherics, because Godzilla is rich with evocative, memorable imagery. The beast itself is obscured for an hour, hidden behind smoke, rubble and water (other monsters are not so hidden) but the world Edwards places them in is one of doom and gloom: overgrown wastelands, sodden cityscapes, burnt orange skies, plumes of thick black smoke. If Godzilla was scratch-and-sniff, the acrid tang of atmosphere would sting the nostrils. It is the world of Pacific Rim with the lights turned low.

Sound design is equally epic: otherworldly throbs and hums that'll test even the biggest bass bins. The roar you've already heard is truly something to experience as loud as humanly possible, but Alexandre Desplat's suitably grandiose score is never mixed into the background, instead driving the action sequences in the absence of dialogue. Edwards frequently takes the opportunity to dial down the din, singling out audio for maximum effect; there's something chilling about seeing such a horrifying spectacle in near silence. 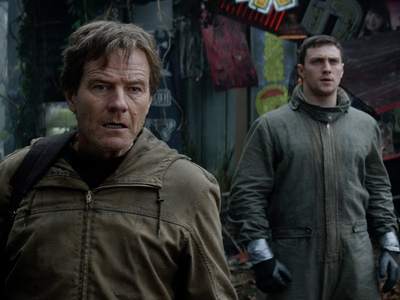 
Spielberg is the none-more-obvious benchmark here, and Edwards does a fine job of emulating him – from the obvious nods (Godzilla's fin juts out of the ocean like a Megaladon version of Bruce the shark) to the set-piece similarities (Jurassic Park homages a-go-go) to the tried-and-tested thematic devices (shit dads everywhere). There are even War Of The Worlds-style battles teased over yonder hills, but Edwards remains restrained and at least tries to put people in the thick of the conflict at all times. There are several expertly composed pans that take in the enormity of the situation, from monster right down to man, that you suspect Spielberg would be proud of.

Nonetheless, there are shortcuts here that perhaps a more accomplished director could have nipped in the bud with a few tweaks. A major character's death feels a little fumbled when it should be the emotional crux of the movie; instead it passes almost without comment. Ken Watanabe's character – basically Godzilla's #1 superfan – is awfully confident in the movements of an atomic rage monster: for a scientist, he sure does put a lot of faith in "nature's order". And it's alarming how quickly everyone aligns themselves to the viewpoint that Godzilla is the good guy and definitely should be left to his own devices (rather that, I suppose, than an additional 30 minutes of military types firing bigger and bigger guns into his hide).

Consider that this is still only Gareth Edwards' second feature film, however, and you'll forgive the odd bit of narrative chicanery here and there. Godzilla is a remarkably accomplished movie for a director still finding his feet, with a shot selection that's second to none and a tone that finally does justice to cinema's most iconic skyscraper-botherer. Could it use more jokes? Maybe. But on balance, would you rather have a funny Godzilla movie, or a badass, shit-kicking, devastation-filled Godzilla movie? Either way, there's now a Godzilla for you.

More:  Godzilla  Gareth Edwards  Bryan Cranston  Elizabeth Olsen  Juliette Binoche
Follow us on Twitter @The_Shiznit for more fun features, film reviews and occasional commentary on what the best type of crisps are.
We are using Patreon to cover our hosting fees. So please consider chucking a few digital pennies our way by clicking on this link. Thanks!