I read Fight Club by Chuck Palahniuk. I read Zodiac by Robert Graysmith. I read The Accidental Billionaires by Ben Mezrich. I read The Girl With The Dragon Tattoo by Stieg Larsson. I read Gone Girl by Gillian Flynn. All were at some point translated to the screen by David Fincher; only the latter felt undermined by its source material.


If you're one of the 8.5 million people who have read Flynn's page-turner - if you're anything like me, you consumed it voraciously like a hungry horse with its nose in a feedbag - you'll already know the movie's secrets: the thrills, the spills, the kills. By these terms alone, Gone Girl has to go down as one of David Fincher's least effective adaptations - it lives and dies on its twist: a sting that's dulled once you know it's coming. That's not to say it isn't in a league of its own when it comes to thrillers made for grown-ups, however - and if you haven't read the book, then strap yourselves in: marital problems have never been quite so entertaining. 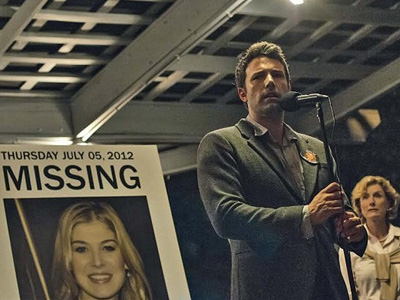 
My problems with Gone Girl mostly stem from Gillian Flynn's book - not because it's no good, because it's great, but because the structure of the story is perfectly suited to a novel, just not necessarily to the medium of film. Two voices, two narrators, alternating chapters: it works perfectly in print. While Fincher's adaptation does honour Flynn's original - she wrote the screenplay after all - the rigidity with which the narrative adheres to its source material borders on clumsiness. Gone Girl feels like an adaptation of a book; there is no flow to it, no answer to the question: 'Why did this need to be made into a movie?'

You may still be grateful it was. Gone Girl is by no means David Fincher's most visually striking movie, but it is one of his most mature: the jittery, hopped-up Fincher who threaded his camera through the handle of the coffee pot in Panic Room has become decaffeinated - a steady hand on the tiller. There are few flourishes (I'm hard pushed to think of one single standout moment that isn't ported from the book) but this dialled-down Fincher is happy to let his cast be the stars of the show for once.

Affleck, finally bulking out the rest of his body to match the ridiculous proportions of his chin, is marvellous as the schlubby Nick Dunne, the man whose wife mysteriously disappears on their fifth wedding anniversary. He nails that exquisite awkwardness one must feel when parading their grief for the media (particularly when that grief may not be entirely heartfelt), and Nick's struggle to appear sincere on camera is not too far removed from Affleck's own battle with being believable on film. Affleck as action hero is a Hollywood creation. But Affleck as oaf? Affleck as schmuck? Affleck as panicking murder suspect? I can buy that guy. 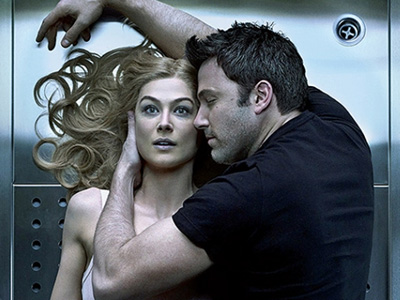 Affleck as a necrophiliac? Too far.


Rosamund Pike, on the other hand, is tremendous as Amy, the gone girl in question. She's a little stiff in her first flashbacks opposite Affleck - at first I thought she had been instructed not to make too much facial movement to maintain the illusion of digital de-ageing, but then I realised it was Pike playing Amy as a coiled spring. There's something serpentine about Amy in these scenes, something indefinable; it's a perfectly poised pretence, a wall erected expertly by Pike that validates the film's opening line by Affleck: "When I think of my wife, I picture cracking her lovely skull, unspooling her brains. Trying to get answers: What are you thinking? What are you feeling? What have we done to each other?"

If the movie's first half is a forensic dissection of a marriage that's as sharp, cold and intrusive as an autopsy, then Gone Girl's second half is when the coroners cut loose and start chucking organs and guts around for fun. Naturally it's impossible to detail what's so entertaining about it without revealing Gone Girl's trump card, but it goes without saying that as far as gear-shifts go, it's one of the better ones of late. It's here where Gone Girl flirts most brazenly with the idea of being a satire of a relationship drama, albeit an extreme one, but sadly, as in the book, Flynn's characters gradually slow into a sludgy stalemate; it's an ending that might work thematically but it doesn't really work theatrically.

I'm one of those awful people who read books when they know they're being adapted into films, so I can be that even more awful person who comes into the movie loaded with preconceptions and impossibly high standards. In the case of Gone Girl, that approach has backfired somewhat; if I could do it over again, I'd watch the film first and having doubtlessly enjoyed it considerably more going in cold, would seek the book out for the definitive version (there is back-story here that makes the movie infinitely more interesting). That's absolutely the right way to enjoy Gone Girl, and if you choose to experience it that way, you can probably add a star to my rating. Still, I retain my right to feel superior because, y'know... I read the book first. (*punches self in smug face*)

More:  Gone Girl  Ben Affleck  Rosamund Pike  David Fincher
Follow us on Twitter @The_Shiznit for more fun features, film reviews and occasional commentary on what the best type of crisps are.
We are using Patreon to cover our hosting fees. So please consider chucking a few digital pennies our way by clicking on this link. Thanks!