Honestly, I question whether anyone involved is really taking Haywire completely seriously. This is Steven Soderbergh in experimentation mode; an auteur director making a stripped-down, amped-up action movie, just to see if he can. It features a stellar cast, all of whom are slumming it to some degree, except of course for MMA fighter and lead actress Gina Carano, whose best is – in the nicest way possible – still some way beneath everyone else's. I'd recommend you approach Haywire with a similar air of detachment – expect nothing less than a slick, short, snappy revenge flick and you won't be disappointed.


Despite its punch-first, make-witty-reports-later subject matter, there are a couple of clues that this is a Steven Soderbergh movie. That familiar looking italicised location ident, for starters. A slinky David Holmes score for another. And then there's the plot, which seems needlessly complex and overwrought for what is essential a cruise missile of a movie: light Gina Carano's fuse, aim at target and stand well back. You may be overwhelmed by the sheer breadth of exposition in Haywire's establishing scenes: a government department lending a private contractor to an overseas agency to perform a hostage extraction is basically a fancy way of setting up Mallory Kane's IMPENDING ASS-KICKING FESTIVAL. 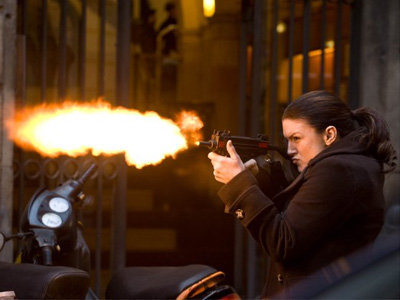 "Dawww… look at the ickle gunWWWAAARRRRGHHHH!"


What Gina Carano lacks in range and charisma (our mate @giruaro described her monotone performance as "like listening to the Google Translate lady"), she more than makes up for in physical presence. Lady can FIGHT. Heads are slammed into walls and cabinets; arms are broken and ankles are dislocated; when Mallory lands her trademark roundhouse kick to the head, it LANDS. Everything feels like it has a real weight to it; Haywire might be the first action movie I've ever seen in which a character is thrown onto a coffee table and it doesn't break.

That realism extends to the chase sequences too – lung-busting pursuits that should come with a rapidly decreasing 'oxygen indicator' on screen. The best scene in the movie sees Mallory making an escape through a Dublin hotel complex, then clambering along the city rooftops – not because she skips nimbly from building to building like some insane Parkour junkie, but because she does it at regular human speed. At one point, she loses her grip, falls and lands on her back – not because the script dictates she must be captured, but to show that she's only human.

Elsewhere, the rest of the cast are on autopilot, albeit the good kind of autopilot that doesn't crash planes. Antonio Banderas is on imperious, beard-scratching form as a shady villain; Michael Douglas has quiet dignity as a government head honcho; Bill Paxton is reunited with his True Lies moustache as Mallory's dad. Most secondary characters can be summarised with a two-word description (Michael Angarano = exposition sponge; Michael Fassbender = posh shithead), except for maybe Ewan McGregor's agency weasel Kenneth, the double-crossing ass who's fond of stabbing backs. "Take the job… It's basically a paid holiday," he tells Mallory, but he might as well have been talking to his cast members. 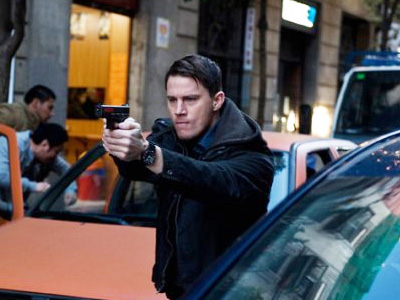 
Haywire rips along at a fair old pace, crunches all the right bones and is capable of drawing sharp intakes of breath during the fantastic fight scenes, so in that regard, Steven Soderbergh can call it a success. On the other hand, if this movie was released with Steven Seagal in the starring role, you would have never, ever heard of it.

More:  Haywire  Steven Soderbergh  Gina Carano  Ewan McGregor  Channing Tatum  Antonio Banderas  Michael Fassbender  Michael Douglas  Bill Paxton
Follow us on Twitter @The_Shiznit for more fun features, film reviews and occasional commentary on what the best type of crisps are.
We are using Patreon to cover our hosting fees. So please consider chucking a few digital pennies our way by clicking on this link. Thanks!