No one can deny that Psycho is one of the most groundbreaking, evocative horror movies ever made, so just think of the exciting story behind the business decisions involved in filming it. All that dramatic paperwork, all those engrossing lighting set-ups, the thrilling process of rewriting script drafts. And imagine that incredible, never-saw-it-coming twist ending when the movie definitely gets made.


All hilarious sarcasm aside, the idea of making a film about the making of a film seems presumptuous. Just because Psycho holds a legendary status in cinema history doesn’t mean that the story behind it is worthy of its own big-screen outing. In fact, as it turns out, despite some high-stake risks and extra-marital concerns, the behind-the-scenes story of Psycho is probably just as mundane as the behind-the scenes story of, say, Marley And Me. Except with less puppies running around being all cute and mischievous. So, really, who wins?

Of course, Hitchcock isn't just about the making of Psycho, but the man behind it. And this film follows in that great tradition of the one they call The Master Of Suspense by... well not really giving anything away. Anthony Hopkins plays the great director, presented here as a dissatisfied auteur, utterly restless unless he has an exciting project to sink his big wobbly jowls into. When the prospect of Psycho comes up – the film version of a book about serial killer Ed Gein – Hitchcock spies an opportunity to create something truly shocking. But, when the studios refuse to back such a film, he is forced to front his own money to get it made, much at the reluctance of his wife and key collaborator, Alma (Mirren). Things get worse when, with Alma lured away to work on a different script, marital tensions unfold and a jealous Hitchcock starts to suspect his wife of having an affair.

My god, that plot synopsis is misleading: affairs, jealousy, financial sacrifice, serial killers. The truth is, that this is a film in which the pace is glacial, the acting is melodramatic and the story is severely lacking. It might seem like there is a lot going on, but all we mostly get to see is the sad, silent contemplation of an old, weary, prosthetically constructed man. 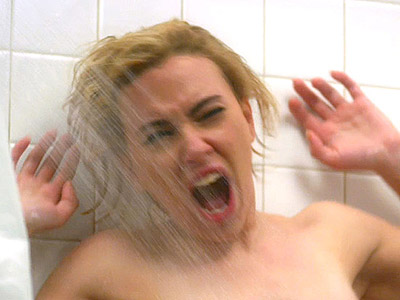 
Now, I'm no Hitchcockian expert. I don’t even know if 'Hitchcockian' is a recognised term. It probably is. But, anyway, Hopkins' portrayal of the director is frustratingly one note. Every syllable of dialogue drools out in a monotone over his rubber chin, no matter how angry, hurt or quick-witted he is being. I have no doubt that Hopkins went to great pains to make sure that his performance was accurate and what we are seeing is extremely close to how Hitchcock spoke and behaved in real-life. But it is a tedious performance to watch all the same.

Even more exasperating is the fact that Hitchcock is well-known to have a shrewd sense of humour, but despite some drawn-out barbed observations spoken in the same constant drone as everything else and one heartening prank played on Psycho star Janet Leigh, we don't ever get that impression. There's never a twinkle in his eye, or a cheeky smile. Just the same dead-faced look of a man that might as well be suffering from dementia.

Director Sacha Gervasi does at least inject some Hitchcockian (I'm sticking with it) flights of fancy to his film. A fourth-wall-breaking framing device neatly adds some much needed quirk, as does a couple of hallucinated conversations with Norman Bates inspiration Ed Gein. However, overall, these are all too few and infrequently placed in a film that is otherwise just a run-of-the-mill melodrama. 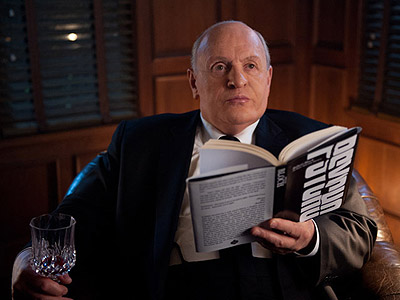 
The film certainly hints at more interesting aspects of Hitchcock's character – his occasional misconduct as a peeping tom, his roving eye for his leading ladies at the neglect of his wife, his often childish tantrums, his cunning marketing for this 'unsellable' movie – but they are all made peripheral to the story of his marital issues and the making of a film that doesn't ever really seem in danger of not getting made.

A triumphant finale and an admittedly great last line leaves Hitchcock on an undeserved high, but ultimately this is a film that doesn't learn anything from the man's own work. The slow tension is certainly present, but even the great director himself knew you had to slip in the thrill of a shower scene or a jabbing knife every now and then to keep people interested.

More:  Hitchcock  Sacha Gervasi  Anthony Hopkins  Helen Mirren
Follow us on Twitter @The_Shiznit for more fun features, film reviews and occasional commentary on what the best type of crisps are.
We are using Patreon to cover our hosting fees. So please consider chucking a few digital pennies our way by clicking on this link. Thanks!