Nobody expected a sequel to Horrible Bosses - least of all the people who made it. However, a $200 million box-office receipt was too big to ignore, so Jason Bateman, Charlie Day and Jason Sudeikis are back with their horrible bosses (that aren't even really their bosses) along for the paycheque. There's a palpable sense here of making hay while the sun shines: some might see Horrible Bosses 2 as the most cynical of sequels, but just as the hapless characters wing their way through each step of their terrible, ill-thought-out plan with a wink and a smile, so do the filmmakers, making sure we know they're having fun while doing so. That kind of infectious goofiness can't be faked, thus Horrible Bosses 2 is a very easy movie to enjoy.


In truth, Horrible Bosses 2 is more a string of funny scenes loosely assembled into a film than a proper, fully functional sequel. The shooting style, as in the first film, is to point the camera at the three leads and let them waffle; given free rein to ramble and riff, Bateman et al provide more hits than they do misses (you suspect the DVD will need a second disc for all the line-o-ramas). Crucially, because the principle cast members are all naturally funny, the easy chemistry cooked up in the last movie is improved upon here: it's a comedy made up of moments, the most amusing of which are usually improvisations between plot points (one extended riff on the movie Predator had me giggling uncontrollably). 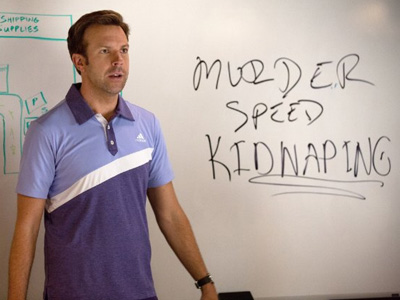 
Yes, the characters are one-note: Day is loud and irritable, Bateman is permanently exasperated and Sudeikis is a horndog. Character development is purposely non-existent: they learn nothing and nor should they - there is no small amount of pleasure in watching dummies be dummies. Jason Bateman has been playing this role his entire life, but - and stop me if I'm overthinking this - there's an element of Oliver Hardy-esque pathos to his character here: Sudeikis and Day are his Stan Laurel, bumbling ninnies both of them, but Bateman is the smartest guy in a room full of idiots - or maybe he's the stupidest one of all for continuing to associate with them. There's a fun scene early on where Bateman plays lookout while his colleagues are rumbled breaking into an office; he considers leaving the scene before sighing a heavy sigh and saying: "No, I can't do that... They'd only tell on me."

Christoph Waltz and Chris Pine make for energetic new additions as the father-son big business douchebags who screw over our Beleagured Employees and leave them out of pocket. Pine provides a welcome jolt of energy as a cut-price Patrick Bateman assclown; I daresay that during a scene in which Pine beats himself up while laughing his ass off ("He's Fight Club-ing himself! We got a Fight Clubber!"), a Warner executive somewhere thought they'd found their Joker. I shuddered at that thought, then remembered crazy Chris Pine in Smokin' Aces, then thought, hmmm. 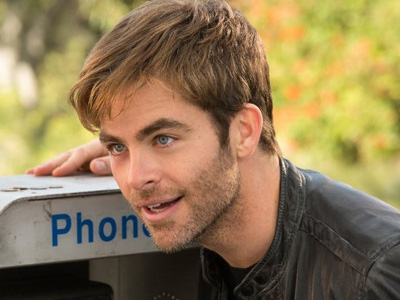 
Chris and Christoph feel like vital additions, because the reprisals of Jennifer Aniston's sex addict (now a grotesque caricature of a sexual predator) and Kevin Spacey's um, horrible boss (now a ranting lunatic), are totally unnecessary. I get why, as popular characters from the first movie, they had to return (and it never hurts to have Jennifer Aniston in a bra in your trailer, as per her contract requirements), but they're blatantly surplus to requirements to this story, shoehorned in as little more than cameos.

Look. Let's not get hung up on marketing or Hollywood politics or Jennifer Aniston's weird new cat lady face. Horrible Bosses 2 is only in the business of making you laugh, and it does so by consistently and hilariously subverting the tropes of kidnap movies, undercutting all possible tension with well-timed gags and observations. There's a great visual gag (which I'm about to spoil) which sees Bateman and Day, having broken into Chris Pine's house, poke their head cautiously around a corner only for Sudeikis to walk obliviously into the shot behind them. There's a gag about a marker pen that slayed me. There's a brilliant bit during a car chase that will completely catch you off guard. At every step, Horrible Bosses 2 is aware of how ludicrous it is; you can relax while watching a movie that's serious about its silliness and vice versa.

No one is winning awards for this screenplay. No one here is labouring under the intention of producing high art. This is a movie that knows it shouldn't really exist, but damn it, it might as well have fun if it must. Despite talk of kidnap and murder and extortion, Horrible Bosses 2 is a fundamentally good-natured movie with an easy charm, centred on three guys who remain friends to the end - compared to the corrosive characters of the increasingly bilious Hangover movies, they're salt of the Earth types. Get cosy in their company: they're no doubt now well positioned to become the stars of a most unlikely comedy trilogy.

More:  Horrible Bosses  Horrible Bosses 2  Sean Anders  Jason Bateman  Charlie Day  Jason Sudeikis  Jennifer Aniston  Chris Pine  Christoph Waltz
Follow us on Twitter @The_Shiznit for more fun features, film reviews and occasional commentary on what the best type of crisps are.
We are using Patreon to cover our hosting fees. So please consider chucking a few digital pennies our way by clicking on this link. Thanks!