Hunt For The Wilderpeople

Forget America and Great Britain: the real special relationship the UK has is with Oceania. I've always felt closer to my Australian and Kiwi brothers than I have our American chums, and I think self-deprecation plays a big part in that. Our friends from across the Atlantic often struggle to laugh at themselves, but our friends in the Pacific have a healthy appreciation of self-mockery; the New Zealander sense of humour feels far more aligned with our own. Perhaps this is why Taika Waititi's comedy Hunt For The Wilderpeople feels so comfortingly familiar: it's an inward-looking comedy that's not afraid to poke fun at its country's own foibles but still manages to feel like a celebration of life on a little island.


The special relationship here is between wayward kid Ricky (Julian Dennison) and adoptive father and bushman Hec (Sam Neill), who is left holding the very large baby after a family tragedy. Distraught, Ricky runs away into the nearby bush, but the pair are forced to survive off the land when an amusing child abuse mix-up (trust me) has child welfare officer Paula Wall (Rachel House) hunting them like prey ("I'm the Terminator, you're Sarah Connor," she brags, "from the first movie before she did all them chin-ups"). There are actually precious few quote-unquote jokes delivered here: comedy is embedded firmly in character, with each actor often eliciting laughs with nothing more than mannerisms.

Predictably, Sam Neill is on fantastic form, sort of like an evolved version of Alan Grant (a survival expert who's allergic to children) who remains unflappable at all times. His beard - an all-timer, if you're into your movie beards - hides a reservoir of emotion that's buried deep down: save for one rattling, primordial howl, Hec is a closed book, so watching him slowly warm to Ricky is a delight which Waititi teases throughout the movie. For his part, Julian Dennison is a great find and a fine foil for Neill - not many kids could do deadpan quite so well, and he is his older co-star's equal in scenes both sweet and serious. 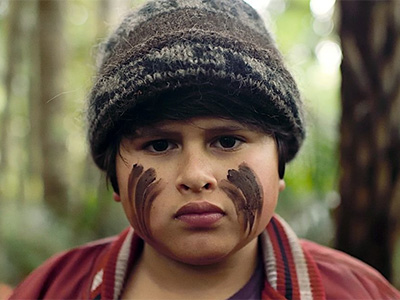 I would adopt the shit out of this kid.


There's not too much in the way of emotional heavy lifting, really; Hunt For The Wilderpeople is light and full of laughs, but it has a beating heart that's practically palpable and the awe and wonder is left to the stunning New Zealand scenery (and yes, even movie characters from New Zealand can't help but make Lord Of The Rings observations). There are a few precious moments - an absent hot water bottle is a particular chin wobbler - but it's balanced out with absurdist humour and comic cameos (Waititi's prattling priest is preferable to Rhys Darby's bush-dwelling nutcase, but both are welcome additions).

All of which adds up to one of the funniest movies of the year so far, featuring a rogues' gallery of comic caricatures (Paula Wall is crying out for her own fly-on-the-wall docusoap) and a neat line in smart gags where the punchlines aren't even needed. "What's your dog's name?" asks Ricky. "Zag," grunts Heck. "You should get another one and call it Zig," says Ricky, blithely. Sam Neill's stony expression is hilarious no matter what island you hail from.

More:  Hunt For The Wilderpeople  Taika Waititi  Sam Neill  Julian Dennison  New Zealand
Follow us on Twitter @The_Shiznit for more fun features, film reviews and occasional commentary on what the best type of crisps are.
We are using Patreon to cover our hosting fees. So please consider chucking a few digital pennies our way by clicking on this link. Thanks!