Bill Murray is great, isn't he? Is there any other person in the world with whom you'd rather have a chance encounter? He's like a mischievous uncle that you'd want to hang out with all the time; you could have a laugh and be sarcastic and pull funny faces. And then you'd introduce him to your friends because he's so cool and he'd get on with them too, sometimes even meeting them when you're not there and he'd probably make fun of you then and they'd laugh because they all like him better than you anyway and... actually, that would be awful. Fuck Bill Murray. That mad, magnificent bastard.


The fact that Murray manages to straddle that line between foolish irresponsibility and charming likability is at least suited to his role as President Franklin D. Roosevelt here (SEGUE ALERT). As the playful, wheelchair-bound head of state, Murray gives a rare understated performance informed by composed social status, but with an obvious cheekiness trying to break through. He makes for a charismatic, incorrigible figurehead who somehow manages to remain perfectly affable, despite how often it seems he tests those around him.

And yet 'perfectly affable' is all you get with this film. Telling the story of how Laura Linney's Daisy became FDR's mistress (despite being his fifth cousin) at a time that he is set to meet King George VI (Samuel West) - or Bertie (the very same) - and Queen Elizabeth (Olivia Colman) on their first trip to America, this is a film concerned with social airs and graces... and not much else. We are treated to countrysides and silverware and plenty of laughs derived from the difference between the stuck-up British royals and Roosevelt's own mischievous sense of humour and it's all so... pleasant. And nice. But never fully captivating. 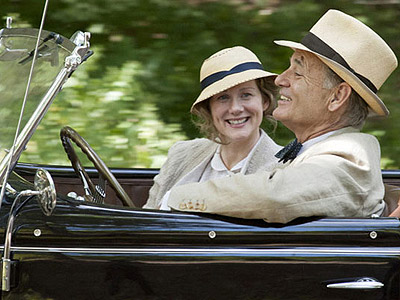 Ha ha ha! We don't even know where we're going.


Even Murray, who never fails to be the most watchable actor in any film, can't prevent Hyde Park On Hudson from being too insipid. The split focus between Roosevelt's affair and his all-important meet with the British monarch means that the film never really feels fully invested in either plot. And this is probably for the best anyway because neither one seems to have much weight to it.

And yet, we still have a collection of enjoyably watchable performances here. Murray may take centre stage, but it's actually Olivia Colman and Samuel West who get the best individual moments. As the disapproving queen trying to fathom their host and the stuttering king trying to placate her, the pair provide a hilarious insight into married life as a royal as well as some choice observations about FDR's eccentric behaviour. 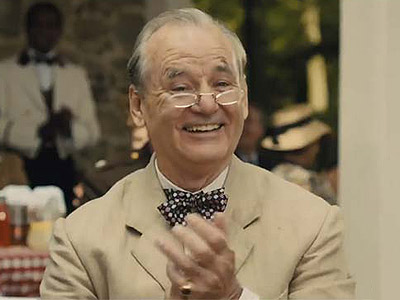 
And yet the sharp dialogue in these scenes doesn't carry across to the rest of the film. Instead, the script seems to take the scenic route through this important historical time, giving rise to only the occasional flicker of interest. What's more, people may go to see this film for Bill Murray, but they'll leave with an even greater appreciation for Colman and West. Take that, you brilliantly awesome fool.

More:  Hyde Park On Hudson  Bill Murray  Laura Linney  Roger Michell
Follow us on Twitter @The_Shiznit for more fun features, film reviews and occasional commentary on what the best type of crisps are.
We are using Patreon to cover our hosting fees. So please consider chucking a few digital pennies our way by clicking on this link. Thanks!