We've all seen the list of Pixar's story concepts throughout the years, right? 1995: What if toys had feelings, 1998: What if bugs had feelings, etc until we get to the Inside Out punchline: What if feelings had feelings? It's an apt joke, not just because you can imagine that this formula for success was actually decided years ago in a boardroom somewhere, but because Inside Out really does feel like the ultimate Pixar film. In terms of fun, emotion, gags and - yes - cries, Inside Out meets the very best of what the studio has done to date, and it does so within a simple, lovable realisation of an incredibly complicated abstract concept. This really is Pinnacle Pixar.


It's hard to write about this film and resist the temptation to just list a bunch of superlatives. It is, after all, the sweetest, saddest, happiest, powerful-est, imaginative-est and most important-est film of Pixar's output to date. It's a horribly melodramatic point to make but, in a very real sense, Inside Out is life-changing. Maybe not for the most cynical and jaded of viewers, but for everyone else - kids and grown-ups alike - it teaches an important life lesson that feels like it unlocks the very secret to happiness itself.

In depicting the conflicting emotions of 11-year-old Riley, torn away from her home town and friends while already on the verge of adolescence, we have a set-up that is hardly enticing: the resentful sulking of a frustrated almost-teenager. It sounds like it automatically comes with a soundtrack by Dashboard Confessional.

But we have a dual narrative here and all focus is on the inner workings of Riley's mind. After establishing that five emotions - Sadness, Fear, Disgust, Anger and leader Joy - are in charge of the controls, Joy and her natural opposite Sadness (a blue, and very blue, emotion who often gets deliberately sidelined by Joy) are cast astray in the wider arena of Riley's consciousness. 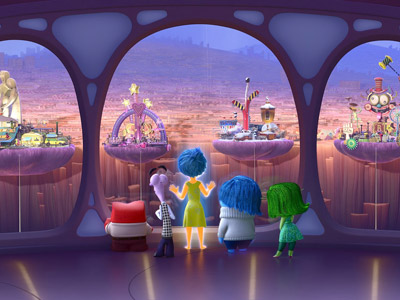 And there's these things. I'm not even going to try to explain.


The opposing emotions have to get back to the control centre while Riley suffers the mood swings of an upset young girl thanks to being at the mercy of those Feelings left in charge. And so begins an odyssey through her psyche, traversing such wonderfully rendered obstacles as a library of memory banks, Imagination Land and an imaginary friend called Bing Bong, who is so unbearably tragi-cute that you'll immediately try desperately to conjure him up yourself after the film ends just to attempt an intangible hug.

Sounds like there's a little more metaphorical existentialism contained here than in your average cartoon movie, eh? And if anything, that's really the only criticism anyone can level at Inside Out. During a short sequence in which Joy, Sadness and Bing Bong travel through the Abstract Thought building complex and are deconstructed of all shape and dimension, it's hard to imagine how any kid without a degree in neuroscience could possibly be following what's happening on screen.

But then, what do I know? Kids are dumb. They probably only care about bright colours and funny noises until the age of 16 anyway so literally who gives a shit about them. BING BONG! 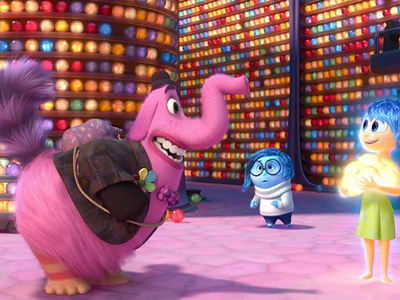 
The fact is that Pixar has a history of overcoming the toughest of story sells to deliver incredible films. A silent movie about a single robot in space? Pfft, it will never work. A lonely old man grieving the death of his wife? Who would want to see that? A THIRD Toy Story film? Why ruin the franchise? And now, in Inside Out, we have an impossibly difficult concept that is just realised to perfection by Pixar. It not only gives us top quality entertainment, but also constructs wonderfully original visuals to represent the workings of the mind and provides breath-taking insight into the very idea of happiness.

It's almost a shame that Pixar are set to release The Good Dinosaur later this year (as good as that looks) because, truth be told, Inside Out could have been a glorious swan song to retire on. I know the same thing has been said in the past, but this time it really seems true: it's impossible to see how Pixar can get any better than this.

More:  Inside Out  Pixar  Pete Docter  Amy Poehler  Phyllis Smith  Bill Hader  Lewis Black  Mindy Kaling  Richard Kind
Follow us on Twitter @The_Shiznit for more fun features, film reviews and occasional commentary on what the best type of crisps are.
We are using Patreon to cover our hosting fees. So please consider chucking a few digital pennies our way by clicking on this link. Thanks!