As long as Christopher Nolan continues to exist, do we really need Steven Spielberg any more? Ol' King Noles is doing a darn fine job of delivering mega-bucks events movies with small and personal stories at the core; gigantic, universe-expanding motion pictures anchored by daddy issues, the kind which Beardo used to smash out on a regular basis. Interstellar is the latest Chris Nolan project to take a leaf out of Spielberg's playbook - once upon a time it was a Steven Spielberg project after all - and it bears the hallmarks of both directors: it's an ambitious, challenging sci-fi that takes one small step for blockbuster cinema but ultimately remains accessible to all. All the talk of Kubrick and 2001 is light years off the mark: Interstellar is the kind of space odyssey that has only shameless, monolothic entertainment on the agenda.


The set-up is divine in its mundanity: Earth is under threat, not from asteroids or tsunamis or alien robots riding alien dinosaurs, but from regular, run-of-the-mill, dirt. Giant dust clouds clog the gears of humanity's well-oiled machine; before long, the planet is covered in a thin sheen of crud, with food supplies drying up and all Twinkie vans presumably ransacked decades prior. Humanity is literally choking on its own death rattle. This concept is quaintly introduced right at the start of the movie in the form of a pseudo-documentary and is fascinating right down to the routines of the townsfolk as they lay the table for dinner. This is as detail-oriented as Christopher Nolan gets: from here on in, the camera pulls out, the picture is bigger, the canvas more sweeping, the themes universal.

Matthew McConaughey plays former pilot turned farmer Randy Quaid in Independence Day Cooper, who - along with his daughter Murph (Mackenzie Foy) - follows a scientifically questionable plot device to stumble into the remains of NASA. There, Michael Caine's sage industrialist billionaire has a spaceship ready on the landing pad waiting to take the McConnaissance into outer space. The mission? To travel through a conveniently placed wormhole and find a less shitty home planet in a new solar system. The catch? NASA couldn't afford a return ticket. 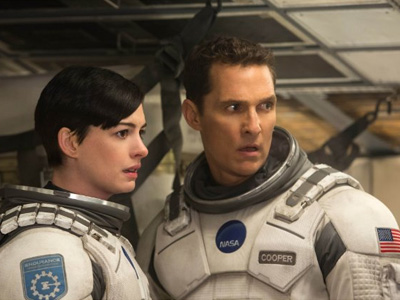 Imagine being stuck in space with Anne Hathaway.


Composer Hans Zimmer provides yet another fierce and dominating score, but the first instrument you hear being plucked is your own heartstrings (oof, that's terrible) as Nolan wrenches apart father and daughter in order to save the planet. Murph's understandably pained reaction to her daddy's abandonment is a splinter that Cooper carries with him through time and space. After one particularly wasteful temporal encounter, Coop binge-watches an entire lifetime of video messages from his family; Nolan's camera fixes on McConaughey, his face contorted into every emotion at once. Sure, it amounts to the director playing the world's largest tiny violin, but the connection between Coop and Murph never feels like emotional exploitation: you're not given a chance to forget the humanity at stake.

There exists in Interstellar an awkward friction between the relationship of hard science and lovey-dovey stuff, but it is crucial that the movie features both. Even the film's worst scene, in which Anne Hathaway's astro-boffin Brand argues the case that love is a quantifiable method of science, gives Interstellar shades beyond your average sci-fi stargazer. Space travel is easy but making the men and women on the mission feel human is not. Herein lies Interstellar's inherent 'Spielberginess': an insistence on keeping things relatable and intimate even when dealing with the fate of all mankind. Such emotional attachment gives Interstellar weight even in zero gravity; without it, you're left with Homer Simpson's NASA crewmates ("They're a colourful bunch... There's a mathematician, a different kind of mathematician, and a statistician!").

Kubrick would scoff at some of Nolan's sob-wrangling, but 2001 is not a healthy comparison for Interstellar - it's actually in the same orbit as Robert Zemeckis' Contact, a movie with which it not only shares its star, but also its scientific advisor Kip Thorne (aka Mr Wormhole) and its penchant for third act lunacy. Like all good science fiction, Interstellar goes to great lengths to establish rules and boundaries within which you can trust, until it abandons the rule book at the two hour mark when the film's scientific backbone snaps under duress and Nolan's heart starts ruling his head. But it would be remiss of me to find fault in a finale that shoots for the moon and aims to explore uncharted territory. Interstellar's final flight of fancy feels like a suitably giant leap for a movie with such grand ambitions. Go with it. 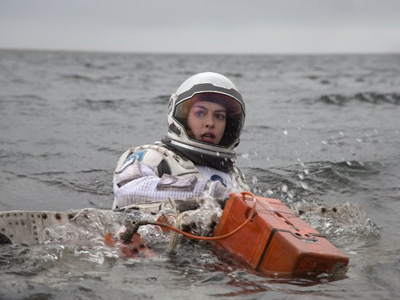 Before you become a spacetronaut, you have to become a swimtronaut.


It's not without its wobbles. There's a large portion of the second act that feels sutured in from another movie (Sunshine, basically) and a big mid-movie celebrity character reveal that's laughably lampshaded in the opening scenes at NASA ("He's the most brilliant scientific mind of his generation," says Hathaway as she points to a tiny, out-of-focus photo on the other side of the room; he's even revealed by a slow-release zipper, giving you plenty of time to place your bets). A-list distractions aside, this section of Interstellar feels redundant from the start - you can practically hear the mission going tits up. For a movie so obsessed with the passing of time, it's not short on obvious candidates for the cutting room floor.

Interstellar is a movie of contradiction: it makes boring stuff seem fascinating (see: docking, dust, baseball) while making the fantastical seem reasonable, perhaps even drab. There are no Avatar-esque jungle planets or alien beings among the stars, just practical, potentially habitable homeworlds, exquisitely under-designed by production designer Nathan Crowley and beautifully captured by DP Hoyte Van Hoytema. It's a straight-up science movie until it isn't. It's unshowy until it parachutes SECRET UNNAMED MEGASTAR right into the middle of the movie. But as a sprawling epic that aims high and asks bigger questions than most, Interstellar works through a combination of Christopher Nolan's confidence, Matthew McConaughey's chops and your willingness to let science and Spielberginess co-exist.

More:  Interstellar  Christopher Nolan  Matthew McConaughey  Anne Hathaway  Jessica Chastain  Michael Caine
Follow us on Twitter @The_Shiznit for more fun features, film reviews and occasional commentary on what the best type of crisps are.
We are using Patreon to cover our hosting fees. So please consider chucking a few digital pennies our way by clicking on this link. Thanks!