Unless you toss a few sharks into the mix, or have Bill Paxton chasing them down, it’s tough to get people riled up about a tornado. No, what people want these days are several of the windy buggers, scary-as-hell firenados, entire towns flattened, confused shaky cams, people scrambling for phone signal and a pair of drunken thrill-seeking hillbillies with a GoPro looking for YouTube hits.


Yep, Into The Storm is just Twister for the Twitter generation. And if it wasn’t for that half-arsed shaky cam and characters as flimsy as that barn blowing away, I’d be telling you that "Into The Storm is a solid throwback to the good ol’ natural disaster movies of the 90s". Instead, I'm sitting here struggling to come up with a witty joke using the words 'sucks' and 'blows'.

As the world's worst storm tears the idyllic mid-west town of Silverton a new one, we’re left in the company of the unlucky few stuck out in the rain without brollies or raincoats. Local school Vice Principal Gary Morris (Richard 'Thorin Oakenshield' Armitage) tries desperately to keep his two teenage sons Donnie and Trey safe, meanwhile a group of storm-chasing filmmakers in their weather-proof truck are on the hunt for that perfect shot. And there are some rednecks who just dick about in the rain. We're all unsure of their purpose. 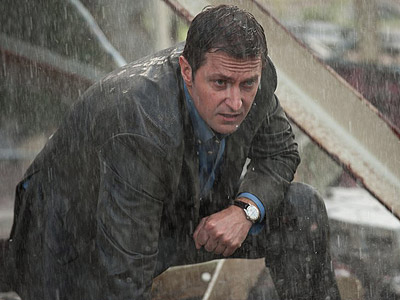 
Into The Storm works its way steadily through all the usual disaster movie clichés. Armitage, sporting a distractingly deep American accent, is a tough no-nonsense single father struggling to connect with his boys, one of whom predictably gets trapped with the girl he fancies. Elsewhere Veep regular Matt Walsh plays the selfish storm fanatic who later grows a conscience while one of his new colleagues - who we’re told has a beautiful girlfriend and a whole future planned out -gets himself into a whole heap of trouble.

Thankfully, as shit kicks off and the wind picks up, the forgettable characters are quite literally blown out of the way by some exhilarating action scenes and thrilling special effects. While Twister had its fun with some helpless flying cattle, Into The Storm takes it further. Watching a super tornado rip its way across an airport, lifting jumbo jets off the ground and hurling them about like paper planes will leave you gobsmacked.

We do get some respite from the carnage though. There’s one brief moment of calm sun-drenched beauty as we’re picked up by the tornado, only to come crashing back down to earth seconds later in spectacular fashion. A scene that'll leave you windswept and shaken. 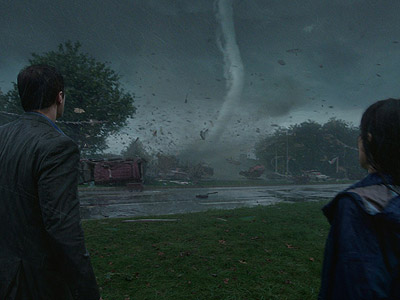 
Sadly, the erratic use of that shaky cam spoils the occasion. The creaky found footage gimmick is fine if it’s used effectively and the filmmaker fully commits to it. But director Steven Quale can’t seem to decide whether he wants an amateurish-looking film or a balls-out old school disaster movie. In the end we get the worst of both; we’re left with characters recording simply for the sake of keeping the film going while also wondering who’s meant to be shooting those expensive-looking aerial shots.

But with the storm over within a brisk 90 minutes and the top-of-the-range sound design doing a fine job at keeping you in the moment, you could almost forgive the film’s clumsy script, laughable dialogue, dull characters and glaring plot holes. Hell, there's no need to question why a fleet of school buses carrying teachers and students simply goes missing. Just go with it.

Into The Storm might not reinvent the disaster movie, but if you’re willing to leave your intelligence at home and not ask too many questions there’s just enough here to pleasantly suck you in.

More:  Into The Storm  Richard Armitage  Steven Quale  Matt Walsh  Sarah Wayne Callies  Matt Deacon  Nathen Kress  Scott Lawrence  Alycia Debnam Carey
Follow us on Twitter @The_Shiznit for more fun features, film reviews and occasional commentary on what the best type of crisps are.
We are using Patreon to cover our hosting fees. So please consider chucking a few digital pennies our way by clicking on this link. Thanks!