"Directed by the stunt coordinator of After Earth, here is a story about an implausibly named man who goes on a revenge rampage after criminals kill his dog. Starring The Lake House's Keanu Reeves." As sells go, this really could have gone either way.


After all, it's easy to imagine this movie as a cheap and trashy actioner. A straight-to-DVD effort in which the villain speaks in Russian gangster clichés and our hero introduces himself at the start of a fight by saying "Now you're really getting on my wick. JOHN Wick."

Thankfully - and against all odds - this film has gone the other way, becoming the boldest and ballsiest shoot 'em up film released in years. With a simple premise, a built-in mythology and so many brutal headshot kills that you have to wonder whether John Wick's entire training has been spent mastering Call Of Duty, this film delivers more than just 101 minutes of intense action, it provides the makings of a welcome, fresh franchise. 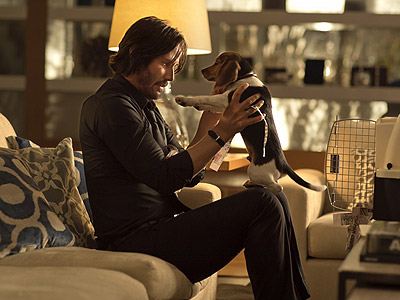 
Many will regard it as something of a return to form for Keanu Reeves and it is fair to think of it as such, but only because - crucially - he isn't required to actually act that far out of his comfort zone. As a former hitman grieving his wife's death, Wick is a man who is emotionally closed-off. And then, when Russian thugs break into his house to steal his sweet ride, beating him up in the process and killing the puppy that his wife bought for him from beyond the grave, Wick reverts back to his old ways of being a stone-cold killer. Either way, we win because Reeves is required to do little emoting other than the odd sob early on.

In fact, it's telling that the few moments where eyebrows get raised are when the film seems to be taking itself too seriously, and these usually occur when Wick gets really angry and Reeves ends up rage-growling like Bale's Batman trying to make himself actually breathe fire.

More to the point though, directors Chad Stahelski and David Leitch (the latter going uncredited thanks to a DGA dispute) know how to stage awesome action set-pieces, which happily make up about 80% of the film. With more than 20 years’ worth of movie stunt work under each of their career belts, Stahelski and Leitch clearly know how to make the best of their bullet-ridden beats, delivering slick, fast-paced scenes of well-composed killer chaos. 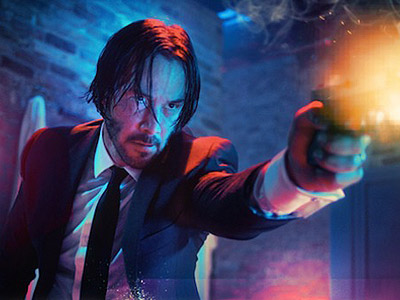 Complete with lovely, pretty coloured lights and everything.


All of this makes for a perfectly serviceable revenge thriller, a Death Wish throwback to a genre that feels decades old but, just to go that extra mile, John Wick is brought up to date with a key element needed for any film to be successful in this day and age: it feels like a comic-book adaptation.

As the film progresses, it is established that, not only does John Wick have a near-superpowered level of proficiency when it comes to killing people, but there is an entire network of hitmen and hitwomen, who abide by an established code of honour, deal in a special currency and even have their own safe haven – a hotel managed by the unshakeable Lance Reddick who caters for his guests’ needs with poise and composure. It’s not until you reach past the halfway point of the film that you realise this is yet another movie that has created its own universe to explore, a heightened reality with lots of potential for future sequels.

All of which may make you roll your eyes. After all, who needs another franchise with another ‘verse to be wrung dry? It’s hard to complain though when John Wick is such a compact, punchy film without an ounce of flab on it. In this first movie of a mooted trilogy, there’s no room for oversaturation of the concept, or for padding out with crossover references and referrals. It’s just a short, sharp, bullet-driven bulldozer of a movie that snaps necks and blows out brains. And if that isn’t good enough for you, go rewatch The Lake House or something.

More:  John Wick  Keanu Reeves  Chad Stahelski  David Leitch  Michael Nyqvist  Alfie Allen  Willem Dafoe
Follow us on Twitter @The_Shiznit for more fun features, film reviews and occasional commentary on what the best type of crisps are.
We are using Patreon to cover our hosting fees. So please consider chucking a few digital pennies our way by clicking on this link. Thanks!