There’s no excuse for actively willing a film to fail, but sometimes it just seems written in the stars – when all the planets align for a colossal mess of galactic proportions – and, in that instance, all you can do is hope that the film is so ludicrous in its concept and execution that it becomes that rare creation: a film so unintentionally hilarious, it provides the funniest movie experience of the year. With Channing Tatum’s Spock ears and gravity roller skates, Eddie Redmayne playing a raspy villainous fopp and Sean Bean playing a half-man-half-bee (oh yes), it seemed that Jupiter Ascending couldn’t fail to fail.


Sadly – or happily, if you are a better person than I - this film doesn't live up to its potential to be this year's great big stupid movie joke because, well, it's all rather enjoyable. Intentionally enjoyable.

Don't be mistaken, the high-as-balls story-telling and the practically parodistic characterisation should have earned this film a place in the annals of Things That Cinema Made Wrong, alongside Battlefield Earth and Macaulay Culkin, but those that have been gunning for this film with giant laser rifles are missing an important point: the Wachowskis clearly know what they're doing. They know that they have created a great big silly beast of a film; they're just trying to have fun. Granted, it would be a lot easier to know that if the script allowed for some modicum of humour, or if nearly everyone in it didn't deliver their lines with the po-faced seriousness of someone who thinks that overblown sci-fi epics can be the new Shakespeare, but the Wachowskis are clearly on board with the idea that this just supposed to be entertainment. And entertainment it is. 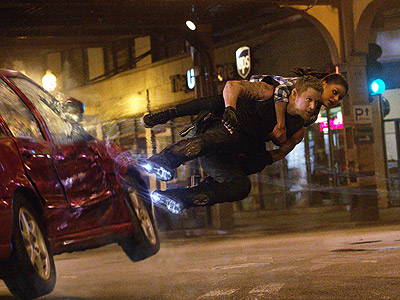 
Their big mistake, however, is that, in creating an entirely new universe of gene-spliced species and alien royal families, they have approached the story with the mindset of a comic-book fan, i.e. someone used to outlandish concepts where anything goes. This being a medium filled with things like talking raccoons, dancing trees and genetically modified sheep warriors, the Wachowskis have brought that sense of silliness to the big screen without any credentials and without stopping to think whether or not movie audiences will buy into it. And this is the real problem, because the only way you're going to have any fun here is if you strike up Channing Tatum's wolf ears and Sean Bean swearing like a bee ("beeswax!") to good old times and just go with it.

Sadly, that's made more difficult by the overly complex story. At its core, things are simple - this is a tale that follows familiar traditions of the kind of centuries-old mythology that informs all the best sci-fi. Mila Kunis plays Jupiter Jones, a lowly cleaner, desperate for cash, who hates her life, but by some genetic fluke she is also an intergalactic heir, an anomalous member of the royal family that govern the universe; in short, she's The One. However, amid the inadvertent space adventure that ensues, she discovers that Earth is one of many planets that are used solely for the purpose of slaughtering the population to make some kind of Soylent Green moisturiser that keeps high society young (making this the third film in an accidental 'human harvesting' trilogy for the Wachowskis, following The Matrix and Cloud Atlas).

So far, so Neo, but the problem lies in all the convoluted detailing, which overcomplicates the already ambitious concept of a cosmic destiny. By the time the Wachowskis have added Freudian family feelings, the type of tax and trade bureaucracy that made The Phantom Menace such a barrel of Jar Jars and an admittedly brilliant Brazil-esque sequence that lampoons over-administration (complete with Terry Gilliam cameo just to hammer the homage home), we are left barely able to keep up with the plot. If anything, for such a visually spectacular blockbuster, the Wachowskis would have been better off oversimplifying everything for the benefit of an audience who just want to see spaceships go boom. It's not hard to imagine that Jupiter Condescending would have been a lot easier to digest. 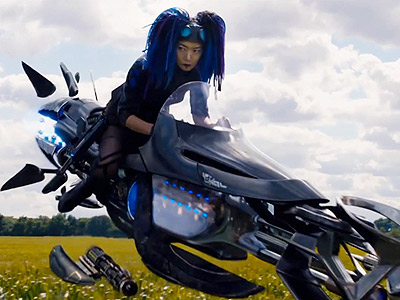 I don't even remember what happens to Doona Bae's character.


Just as it's hard to exactly follow where Jupiter is headed and why at any point during the movie, the film suffers from the same chaos in its many action sequences. While there's a level of inventiveness that applies here - some nifty action staging is impressively original, not to mention Tatum's AWESOME SPACE SKATES that allow him to glide through the air - there is often too much happening too quickly. With various spaceships flying through the air shooting at each other, while smaller vehicles zip in between them and Tatum himself swings around like someone who is enjoying the wire work far too much, it's almost like every element is being handled by a giant invisible toddler playing with his toys. That wouldn't necessarily be a bad thing as long as we got to see everything from the toddler's point of view, but more often than not, we have the perspective of the toy and frankly it's playtime mayhem.

On the other hand, there is still plenty to enjoy besides the flash-banginess of it all. Not least of which is Eddie Redmayne’s performance as Balem Abrasax, the soft-throated, fey prince who sounds exactly like Baron Greenback until sudden anger forces him to petulantly bark orders like a tyrannical tulip. There’ll be plenty that see this as a huge misstep for someone who is a favourite for this year’s Best Actor Oscar, but he does exactly what he is supposed to here – he gives the most ridiculously camp performance seen in a film for a long time and is all the brilliant for it. The fact that you’ll leave the cinema doing impressions of his voice is only to Redmayne’s credit, rather than to his disparagement. 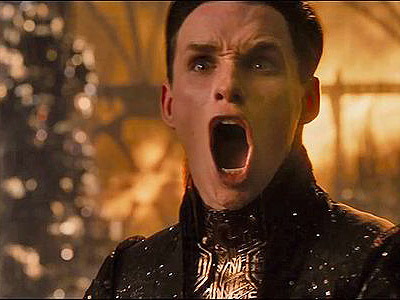 Although his 'gracious defeat' reaction needs work in time for the Oscars.


More than anything, Jupiter Ascending is a film that owes debts to a lot of sci-epics that have come before it, ranging from the excellent to the notoriously terrible. For example, the social hierarchy and costumes, not to mention the planet-mined substance, are reminiscent of Dune, while the dinosaur-like space cops will remind you of (*gulp*) Super Mario Bros. All in all, the cyberpunk aesthetic are lifted directly from most 90s sci fi movies’ vision of the future, but the often empty spectacle isn’t too far removed from The Chronicles Of Riddick either. Basically, while Jupiter Ascending is another Wachowski home-grown creation and something that should be applauded for sheer Hollywood-busting originality, it is also a film that feels very familiar, often for troublesome reasons.

Most importantly, though, it certainly isn’t the embarrassment that many want it to be. If anything, it’s worse. For all the fun to be had at the time, it’s ultimately rather forgettable.

More:  Jupiter Ascending  The Wachowskis  Mila Kunis  Channing Tatum  Eddie Redmayne
Follow us on Twitter @The_Shiznit for more fun features, film reviews and occasional commentary on what the best type of crisps are.
We are using Patreon to cover our hosting fees. So please consider chucking a few digital pennies our way by clicking on this link. Thanks!