There is no escaping the fact that I can't write an unbiased review of a Jurassic Park movie. Jurassic Park is my Star Wars, my Lord Of The Rings - my formative moviegoing experience that opened my eyes to the wonder of cinema. I can never be too down on movies about rampaging dinosaurs; even a bad Jurassic Park movie - and there have been more of them than there have been good ones - is entertaining in its own way. But by any measure, whether you're a super-fan or a casual observer, Jurassic World knocks it out of the park: it's a shamelessly entertaining blockbuster that simultaneously pays homage to the original while putting a fresh coat of paint on the formula. If you're a Jurassic Park fan, Jurassic World is everything you want it to be - I'd even go as far as saying it's as good a Jurassic Park film, post Jurassic Park, that you could ever possibly expect.


Often when an old franchise is resurrected for nostalgia points, you'll be told that the director is a "big fan" of the original and "just wanted to pay respect". Then you watch the movie and realise that was part of a calculated marketing ploy: appease nerds, get money. With Jurassic World, you get the sense that director Colin Trevorrow and exec producer Steven Spielberg, in unison with screenwriters Rick Jaffa and Amanda Silver, got together to make the best possible Jurassic Park movie they possibly could. Not because they had money to make or deadlines to hit; like mountaineers who justify their perilous ascent of Everest: because it's there. The bones of Jurassic World lay deep within Michael Crichton's original novel: they just needed to be dug up, assembled and polished to perfection.

Jurassic World is the realisation of John Hammond's original dream: a fully operational dinosaur park, thriving and evolving and amazing. The flea circus made flesh, 65 million and 22 years in the making. But Hammond's vision writ large also comes with Hammond's hubris multiplied to the nth degree, meaning it was only ever a matter of time before history repeats itself and life finds a way once more; chillingly, Irrfan Khan's tycoon casually refers to an 'asset out of containment' as an "eventuality", like it was something baked into production of the park. That 'asset' is the Indominus Rex, a genetically-modified test-tube dinosaur bust loose, whose DNA is built from all the best bits of the best dinosaurs, much like Jurassic World is a cherry-picked selection of the trilogy's highlights. 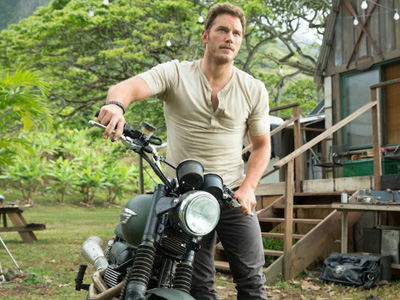 
The underlying philosophy in Jurassic World is explicitly stated several times over in the film, and acts a metaphor for the film itself. "No one is impressed by dinosaurs any more," sniffs Bryce Dallas Howard's prissy scientist, and she's right; we live in an age where the only limit to what can be created on screen is the imagination of the creator. The I-Rex - a "bigger, scarier, cooler" dinosaur created to boost attendance - is Jurassic World in microcosm: something new and sexy to get punters through the gates. The moral is fundamentally less striking than it was in 1993; if Jurassic World teaches us anything, it's 'Don't fuck with nature more than you already fucked with nature the first time'.

Narratively, Jurassic World plays it relatively safe, hugging close to the original template set by Michael Crichton like an over-eager uncle. You have the lab coats and fantasist corporate drones squaring off against the dirt-under-their-fingernails experts. You have the kids lost in the park, nephews in fact, and the mission to retrieve them. Emotional beats are played like bongo recitals; lots of characters inhabit the same archetypes and follow the same redemptive arcs. Stiffs loosen up. Assholes get bit in two. Nature crimps off a turd on science. You know the drill. Conceptually, this is a covers albums: Now That's What I Call A Jurassic Park Movie!

Trevorrow goes one better than rebooting Jurassic Park by also raiding the other two movies - remember them? - and picking their bones. The raptors in the grass scene from The Lost World? And then some. The birdcage from Jurassic Park III? Shook loose and cracked open. What's more, several disappointing aspects from the sequels are retroactively salvaged and improved upon, while the mythology and iconography of the original Jurassic Park is expanded on and revisited to a hugely satisfying degree (cameo alert: Mr DNA!). Jurassic World is fan service on a massive scale - American critics seem to be mistaking this for a bad thing. 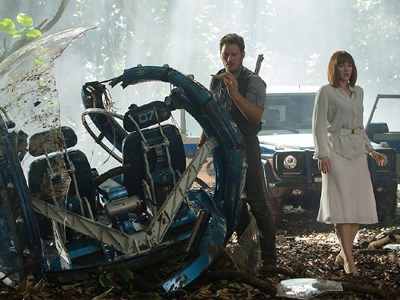 
Short of a cackling, Jeff Goldblum-esque wild card, the human cast of Jurassic World are a frustrating lot; broad archetypes on the whole that come together in largely uninspiring ways. Accusations that the movie is sexist are wide of the mark but are grounded in the relationship between Chris Pratt's hunky Alpha Male and Bryce Dallas Howard's uptight Lady Business, which clunks through every step. They both inhabit opposing theologies, him representing the raw power of nature, her the untapped potential of science, but their interplay occasionally comes across as outdated and embarrassing, and you may choke on the level of machismo that Pratt displays (fair enough, have him tinkering on a motorbike in his spare time if it comes into play later on, but having him pluck a fly from the air mid-conversation like he's Mr Miyagi? He's not Indiana Jones yet).

Pratt's character goes to great lengths to explain that you can't tame a wild animal, but all the while you suspect he's somewhat on a leash - granted, you can't have his character cracking wise while folks are getting ate, so at worst you can say he's miscast, at best he makes the most of some po-faced dialogue ("It's like taking a walk in the woods..." he says dramatically, "... 65 million years ago"). At least Howard's character has redemptive qualities, learning to embrace nurture if not nature thanks to rogue nephews Ty Simpkins (a great source of comedy) and Nick Robinson (Justin Bieber). Trevorrow also squeezes in some moments of levity between the carnage; "You're going to be just fine," Howard tells the kids, over the sounds of gunshots and dinosaur screams.

Really though, do people remember Jurassic Park for Alan Grant or Ellie Satler? Or do they remember it for the Rex and the raptors and the frilly-spitty-bitey one? Jurassic World's dinosaur cast is A-list: as well as the Indominus Rex and the domesticated raptors, you have the aquatic giant Mososaur (brilliantly utilised), some mad splice of Pteradon with huge snapping teeth and even a petting zoo full of baby Triceratops that you can ride around like donkeys (look for me there, I'll be the fully-grown man embarrassing himself in front of a group of six-year-olds). And let's just say if you're waiting for an appearance from a familiar face, you won't be disappointed. Jurassic Park is a movie that knows what you want and knows when to give it to you; it's a screenplay that's as smart as a Velociraptor but bites like a T-Rex.

You wonder where we go from here. A loose thread is explicitly left hanging, no doubt to be picked up and further explored in a sequel, but otherwise, you're left with the feeling that Jurassic World leaves it all on the field; an exhaustive culmination of everything that makes Jurassic Park movies good and true. No sequel or reboot could ever hope to live up to the spectacular original, but Jurassic World contains moments that come pretty damn close, visuals that almost rival Spielberg's own iconography in terms of goosebumps. It's not often I'm moved by a blockbuster, but as the strains of John Williams' theme played over the movie's end credits as dinosaurs once again rule the Earth, I felt that same prickle of excitement up my arms that I felt back in 1993. Films like Jurassic World are not just the reason why we go to the movies, they're the reason movies stay with us after we leave.

More:  Jurassic World  Jurassic Park  Colin Trevorrow  Chris Pratt  Bryce Dallas Howard  Ty Simpkins  Dinosaurs
Follow us on Twitter @The_Shiznit for more fun features, film reviews and occasional commentary on what the best type of crisps are.
We are using Patreon to cover our hosting fees. So please consider chucking a few digital pennies our way by clicking on this link. Thanks!