I read the NME quite a lot as a younger man, when they had proper bands with normal trousers and songs with choruses, but I never knew what an 'A&R man' was. On the basis of Kill Your Friends it must stand for Amoral & R... retributive? Ha! No, come to think of it you wouldn't have that as your job title; it wouldn't make any sense, particularly on a full industrial scale. What would your job description even be? I haven't thought this through at all. Ooh look, a film.


The antihero's not such a big deal these days. Yes yes, I am deliciously amoral and a product of an era whose culture champions personal achievement, I kill anyone who gets in my way and I talk straight to camera about it. All this has been done before, most recently in the Netflix House of Cards and most iconically, minus the overt fourth-wall demolition, in American Psycho. 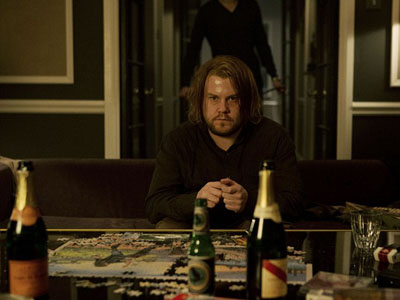 "What do you mean, the sole purpose of my late-night talk show is to create viral videos? I'll have you know it's- yeah no, fair enough."


Kill Your Friends is such a close cousin of Mary Harron's 2000 film that you wonder if it was created solely so that FHM could call it 'This generation's American Psycho', which it obligingly did, before spending its afternoon listing women in order of attractiveness and wanking into a promotional Hugo Boss toiletries bag. There's no problem with homage in general, but the naked desire to copy so totally the style, tone and visual grammar of another film that it directly forces comparison seems a bit futile.

It is interesting, though, to relocate the same story to nineties Britain and its contemporary music industry. Nicholas Hoult's Stelfox, who signs bands for a record label, has no interest in music aside from its commercial potential and is the enjoyably horrendous bastard you'd expect. The setting places Britpop within the same context of ruthless self-advancement as Manhattan investment banking in the eighties. This is not so wide of the mark: those around at the time might remember an ethos of achievement through self-sufficiency ("You've got to make it happen..."), a lot of debate about the weirdly arbitrary concept of who was "the best band in the world" and a newly-tapped market in which chart success was suddenly a realistic prospect for anyone with a big coat and a big chorus. As with any creative explosion, there was a lot of cut-throatitude backing it up.

Stelfox thrives in this environment, though quite why he bothers is never made clear. The trappings of Patrick Bateman's success were obvious but Stelfox's rewards are less so. He wants to advance and stay swimming in these shark-infested waters, but there doesn't seem to be a mountain of cash on offer as a prize; just status. The fact that he doesn't like music is key: it allows Kill Your Friends to divorce him totally from the saps who got into the music business for the love of it, and emphasise the satire on consumerism. It isn't a bluntly delivered social commentary or one without nuance, but it is the exact same one as American Psycho's. 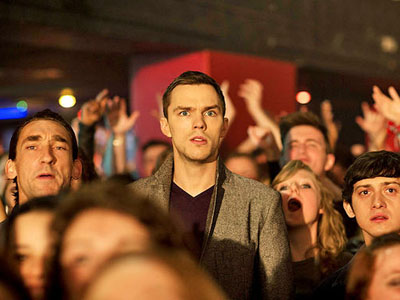 "This Menswear lot are the new Rolling Stones! I must sign them at once! But first more coke."


So he struts around, the Wolf of Wardour Street, coked-up and delighting at letting us know what a prick everyone else is while being a huge prick himself, and it's a very enjoyable watch. Several moments are laugh-out-loud funny. Hoult is a rascally presence, making us his co-conspirators through the asides to camera: we are complicit the second we laugh or grudgingly admire his chutzpah. (Interestingly, when he kills a dog it's done off-screen: we'll go with you after you've choked someone to death but leave any cute animals out of it, you MONSTER.) Georgia King, too, wrestles a decent amount of agency from a role that could've been nothing but tiresome male wish-fulfilment.

I don't think it's particularly great form to review a film mainly by comparison to another one, but Kill Your Friends feels like it's deliberately inviting me to. I enjoyed sitting through it but found it a hollow experience, because it doesn't so much as pretend it isn't trying to be another film. I think it has something to say, even; it's just exactly the same thing someone else has said already. Like going to watch a good covers band do some Phil Collins, Genesis and Huey Lewis and the News numbers. Sure, sounds like a good night, but there's a reason no one queues up for their autographs after.

More:  Kill Your Friends  Owen Harris  Nicholas Hoult  Georgia King  Craig Roberts  Tom Riley  Ed Skrein  James Corden  Joseph Mawle  Rosanna Arquette
Follow us on Twitter @The_Shiznit for more fun features, film reviews and occasional commentary on what the best type of crisps are.
We are using Patreon to cover our hosting fees. So please consider chucking a few digital pennies our way by clicking on this link. Thanks!