Please let's not ruin this. We have a great thing here: La La Land is the rare kind of spellbinding, wonderful film that has reviewers like me tripping over themselves to find new superlatives for describing it. It's simply flawless. But that means that there'll be an unholy inclination by some #hot-takers to put it down; to chip away at the film's perfect sheen just to say something "interesting". But can we just not, this time? Can't we just have this one? Don't we deserve to enjoy something this sweet and pure and lovely just for once? It certainly feels like it's been a while.


It's easy to see where the detractors will get their ammunition. In a world where perfect white people really get jazz, explore career success and sing and dance in perfect harmony, the marketing materials will have you believe this is saccharine cinema at its most sugary. But undercutting all of this is an unexpected taste of bitterness, conflict and regret. It's important to note that for all the perfectly in-sync toe-tapping and literally-floating-in-the-air idealism, wannabe actress Mia (Emma Stone) and frustrated jazz pianist Seb (Ryan Gosling) only sing when they have something to sing about, good or bad. When the couple go through their toughest times, the dancing stops altogether. 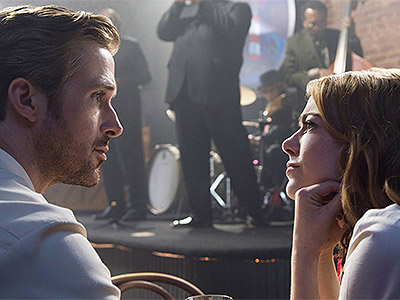 
It's Damien Chazelle's greatest hidden achievement here: in paying homage to the golden age of MGM classics, he doesn't just reminisce, he updates. Old is married with new, apparent in individual scenes when cell phones ring during the most traditional of routines, and, as a whole, in offering a more realistic, modern-day love story than the fairytale romances of Hollywood's past. It's an extraordinary balancing act, ultimately becoming both a timeless tale of universal truths as well as simply a musical about musicals.

It might seem like overstating things in a film that is essentially about two people meeting, falling in love and then having that love tested by their own career aspirations, but this is a film that wears its art on its sleeve. Themes are fully realised in every scene and pushed to the front for all to recognise. From the simple fact that Mia's acting career and Seb's penchant for jazz represent the two halves of the genre – performance and music – to dialogue that rings true on multiple levels. "How are you gonna be a revolutionary if you're such a traditionalist?" asks Seb's music buddy, John Legend, describing the contradiction in both jazz innovation and this film's difficult equilibrium. "It's conflict and compromise" Seb says, effusing passionately to Mia about jazz, unaware that he is also foreshadowing the relationship they're about to embark on.

It's that last theme of course that hits home the hardest: the dilemma between having your own identity and sharing it with another, gambling on which choice will make you most happy. It's a classic case of love vs career, but here it's writ large as dream vs ambition. And Mia and Seb are the fools who dream. 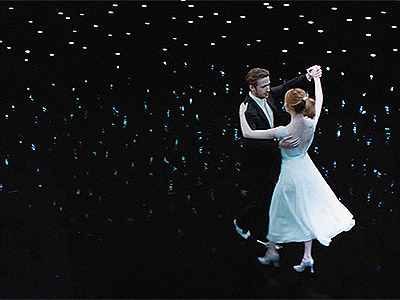 But look how beautiful the dreams are!


It almost seems pointless mentioning how brilliant Emma Stone and Ryan Gosling are in their roles, because of course they are. Resparking the same chemistry and charisma we have seen from them twice before, the ridiculously talented pair reach optimum on-screen couple goals here, putting no doubt endless hours of training and practice into seemingly effortless performances that channel joy and tragedy and everything in between. It’s easy to overlook just how naturally the duo embellish the film with flourishes of charm, sorrow, sardonicism and outright comedy – because among its other loftier accomplishments, it is also easy to overlook just how funny this film is.

There’s clearly a lot here to – fittingly - sing the film’s praises, and that means that any kind of contrarian backlash was inevitable. Because we can’t allow ourselves to have nice things. Don’t get me wrong, there are valid arguments to be made about whitesplaining and mansplaining, but arguably these are all indicative of the wider problems at large within Hollywood filmmaking. Judged on its own terms, within the confinements of its own story and execution, La La Land is unadulterated perfection. Let’s enjoy that.

More:  La La Land  Damien Chazelle  Ryan Gosling  Emma Stone
Follow us on Twitter @The_Shiznit for more fun features, film reviews and occasional commentary on what the best type of crisps are.
We are using Patreon to cover our hosting fees. So please consider chucking a few digital pennies our way by clicking on this link. Thanks!